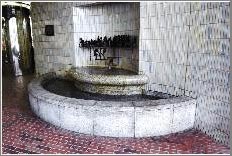 On the way to the Sengakuji temple, the Doge Oishi Yoshio was forced to surrender both the name of deputy Doge-rated Yoshida Chuzaemon and Tomamori Suemon (and the Morisuke-mon) to the large basis of the Sengoku Hoki Mamoru residence. After the report of the grave of the Lord was finished, the other workers appeared here, and it was entrusted to four houses of Hosokawa, Mori, Matsudaira, and Mizuno. "The Well of the Yoshiyoshi Senzoku" has been reproduced as a monument in the building.