Discover the city's attractions and the latest tourist information! Spots providing information that will make you love Minato City, Tokyo, even more! 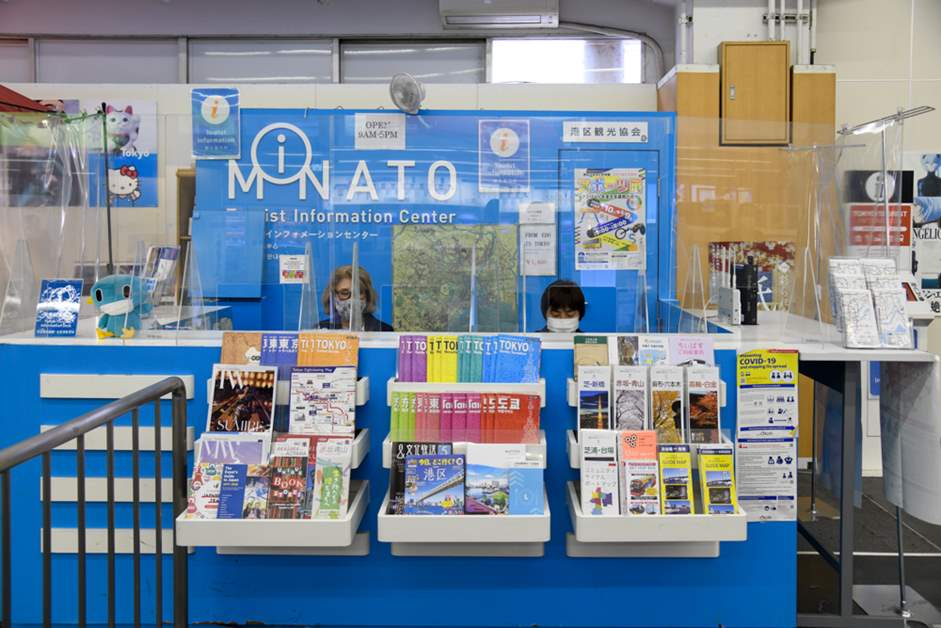 Minato City, Tokyo, has many attractive spots for sightseeing and shopping. If you have enjoyed window-shopping in Aoyama, experiencing art in Roppongi, and playing around with the attraction facilities in Odaiba, and you have committed the name “Minato City” to memory, we hope you will love this area even more! With that wish in mind, we will introduce four unique information dissemination spots in Minato City. Please visit Minato City to discover the latest news and attractions of the area.
*The information on this page is current as of April 20, 2021 (press release). There is a possibility that the reception hours will change or the facility will be closed. For details, please check the official website of each facility. *Please refrain from going out unnecessarily for the duration of the state of emergency declared.

[Hamamatsucho] Minato City Tourist Information Center This is the first place to get tourist information for Minato City!

The Minato City Tourism Information Center is a tourist information center operated by the Minato City Tourism Association. It is located right next to the ticket gates of Tokyo Monorail Hamamatsucho Station and is also adjacent to JR Hamamatsucho Station, so you can stop by when transferring from the Monorail to JR.
On the shelves at the counter, there are many pamphlets with tourism information about Minato City and Tokyo, as well as a wide variety of materials for inbound travelers. As the gateway for tourists visiting Minato City mainly from Haneda Airport, we ensure that visitors have a smooth sightseeing experience.
Among the many pamphlets available, five types of “Minato City Town Walk Course Maps,” which include model courses that can be completed in two hours and columns that explain the history of the city, and a "Minato City Sightseeing Map," which is also available in English, Korean, and Chinese, are very useful resources for sightseeing in Minato City.
Our staff, who are well versed in the area, will guide you with a smile about things that are difficult to understand from pamphlets and the web, such as how to get to nearby facilities and information on lodging and restaurants. The staff also speak English, and on some days, Korean-speaking staff are also on duty.
Free Wi-Fi is also available, so it is convenient for checking information. As the gateway to a city that attracts many tourists not only from Japan but also from all over the world, we aim to be a dependable presence. If you have any questions before sightseeing, please stop by.

[Toranomon] Shintorakoya (New Tiger Hub): A hub of activity in a city overflowing with Toranomon LOVE

Shintora-dori Avenue has been undergoing a major transformation in recent years as a result of the redevelopment of the Tokyo Champs-Élysées project. Located in the corner of the street, where traditional old stores and new spots with a young sensibility stand side by side, is the Shintorakoya.
The location is right next to Toranomon Hills. The natural interior design of the facility is relaxing, and it is well known by local residents as a center of activity in the city. The walls on either side of the building are crammed with “Toranohon,” books brought in one volume at a time by people involved in the area that they want everyone to read, making it a library for the town.
It also functions as a tourist information center, providing current information that can only be obtained from a local spot. In particular, the lunch map “60min” published by Goo Choki Partners, the company that operates this facility, is a free paper filled with lunch information recommended by people associated with Toranomon and a column project that conveys the love of Toranomon, so be sure to pick up a copy!
Unfortunately, it is currently suspended due to the COVID-19 pandemic, but the charm of the Shintorakoya lies in the variety of events it offers, such as events to learn about the wisdom of life, business workshops, and live comic performances.
In addition, the café space sells smoothies made by a registered senior nutritionist. The Shintora Curry with stewed pork cubes, which appears on the menu only once a week, is also popular.
Free Wi-Fi is also available, so it is a great place to rest your feet for a while.

In "Shin-Tora-Hut", three contents of "New Tiger Guide", "Hut Rice" and "Tora book" are developed. The "New Tiger Guide" distributes the area information paper around the Shinbashi Keizai Shimbun, and also serves as the tourist information office. In addition to providing curry for lunch, the "hut Rice" will develop special menus that collaborate with local eateries. The book of Tora is developed as a library of the city. The person who runs the shop in the area and the person who is doing the town-building activity become the book director, and it is said that "the book which everyone wants to read" is brought.

Roppongi is home to a variety of art and designer spots. One of them, the Tokyo Midtown Design Hub, located on the 5th floor of the Midtown Tower in Tokyo Midtown, is a base for the dissemination of design information, established in collaboration with four organizations: the Japan Institute of Design Promotion, the Japan Graphic Designers Association, Tama Art University Bureau, and the International Design Liaison Center.
It holds various exhibitions throughout the year as part of its information dissemination. These exhibitions are characterized by thematic displays that show the connection between society and design, such as approaches to social issues, efforts to link design and business, young designers, and overseas design activities that are not well known in Japan.
For example, in the 90th special exhibition held in April this year, “JAGDA Outreach Exhibition for Para Charity,” works by artists with disabilities were designed and displayed as utility goods. The exhibition also introduced collaborative charity work that had been carried out over the past three years, in which these practical products are sold and a portion of the proceeds are donated to the activities of para-athletes.
“In the difficult situation of the COVID-19 pandemic, we actively disseminate information such as gallery talks online as well. We have also launched a Tokyo Midtown Design Club where design lovers gather, and actively hold events and workshops both in real life and online.
The exhibition, with its passionate messages from the organizers and artists, will provide an opportunity to reaffirm the value and importance of design that lies hidden in various situations in the world.”

It is a base of the design network operated by three organizations responsible for design promotion, function, and research and education. We connect people through exhibitions and seminars that present a perspective on the lives and society of the next generation, and think about the future together through design.

[Shibaura] Minato City Center for Traditional Culture: Learn about the history of Shibaura through this photogenic building

From the Meiji to the Showa era, Shibaura was once a hanamachi district, bustling with tourists on pleasure jaunts and geisha. More than 150 restaurants and teahouses gathered in the current Shibaura 1-chome area, forming a single town. The Minato City Center for Traditional Culture was built in 1936 (Showa 11) as a kenban (an assignation office for geisha), and its very existence is a memento that tells the history of Minato City to this day.
The only existing wooden assignation office building in Tokyo, it has an imposing style that makes passersby stop in their tracks. With the impressive gable of the iriomoya roof and the cusped gable/karahafu of the entrance hall, the building is called “modern Japanese architecture” because it incorporates Western techniques and designs into traditional Japanese architecture.
After the war, when the Shibaura Hanayanagi circles declined, the building ceased to serve as a kenban, and later became a lodging house for workers in the bay area under the name of Kyodokaikan (the Collaborative Society Building). In 2000 (Heisei 12), the building was closed due to its deterioration, but citizens called for its preservation, and after two years of renovation, it was opened in April 2020 as the Minato City Center for Traditional Culture.
The exhibition corner on the first floor introduces the traditional crafts of Minato City. The exhibition room next to it explains the formation of Shibaura, which used to be a tidal flat, the history of Shibaura hanamachi, and the features and changes of this building. The digital guide, which can be viewed via QR code on your smartphone, also provides explanations in foreign languages.
The exchange room on the second floor is called “Hyakuzashiki” because it is 100 tatami mats in size, and used to be a performance room for geisha to practice their art. Traditionally, it has been used as a venue for rakugo (comic storytelling) performances and lectures on history and culture and is open to tourists as a resting place from noon to 2 pm.
During your rest in the café space, coffee and snacks will be served, so you can relax for a while. The time you spend in this historic space will be nostalgic and soothing.

Built in 1936, it is the last wooden geisha call-office building still remaining in Tokyo, and it is a Designated Tangible Cultural Property of Minato City. It was opened in April 2020 with the aim of passing down traditional culture and promoting the local community. Please come visit us!

[Discover the charm of Tokyo Minato City] is a short video we produced to introduce Minato-ku through four of the city's novelties: "Modernity", "Tradition", "Gourmet", and "Scenery". You can find a brief introduction to each of the facilities shown in the film on this page. We hope that you can get...