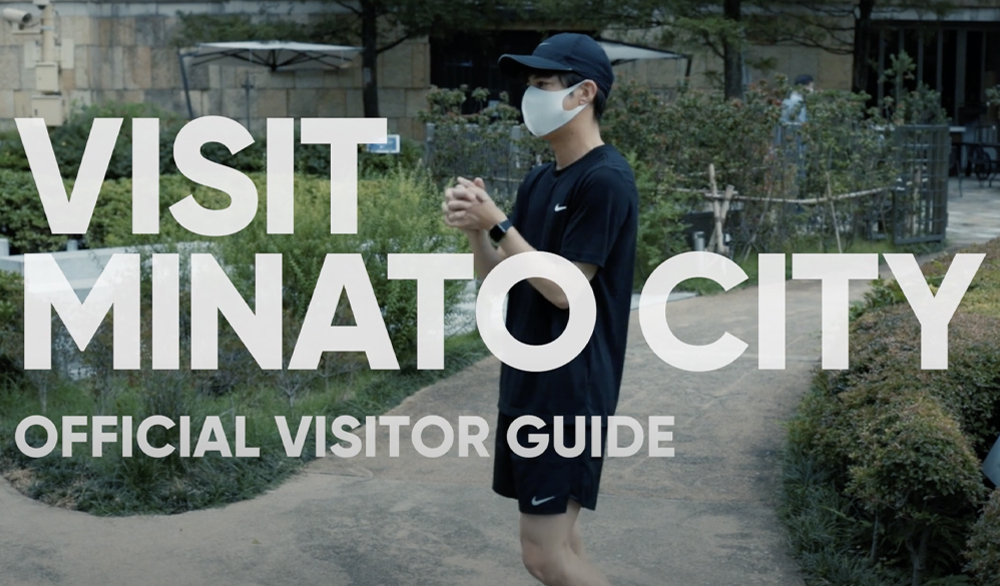 A "running trip" is when you go for a run on which you can admire the unfamiliar scenery of your destination. Tokyo's "Imperial Palace Run," which is famous nationwide, runs the perimeter of the Imperial Palace, but there are also some great running courses in Minato Ward, which is next to the Imperial Palace's Chiyoda Ward. Here, we will introduce two recommended courses for running in the morning after an overnight stay in Tokyo, or in the evening after a day of sightseeing. Why not go for a light run through the streets of Tokyo that were also the stage of the 2020 Olympic Games?

Our first recommended running course is about 3.5km and runs from Roppongi Hills through the Azabu Juban shopping district, then around Shiba Park, toward the finish line at Tokyo Tower. The starting point, Mouri Garden, has a grassy area that's perfect for warming up. Let's get started!
It's early morning, before the streets of Roppongi awaken. Descending the wood-lined slope, I feel a refreshing breeze, and I catch a glimpse of Tokyo Tower standing tall in front of me, as if it were poking through the sky. From there, I take a back road and run down Sakura-zaka, a gently-curved hill, toward Azabu Juban.
The Azabu Juban shopping street, which becomes lively before noontime, is still quiet at this time of day. I run along Patio Juban, and I'm seen off by the statue of Kimi-chan, the little girl who inspired the song "Red Shoes."
The terrain slopes gently downhill until Azabu Juban, where the road becomes flatter and flatter. After passing the Ichinobashi Bridge, which stands over the Furukawa River that flows from Shibuya, I enter the streets of Mita, which are lined with office buildings. The sidewalks here are wide and easy to run!
Crossing the intersection in front of Akabanebashi Bridge, I notice an Inari shrine on the corner. I take a moment to ask the god who watches over my hometown to make my day a pleasant one.
Running across the bridge will bring me to the goal of Tokyo Tower... but I want to enjoy running just a little bit more. After crossing the Akabanebashi intersection, I turn right to run around Shiba Park. Here I can see Tokyo Tower from every vantage point. It feels like I'm running under this bright red tower's watchful eye.
Although I planned to run around the perimeter of Shiba Park by passing through the magnificent Sankaidemon gate of Zojoji Temple, passing Zojoji Temple led me to find a nice straight path that looks up at Tokyo Tower! Here, I changed my planned course a bit and took a shortcut. I couldn't stop myself from getting excited at the sight of Tokyo Tower, which got closer with every step I took!
It was a challenging last spurt running toward Tokyo Tower, but I can do it!The end was pretty tough, but I could feel my heartbeat rising to its peak. Finally, I reached the goal!Tokyo Tower up close looks incredibly huge. I think I'll get some more exercise by walking to the top of the tower!

The second recommended course is a 3km course that starts from the Shibaura side of Rainbow Bridge and comes back over the bridge. Rainbow Bridge's promenade is a great running course. The starting point, Shibaura Pier, is a 7-minute walk from Shibaura-futo Station on the Yurikamome Line. It's also a 20-minute walk from Tamachi Station on the JR Line. The bridge really looks huge from up close!
You can take the elevator from Shibaura Pier to the promenade on the bridge. Admission is free. Rainbow Bridge has two pedestrian walkways: the North Route (on the Shibaura side) and the South Route (on the Tokyo Bay side).
Rainbow Bridge is a double-structured bridge, with the Shuto Expressway and the Harbor Road on one level and the Yurikamome Line on the other. The promenade on the Harbor Road level is 1523 meters long in just one direction. There are no vending machines along the way, so if you're concerned about running out of water on your run, be sure to bring a drink with you.
At its highest point, the bridge stands 52.3 meters above sea level. When you step out onto the bridge, it may feel a bit shaky due to the height and the noise and vibrations from cars passing by on the roadway. After a short walk, there's a rest area with benches around the bridge pier, where you can start your warmup exercises.
This space is a popular photo spot, where you'll see many people with cameras. Between the guard rails, you can see the Shinagawa Seaside and Oi Pier on your right, the Fuji TV headquarters and other Odaiba sights on your left, and the magnificent panorama of Tokyo Bay in the middle. Start running whenever you're ready!
Running beside the panoramic view will feel as though you're running in the sky. I was worried about the heat, but with the bridge's upper level serving as a roof over my head, the occasional breeze was just right to keep us runners cool. Rainbow Bridge looks great from a distance, but up close on the bridge, you can really get a first-hand feel for the bridge's pillars and cables, making for an impressive experience.
Along with the beautiful scenery, one of the attractions of this course is the fact that there aren't any stop lights, so you won't have to stop along the way. You can enjoy running alongside the Yurikamome line, which comes and goes again and again. Of course, there are pedestrians, so be sure to share the road with others when you pass by them.
There are many points on the bridge that have information on the history of Tokyo Bay, the Tokyo Port Tunnel, the Harumi Cruise Terminal, and other buildings in the area. Approaching the Odaiba side of the bridge, you'll be rewarded with a view of Odaiba Seaside Park, where the Tokyo 2020 Triathlon was held, and Shinagawa Daiba, the site of the Edo Shogunate's artillery emplacements from which the name "Odaiba" is derived.
Afterwards, turn around on the Odaiba side and head toward the North Route for the second half of the run. From here, you can enjoy a panoramic view of Rainbow Bridge, stretching out into a beautiful arc, and a view of Minato Ward with the warehouse districts of Takeshiba and Shibaura in the foreground. You can also enjoy a view of Tokyo Tower and Skytree together.
Take photos along the way, and finish at Shibaura Pier! The promenade is open until 9pm, so it's also a good place to go for a night run.

What do you think of the two courses, the Tower Run and the Sky Run, that we introduced in this running trip feature? The passing scenery when you travel by train or bus is sure to look different when you're running. If you have any recommendations for running courses, please send them to the Minato City Tourism Association!
Categories
Tweet

That "escape shame hug" was also born in Minato-ku ..., pilgrimage to the famous location in Minato-ku, Tokyo!

Now, more and more people are visiting locations and venues that have become locations for TV dramas and anime. So-called "pilgrimage to the holy place" boom. There is no place called "sacred place" in Minato-ku where most tv stations in Tokyo gather! That's why this time we will introduce famous lo...