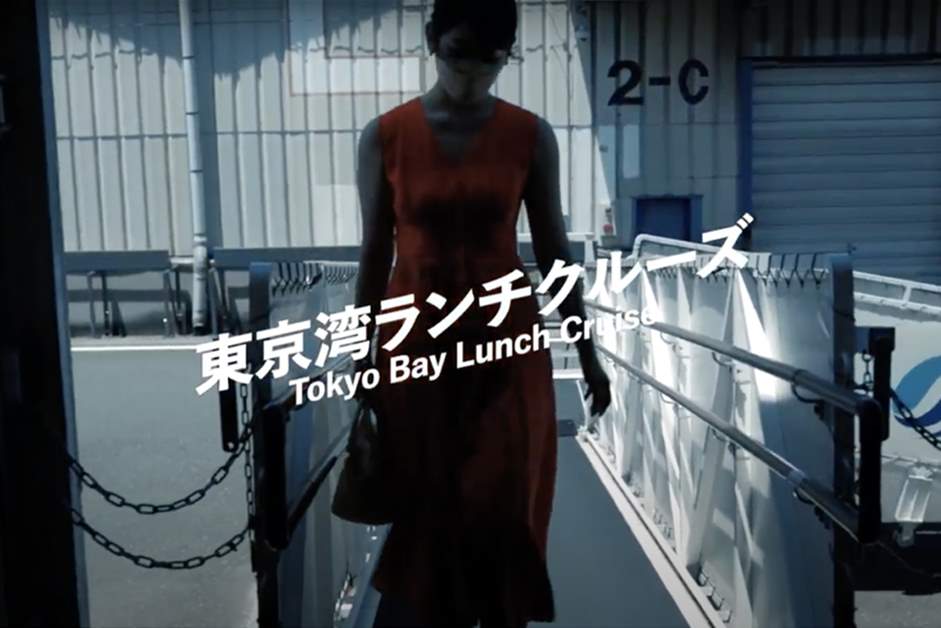 Everyone probably longs for going on a cruise. You might think going on a cruise takes many days on a luxury liner, but did you know that in Minato City, Tokyo, there is a restaurant on a boat where you can have such a trip in a just small time of watching a movie? The Tokyo Bay cruising restaurant, Symphony departs and comes back to Minato City's Hinode Wharf. Here, you can enjoy four types of Tokyo Bay cruises including lunches and dinners, and guests can enjoy meals on a luxury liner and supreme views from the ship. In this issue, we went on a lunch cruise for the first time to experience a trip on the Symphony. We introduce the appeals of the cruise ship that we experienced first hand!

You can dress casually! Enjoy a short cruise in Tokyo Bay

Symphony has four cruises daily (*1): lunch cruise, afternoon cruise, sunset cruise, and dinner cruise. The lunch cruise we are taking this time leaves the Hinode Wharf at 11:50 a.m. and returns to the wharf at 2:00 p.m. for a journey taking about two hours and ten minutes. Other cruises take between 50 minutes to 3 hours, so all the schedules are easy to incorporate into the itinerary for the day.

*With the state of emergency declaration, all cruises are suspended on weekdays until August 31st. On weekends and holidays, only lunch, afternoon, and sunset cruises are in service. (excluding group chartered cruises)
The boarding area at Hinode Wharf is one minute on foot from the closest station, Yurikamome line/Hinode Station. It is also walking distance from JR Hamamatsucho Station and Toeichikatetsu Daimon Station. On the day of the cruise, we went sightseeing to Zojoji Temple and Shiba Park in the morning and arrived at Hinode Wharf after 11:00 a.m. We could see the cruise ship outside a little, and we felt excited waiting for the boarding time at the waiting area.
The boarding process began and we went outside to the wharf. There, we could see a spectacular view of Symphony's amazing two ships, Classica and Moderna. The ship we were about to board was Moderna, a four story cruise ship with a total length of about 83m, with a capacity of 600 people. The other ship, Classica, is a three story cruise ship with a total length of about 70m with a capacity of 450 people, and is mainly used for chartered cruise parties. Nearby, there was a cute heart-shaped sculpture, so we took the first commemorative photo of the day with Classica on the background. We were led by crew who were wearing uniforms fashionably, and we went inside the Symphony from the gangway.
Inside of the ship had a luxurious interior design that felt like a "dream cruise ship." Still, there was no special dress code, so it felt friendly as we could board dressing casually. From the ship windows, we could see a 360 view of the waterside from Sumida river to Tokyo Bay.
The clock finally signaled the time for our departure. The sound of a gong echoed inside the ship and the scenery outside the windows started moving quietly. We could hear the excited voices of other passengers saying, "it moved!"

Aside from the afternoon cruise that takes about 50 minutes, Symphony is famous for taking a heart-shaped route going under two famous bridges: the Rainbow Bridge and Tokyo Gate Bridge. Because the cruise is so romantic, it is certified by the Regional Revitalization Support Center, NPO as the "Satellite of Lovers' Sanctuary." There are also wedding plans and "Operation Marriage Proposal" where the staff assists the "big moment in life." It is perfect for special date plans with valuable private moments with features like "Key of Love" where a couple can confirm their love, and private rooms "Aria" that can be used by up to four people.
With the excitement of departure still lingering, the ship quickly approached one of the highlights, the Rainbow Bridge. Usually, people look at Rainbow Bridge from a far, so the special experience of going under it on a ship was a strange feeling mixed with excitement and thrill. We took out our smartphones early not to miss this precious moment and took a commemorative photo.
After passing the Rainbow Bridge, we could see a special view of the whole city of Tokyo fitting under the bridge. We were moved by how Rainbow Bridge looked like an actual "rainbow" over the skyscrapers of Tokyo.

Living up to the name of a "cruising restaurant," the best thing about the trip on Symphony is how we can savor amazing meals while enjoying changing scenery from the windows. This amazing cruise offers a variety of courses on board including French food, Italian food, and sushi. Although sushi was freshly made by chef at the counter and was appealing, after a long thought we selected French food this time.
The authentic French food course is served plate by plate while the guest enjoys the changing scenery. All the meals were so pretty it made us hesitate to eat them. It was as if each plate was competing with the amazing scenery from the windows. The dessert plate was very cute with a chocolate plate that said, "SYNPHONY." It was heavenly for both the eyes and stomach♪
Guests can enjoy a relaxing meal seeing Oi Wharf's container yard where large freighters are anchored as well as the giant windmill of Tokyo Kazaguruma. After the meal, guests can go to the top deck where they can see the blue sky where seagulls fly and the majestically vast blue ocean. Then, the sea breeze brushing against the skin makes you feel an amazing sense of freedom.

The sea route then took us to the other highlight of the course, the Tokyo Gate Bridge. The bridge silhouette looks like there are two dinosaurs facing each other, so the bridge is also called the "Dinosaur Bridge." It is also a unique Symphony experience to be able to go under it. We heard a secret while on board that depending on the sea condition of the day, sometimes you can see the Tokyo Skytree in between the "dinosaurs." On this particular day, we could successfully see the Tokyo Skytree that looked like it was about to get eaten by dinosaurs.
We almost reached the turn around point past the Tokyo Gate Bridge. The ship went around the central breakwater and went closer and closer to the direction of Haneda Airport. We could see the control tower, the Terminal 2 building, and many airplanes stationed around it, and there were so many airplanes in the air landing and taking off. This needs no elaboration but you can only see Haneda Airport from this angle on the Symphony. Also, on this particular day, we could see a passenger plane that was about to land flying diagonally above the ship making a massive sound, which was spectacular. This is something we recommend to men and children who love transportation vehicles!
On the way back, we enjoyed a small concert by the soprano singer, Yu Iwata. We listened to the beautiful singing of Yu Iwata singing familiar famous songs. Before we got off the ship, we received the souvenir, Symphony Bear, and so we had fun until the very end.
All the three enjoyments on a cruise: scenery, meals, and events were packed in this two hour cruise tour on the Symphony Tokyo Bay Cruise. We looked at the watch and the time was still 2:30 p.m. It felt like we already had a day worth of fun, but we will do a little more sightseeing in the nearby Takeshiba and Hamamatsucho!

A restaurant cruise in the Tokyo Bay. Their ship the 'Symphony' was the first restaurant ship to begin operating in Tokyo Bay back in 1989. These days they have 2 ships in service, 365 days a year, providing guests a venue to celebrate their important occasions. The service's unique route travels through the Rainbow Bridge, and visits the Tokyo Gate Bridge, Maihama, and Narita Airport. The heart route has garnered attention as a popular cruise for couples.

Enjoy a walk in Tokyo with a video "Let's look up at the starry sky from Roppongi Hills Observatory!"

"Roppongi Hills Observatory Tokyo City View" regularly holds events to see the starry sky of Tokyo. The combination of romantic starry skies and stunning 360-degree panoramic night views is a must-see!Held at the Tokyo City View Rooftop Skydeck at a height of 270 meters above sea level, the Roppong...