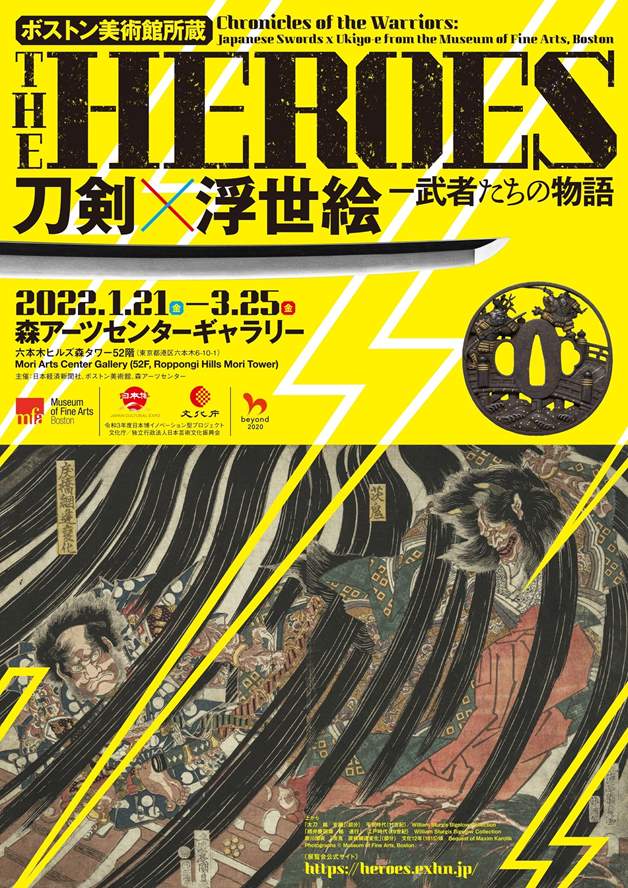 Musha-e refers to military chronicles such as "The Tale of the Heike" and paintings depicting heroes (heroes) appearing in valor legends, and in the Jiang dynasty, ukiyo-e depicting warriors gained popularity among people.
From the era of Hishikawa Shisen, who is said to be the founder of Ukiyo-e, to Utagawa Kuniyoshi in the late Eshi period, many ukiyo-e artists worked on warrior paintings, and many warlords such as Yorimitsu Minamoto, Yoshitsune Minamoto, Kenshin Uesugi, Shingen Takeda, as well as the valor of Susanoononoikoto and female warriors like Tomoe Gozen are also depicted.

The Heroes Swords Ukiyo-e - Tales of Warriors, a collection of musha paintings and treasured swords from the Museum of Fine Arts, Boston, which boasts the world×'s highest collection of Japanese art, has been decided to be held.
It is the first time in about half a century that the swords of the Museum of Fine Arts, Boston, which has masterpieces of swordsmiths who were active in the Heian period and the Middle Ages, have been introduced together in Japan.

[118 cool and powerful warrior paintings.] Kunisada, Kuniyoshi, Hiroshige are all exhibited for the first time in Japan! 】
From the collection of the Museum of Fine Arts, Boston, known for one of the world's leading collections of ukiyo-e, we will introduce warrior paintings of famous painters such as Hishikawa Shinobu, Kitao Masami, Utagawa Kunisada, Utagawa Kuniyoshi, Utagawa Hiroshige, Tsukioka Yoshitoshi, etc. according to the era of the story.
Musha-e has been widely popular throughout the ages because it has been traditionally handed down, and ukiyo-e, where heroes who colored history, were active in the Jiang dynasty, captured people's hearts.
In this exhibition, we will introduce the activities of various heroes while unraveling the common image drawn on the brim of musha-e and swords.

[Many famous swords return home from the Museum of Fine Arts, Boston for the first time in half a century]
From the Bigelow Collection, which is widely known for its collection of ukiyo-e prints, and the gift of Walter Compton, a world-renowned collector of swords that has recently been newly added, we plan to introduce swords that retain the name of Yasuna, who is said to be japan's oldest master craftsman, and the great swords of the long-term ship school that produced many masters in medieval Japan.
In addition, special exhibits of famous swords owned in Japan, including Genji's treasure "Tachi Origami Long-circle (light green)" (Heian period and 12th century private collection), which has various names such as knee circles, spider cuts, and light green, are also decided, and it is a must-see chance even if you are not a sword fan.