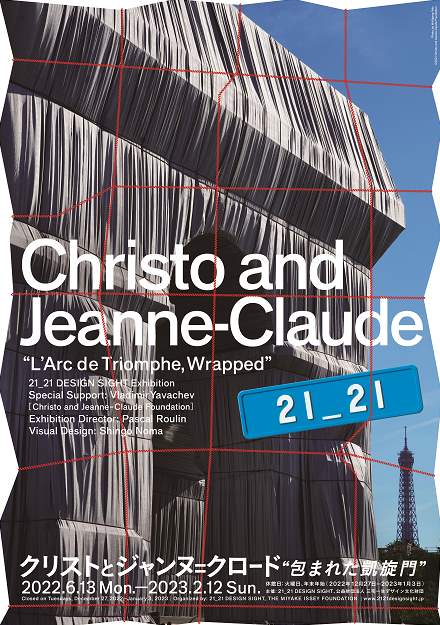 In September 2021, when the Arc de Triomphe in Paris was covered with cloth, the surroundings were enveloped in the cheers of the people. It was in Paris, where contemporary artists Christo and Jeanne = Claude met and took a step forward in their creative activities, and it was the moment when the project "LʼArc de Triomphe, Wrapped, Paris, 1961–2021" (Wrapped Arc de Triomphe), which was conceived in 1961 and was also a long-awaited dream, became a reality.
21_21 DESIGN SIGHT will hold a special exhibition "Cristo and Jeanne = Claude "The Wrapped Arc de Triomphe" from June 13, 2022 to February 12, 2023. Over the course of 16 days, the film explores the backdrop and long journey to realization of LʼArc de Triomphe, Wrapped, 25,000 m2 of recyclable blue cloth with a silver coating and 3,000 metres of red rope.
Born in separate places on June 13, 1935, the same day of the same year, Christo and Jeanne = Claude met fatefully in Paris in the autumn of 1958 and began their artistic career. He then moved to New York in 1964, where the two realized projects full of surprises around the world. Even after the death of Jeanne = Claude in 2009, Christo continued to work on creating the project they had dreamed of. The "Wrapped Arc de Triomphe" project was one of them. It was originally scheduled to be realized in 2020, but it was postponed due to the spread of the new coronavirus infection, and Christo passed away in May of the same year without seeing the completion. After that, with the cooperation of many supporters, it took 60 years from the conception to realize it in September 2021.
This exhibition is organized in cooperation with Vladimir Yavacev and the Christo & Jeanne = Claude Foundation. Using many archival images and videos, the cinematic expression of Pascal LeLan, the director and filmmaker of this exhibition, creates a new experience from the conception to the realization of the "Arch of Triumph Wrapped".
A positive and powerful attitude that overcomes various difficulties over a long period of time to realize it. In addition, it is precisely because of the presence of the friends who have gathered under such strong feelings that we can continue to produce works that no one has ever seen before. Christo and Jeanne = Claude's attitude toward the realization of their dreams will give them courage not only in art and design, but also in various everyday challenges.