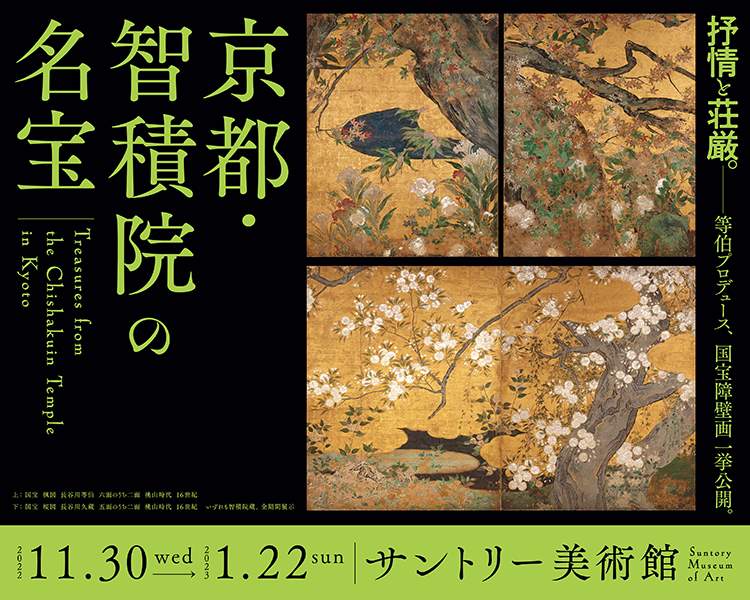 Chishakuin, located in Higashiyama, Kyoto, is the head temple of the Shingon sect Chizan school, which began with Kobo Daishi Kukai (774~835), and has about 3,000 Sueji temples nationwide. It inherited the legal rule of Kokyo Daishi Awakening (1095~1143), who is said to be the founder of Koyasan Nakaoki, and was founded in the middle of the Muromachi period in the mountain of Neraiji Temple in Kii Province, which later flourished. It declined temporarily under the administration of Toyotomi Hideyoshi during the Tensho period, but after receiving a donation from Tokugawa Ieyasu, it was revived in its current location in the early Edo period. Shounzen Temple, originally built to mourn the bodhi of Hideyoshi's fallen son, Tsurumatsu (Abandoned), was originally located here, and the famous golden blue barrier paintings painted by Count Hasegawa (1539~1610) and his son Kuzo (1568~93) have been carefully protected and handed down to this day under the generous protection of Chishakuin.
This exhibition will be the first time that barrier paintings known to everyone, such as the national treasures "Maple Maple" and "Cherry Blossom Drawing," will be exhibited simultaneously outside the temple, and will be a valuable opportunity to experience the gorgeous lyrical beauty of the Momoyama period. In addition to the national treasure "Kongo Sutra" and the important cultural property "Peacock Myeongwang Statue", precious masterpieces of Buddhist art that majesty the Buddhist hall and the "Women's Cafe Map" by Domoto Impression (1891~1975), which represents the modern Kyoto art world, will be exhibited in one place.