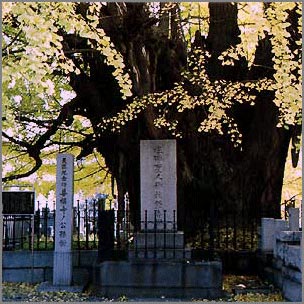 The ginkgo of Zenpukuji with a height of about 9m and a 19m high is popularly referred to as the upside-down ginkgo biloba. It is estimated to be about 700 years old and has been designated as the oldest one in Tokyo as a national natural monument. It is said, "The method of the prayer of the Nembutsu, and the birth of the afflicted, etc. or it is Zenpukuji" in the meaning that the cane of the ginkgo which had had it is set up in the soil of the precincts, and the Shinran who stopped by the legend is left the temple, and the cane is splendidly rooted , it is said that it grew up in big tree like seeing today. In addition, this tree, it appears to have died once after the end of the war, the designation of the natural monument has been cancelled, but there is a fact that miraculously revived becomes an unusual re-designation by the efforts of the chief priest.