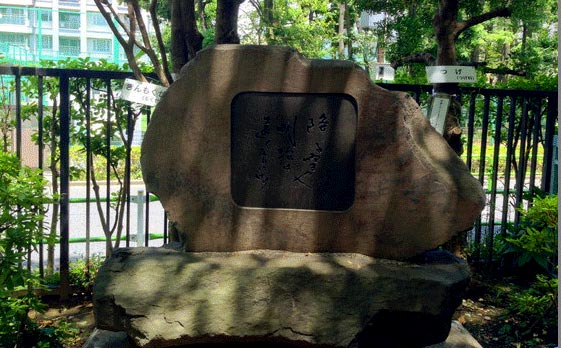 "The falling snow and the Meiji period are far away"--haiku poet Nakamura, a poet of the school yard in the main gate of Aominami Elementary School. This phrase is the one that it is written when it is a large student and it is a big-time visitor, and it is a representative of the man of the grass. The ceremony was erected in 1977 as the 70th anniversary of the founding of the blue-South small, and the unveiling is carried out by the hand of a man of the grass. Although he had repeatedly moved to China, Tokyo, and Matsuyama, most of the elementary school days went to the blue-South Elementary School (later Aominami Elementary School) in Akasaka-ku. After that, I visited my alma mater for 20 years Buri and was relieved to the appearance which did not change, but I saw the child who wore the cloak in the schoolyard as the snow began to appear, and felt the distance of me who was geta in the kimono.