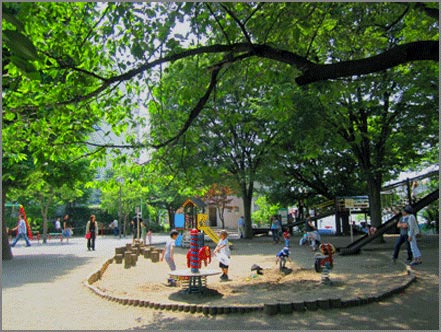 The area around this park was called "Kogai Town" after the "Kogai Bridge" which had been lost now. By the way, "Kogai" is a tool to care for hair (kanzashi). At the time of the rebellion of Tenkei (939 years), the legend of having crossed the bridge by giving the Kogai that the commander of the source of the Heian period was pointing to the sword as evidence to the person who blocked the traffic to the "Kogai Bridge" was established, and it became Kogai, and the accent of Koga Gumi and IGA Gumi There are various theories about the origins of this place name. In the park opened as a Minato Municipal park in 1970, there is also an elementary school in front of, and children who play energetically in such as wooden composite playground equipment and swings, sitting on a bench it is often seen the appearance of mothers who watch it.