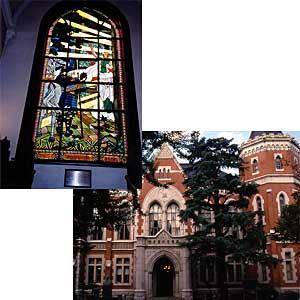 Fukuzawa Yukichi's Cram school moved from Tsukiji to Shiba Shinhave been zeni in the Meiji era (Keio 4) and was named Keio University in the era of the year. It is said that the school did not rest during the Battle of the Ueno Akiyoshi Corps. In the spring of 1871, we moved to the location of the ruins of the house of Shimabara feudal clan. The Keio Library, which was completed in April of Meiji 44 as the 50th anniversary of its founding, is a national important cultural property. It is a magnificent British-style Gozik architecture composed mainly of red bricks, and the staircase landing in front of the entrance is fitted with a stained glass containing Latin with a "pen stronger than a sword".