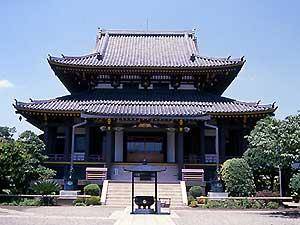 Shinshu Zenkoji Betsuin. Keicho 6 years (1601) The Tokugawa family was established in Yanaka as the Betsuin of Shinshu Zenkoji temple, but it was destroyed by a fire and was moved to Aoyama today. In the precincts, there is the monument of Takano Nagei by the before of Katsukaifune, and the Rickshaw invention monument that conveys the merit of Izumi Yosuke, who invented the rickshaw in the early Meiji era, Tokujiro Suzuki and Yukisuke Takayama. In addition, there is a reprimand in the main hall as well as Shinshu. Takano Nagei was imprisoned writing the "pipe dream" that sealed the shogunate's foreign policy, but fled to the machine prison Denmacho town, and insidious the various places. The face was burnt, the physiognomy was changed, and the false name of Sawa three White was used, and it was likely to be caught in the hiding place of Aoyama and was self-harm. In the land of hideaway and self-determination, the Aoyama spiral stands now. In the Deva, which is the temple gate, the statue of Jin is enshrined.