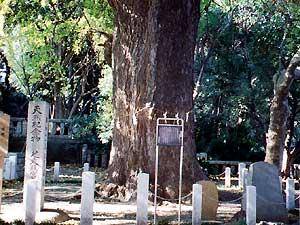 Kan'ei 16 years (1639) It is said that the three generations of shogun light planted at the time of the Toshogu shrine reconstruction. The shrine was burnt at the height of 25.5 m, around 6.45 m in the trunk of the base, and a large tree with 300 remainder of 9.5 m around the foundation, but Ginkgo biloba remains and the tree is still thriving. It is designated as a natural monument of the capital. The shrine of Toshogu, which was rebuilt after the war, is enshrined in the Tokugawa Ieyasu statue (capital tangible cultural property) that suggests the appearance of the lifetime.