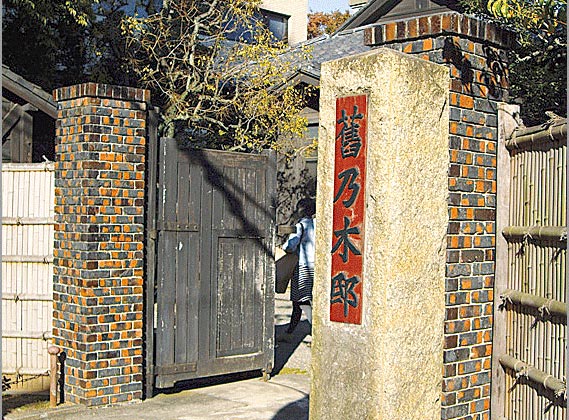 On September 13th, the day of the imperial funeral of Emperor Meiji during the first year of the Taisho Era (1912), General Nogi, a military officer of the Meiji period, and his wife committed suicide at the general's mansion. Before he studied abroad in Germany, the general had been a fashion-conscious person. However, after studying abroad, it is said that he became a military officer unmatched in seriousness. As a general's residence, this mansion is very plain. They say that the mansion created a sensation because it was contrasted with the relative splendor of a stable built of bricks. The inside of the mansion is open to the public every year on September 12th and 13th. Adjacent to the mansion stands Nogi Shrine. In front of the shrine is Nogizaka, which was formerly known as "Yureizaka." It was renamed "Nogizaka," at the same time as General Nogi's funeral, which was held during the first year of the Taisho Era (1912).
The Nogi mansion is in Nogi Park. In the park are large cherry trees, which delight visitors every year with their splendid flowers.
The Former Nogi Residence is open to the public (September 12th and 13th).