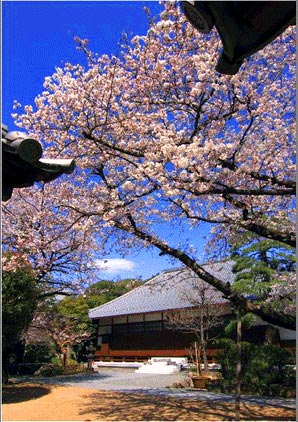 In July of the third year of the Ansei era, Dutchman Henry Heusken arrived in Shimoda together with Townsend Harris, acting as his right-hand man. He was active in the negotiation and signing of the Treaty of Amity and Commerce between the United States and Japan. His grave is a ward-designated historic landmark. Born in Amsterdam, Heusken traveled to America and, as Harris valued his ability in languages such as German and French, was then appointed in Japan. With a cheerful and openhearted disposition, well versed and discerning on the conditions in Japan, he was well known among the foreign residents of Edo. However, on his way back from the Akabane reception hall where he was interpreting for the Prussian ambassador and the Japanese delegation, he was attacked by a group of assassins near Nakano Bridge. He died at the age of 28 on January 15, 1861. Although the most famous old cherry tree of the old capital no longer exists, in spring the cherries and roses of Sharon on the temple grounds display magnificent blossoms.