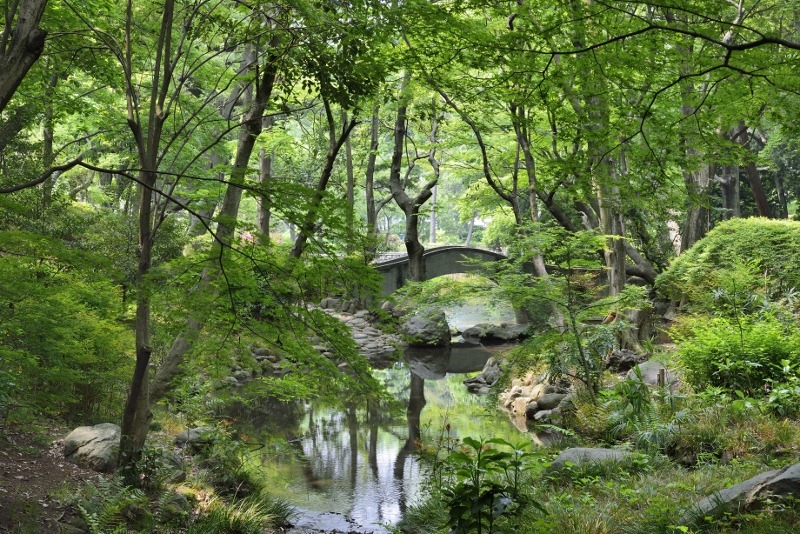 Spring is the season when it starts to get pleasantly warm and you get increasingly good weather for days out. This month’s article tells you about recommended spring days out in Minato-ku Tokyo so you can make the most of the beautiful spring weather in the capital. We are coming to the best time to see many flowers such as azaleas and flowering dogwood as well as, of course, the cherry blossom. Stop off at a cafe or restaurant while out for a walk and seek out some of the seasonal dishes available for a limited time. Why not look for a taste of spring at some of Minato-ku’s more well-known places from its famed wedding venue to an international location that makes you forget you are in the city? (There is a possibility that some of the events and activities mentioned in this article may be canceled or postponed due to the influence of the Coronavirus. Please check with individual venues for more detailed updates.)

Meiji Kinenkan  A garden bursting with fresh greenery against the backdrop of an elegant building with imperial heritage.

This year marks 100 years since the enshrinement of Emperor Meiji at Meiji Shrine. Meiji Kinenkan is the historical building in the outer garden. It was originally built in the 14th year of the Meiji Period (1881) as Akasaka Temporary Palace’s dining rooms in the location currently housing Akasaka Palace State Guest House. Later, in the 41st year of the Meiji Period (1908), it was reconstructed as the Onshikan at the residence of Japan’s first Prime Minister Ito Hirobumi in what is now Oimachi. Following that, in the 7th year of the Taisho Period (1918), it was moved to its current location in the outer gardens of Meiji Shrine and was renamed Meiji Kinenkan.
As dining rooms for the Akasaka Temporary Palace, the venue was used by the Imperial Council to hold deliberations on the drafting of the Meiji Constitution as well as hosting celebrations for the three main national holidays and dinner parties for visiting royalty from abroad. Currently, you can discover the noble history of the building in Kinkei, a banquet hall, and lounge in the main building.
In contrast to the refined decoration on the building's exterior, the inside of the building is a lavish affair showing off the best of modern Japanese luxury with chandeliers, and walls decorated with golden roosters. Also, in recognition of its historical value, in March of this year, the building was made one of Tokyo’s Designated Tangible Cultural Properties.
Also a highly sought after wedding venue, the hall has, up until now, held over 210,000 wedding ceremonies. However, as there are four restaurants, you are still able to pop in for something to eat and drink without booking. The venue also boasts a garden of 1000 tsubo (over 3305 sq. m) containing 2000 trees of over 50 varieties that change the look of the landscape with the seasons. The manager invites you to come and relax on the terrace while watching the gardener go about his daily duties. Come from mid-March to early April to see weeping cherry trees at their best.
For two months in March and April, each restaurant will offer a limited edition seasonal menu. Why not sample the spring flavors while enjoying the beauty of the garden?
Furthermore, as everybody is aware, the surrounding abundant greenery of the Meiji Shrine’s outer gardens is an oasis in the city. The rows of verdant trees such as ginkgo are picturesque in any season, so why not make a day of it and take a stroll in the gardens before stopping at Meiji Kinenkan for lunch.

The year is 1881. The "Constitution Memorial Hall", which is the main building of the Meiji Kinenkan was built, where the Guest House is currently located, as an annex to the temporary palace in Akasaka. This hall, where the Meiji Constitution Draft Deliberation was held in 1886, retains the original look of the tiled roof, fusuma (sliding wall panels) handles, nailhead covers, the chandelier globes, and more. The walls are adorned with the relief of a golden pheasant while the centerpiece is an impressive mantelpiece painted in black lacquer and attached with a large mirror. The car porch at the entrance of the main building is designed in the image of the imperial palaces in Kyoto and Omiya and retains its majestic features. Here, we offer you a peaceful and quality time that has been preserved over the ages to complement the crucial moments of your life.

Italian Town Take a walk through “Minato-ku’s Italy” and see the colors of primavera (spring)!

“Italian Town” was developed in district five of Shiodome Shiosite. Colorful buildings and cobbled streets modeled on Italy's historical old towns make you believe you are in Europe. Furthermore, in spring, the orderly row of camphor trees lining the street starts to sprout new leaves creating an exquisite scene alongside the planters of flowers.
Thanks to the movie “Roman Holiday”, Italy has become a country adored by many women. You can get a flavor of Roman Holiday's Italy in Minato-ku, Tokyo. Even the convenience stores and chain stores that you see all over Japan have adapted their look to become a true part of “Italian Town”.
Staff recommends coming to the town to get a sense of spring by doing a little light exercise in the plaza or stopping off at a bench to eat lunch or read a book away from the noise of the city. The area, which is frequently used as a location for TV dramas and commercials, offers many great spots to compose a scenic photograph.
Furthermore, from May 27th to 31st, you can visit “Shiodome Italian Town Neapolitan Pizza Summit 2020”, Japan’s biggest Neapolitan pizza event. As well as demonstrations and sales of pizzas such as margarita and quattro formaggi being cooked in an authentic firewood pizza oven, various kinds of Italian food will be available from booths and market stalls, and there will be various performances to enliven the event. For five days, “Italian Town” will look even more Italian. (Events may be canceled or postponed due to the effects of coronavirus.) This “Little Europe” is right next to Shiodome station. Why not get lost in the exotic atmosphere of this “Roman town”.

The Italian-style cityscape was created under the supervision of an Italian architect. Because it is a landscape that becomes a picture, it has become a spot that appears as a photography spot of commercials and magazines. Take a picture or have a cup of tea while you're in the mood for a trip to Italy.

Arisugawa-no-miya Memorial Park A surprising abundance of trees in the city center! A city park making the most of its varied landscape

Close to Hiro-o Station, Arisugawa-no-miya Memorial Park stretches over an area of land of around 6,7 hectares on the Azabu Plateau. In the Edo period, the residence of the Morioka Domain was situated in this area. Following this, in the 29th year of the Meiji Period (1896), the site of the residence of the Arisugawa-no-miya family was made public land and in the 9th year of the Showa period (1934), it became the memorial park. In the center of the park, currently under the control of Minato-ku, stands a statue of Prince Arisugawa-no-miya Taruhito who helped establish and played a major part in the Meiji government.
The geographical features of the plateau give Arisugawa-no-miya Memorial Park a charming landscape with constantly changing scenery. There is the beautiful sight of the trees reflecting in the pond, and in spring, you can see 11 species of cherry trees in bloom—including Someiyoshino and Yamazakura.
Staff recommends getting a photo of the weeping cherry blossom around the pond when they are in bloom but stress that you can take a beautiful photo anywhere in the park and suggest you take a walk around the whole park to enjoy the abundant nature and see trees and plants that are rare in the city such as violets and Japanese roses.
There are plenty of events for children. This spring, events include the “Cherry blossom stamp rally” from April 1st–12th, the “Mothers’ Day portrait contest from April 20th–May 10th, and the “Spring embassy tour: Get to know Olympic founders Greece better” event on May 27th. (Events may be canceled or postponed due to the effects of coronavirus.) Furthermore, as there are several supermarkets with deli counters in the area you can pick up some good-looking bento lunches and side dishes and enjoy a celebrated lunch in the park.
Also, in the middle of all this nature is the Tokyo Metropolitan Central Library which boasts the largest collection of books of all libraries in Tokyo. On top of this are extensive materials on the history of Edo and Tokyo, and exhibitions usually themed around a period in history so it is worth a visit. There is also a calming view of the city from the library cafeteria.

It is a Japan garden with a very good nature in the place where there was the shimoyashiki of the Asano family famous for Chushingura. It became the shimoyashiki of the Morioka clan Southern House in the Edo period, and went through the site of the Arisugawa Miyagai and Takamatsu House, and was lift down as a park site in Tokyo City at that time in 1934. More than 100 sakura trees are planted in the park, and all 11 types of Someiyoshino and Satcherry are introduced to the Guide board next to the Tokyo Metropolitan Central Library, "Sakura of Arisugawa Omiya Memorial Park". In the park, you can enjoy seasonal flowers such as dogwood and hydrangea, as well as plum blossoms and flower Kiyotaka Shobuda.

A meeting of trendy and historic! Minato-ku as a cosmopolitan city

In the present day, Minato-ku is a place where trends are invented; a center of commerce and business marked by rows of skyscrapers. This landscape, which seems completely normal now, looks completely different if we travel back in time 100 years. The place where Minato stands today has twice bee...