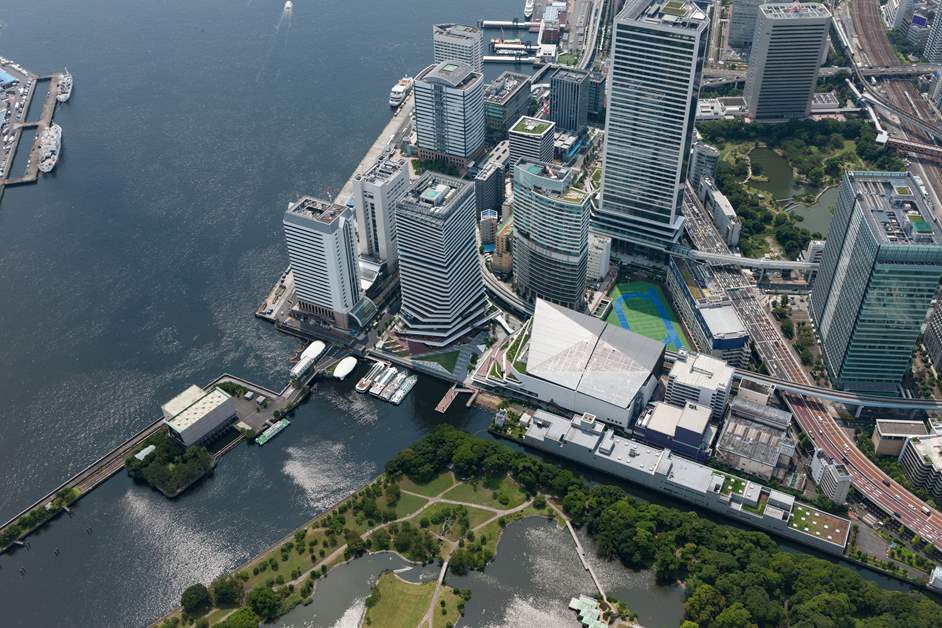 The Takeshiba area, just two stops away from the Shimbashi Station on the Yurikamome Line or a five-minute walk from the Daimon Station, is currently undergoing city-wide redevelopment. It is no exaggeration to say that it is the most rapidly changing area in Tokyo's Minato Ward. The Takeshiba Passenger Terminal, where ships to the Izu and Ogasawara Islands depart from, has long served as one of the gateways to the Port of Tokyo, and is home to a number of large facilities including luxury hotels, event halls, and the Shiki Theater. With the opening of Waters Takeshiba in June of last year, followed by Tokyo Port City Takeshiba in September, the landscape of the area has changed dramatically. In this month's special feature, we will introduce the charms of the new Takeshiba.

Tokyo Port City Takeshiba, newly opened in September of last year, is an international business complex consisting of a 40-story office tower and an 18-story residential tower. The lower floors of the office tower, which are directly connected to Takeshiba Pier through the Port Deck, an aerial pedestrian deck, comprise the Takeshiba Gourmandarium, a commercial area with about 20 cafes and restaurants, which can also be used for sightseeing purposes.
With the Port Hall event space, the Tokyo Metropolitan Industrial Trade Center Hamamatsucho Building and its exhibition and meeting rooms, and the Business Airport Takeshiba shared office, these facilities were developed with the goal of becoming the world's easiest place to do business, and are filled with smart features that will make you feel the cutting-edge of living and business.
One of the key points of the facility is the presence of robots that work in the building. For example, the LAWSON Tokyo Port City Takeshiba Store on the first floor is a hybrid store that employs both robots and people; the robots are remotely operated and are in charge of displaying products. The store's interior design is also unified with a futuristic image, quite a bit different from that of conventional LAWSON stores.
SQ-2 is an independent mobile security robot that patrols the museum. The way it rolls around the museum makes it look cute as it fulfills the role of security guard. It's amazing how moves around using the elevators!
The 6600 square meter skip terrace that extends from the second to the sixth floor is recommended for the warmer months of the year. With the concept of creating eight new pieces of scenery for Takeshiba's, they have created a scenery design including eight pieces of natural scenery: the sky, bees, rice paddies, incense, vegetable gardens, water, islands, and rain." have been designed to create a landscape with a sense of nature.
From the terrace, which has a resort-like atmosphere, are able to look out over the Takeshiba Pier and see Tokyo Bay and the ships docked there, as well as the Hamasaki Bridge Junction and the countless cars passing by. You are sure to find a spot you like as you walk around the museum and its outdoors area. That is the kind of place it is.

A new landmark in Takeshiba that opened on September 14, 2020. It is a large-scale complex with 40 floors above ground, and has not only offices, but also 21 restaurants, exhibition rooms, studios, halls, and other facilities. Skip Terrace, a symbol of the facility, is a relaxing space where you can feel nature while in the city center. As a "smart building" equipped with state-of-the-art technology throughout the building, it proposes new working style for office workers and comfortable use by guests.

Waters Takeshiba: The latest shops and a waterfront plaza—the new base of the Shiki Theatre Company

Waters Takeshiba, which opened last October, is a large-scale complex consisting of a commercial facility called Atre Takeshiba, a 265-room luxury hotel called Mesum Tokyo Autograph Collection, the three theaters of the Shiki Theater Company, called the JR East Shiki Theater [Spring] and the Jiyu Theater, and a plaza facing Tokyo Bay.
The concept of the facility developed on the north side of the Takeshiba area, near the Hamarikyu Gardens, is creating local bountifulness. Making the most of the waterfront and local greenery, they are carrying out a complex type of urban development centered on culture and art.
The facility is divided into a tower building and a theater building, with the first to fourth floors of the tower building, and the first to third floors of the theater building, acting as the commercial zones of Atre Takeshiba. In addition to nine restaurants and cafes, including Brauer Tafel, which serves foreign craft hard cider and oven-baked dishes, and the 3rd Burger, which is popular for its fresh gourmet burgers that are ground in-house, there are also nine shops, including Bio-Sevon, an organic supermarket from Paris. You will also find the luxury ocean view lounge B There, and six other entertainment facilities including BANK30, a luxury ocean view lounge.
In the theater building dedicated to the Shiki Theater Company, which was popular in the area from 1998 to 2017, opened as the JR East Shiki Theater [Spring] [Autumn]. The Spring Theater, which has a capacity of about 1,500 seats, is a large theater that follows in the footsteps of its predecessor, which was dedicated theater to playing “The Lion King," which broke many records for the longest runs, and is currently performing "The Phantom of the Opera" in April this year. "Anna and the Snow Queen," a musical based on the hit movie, is scheduled to be performed at the Spring Theater, which has a capacity of about
The plaza and terrace facing the waterfront are major features of this facility, and the grassy plaza adjacent to the landing area for the regular routes that circle the Sumida River, such as the TOKYO CRUISE (Himiko), the Urban Line, and the Tokyo Waterfront Line, is a space to relax and rest, and is lively with the comings and goings of tourists. People can also be seen chatting on the wooden terrace, which integrated with the stairs.
The Takeshiba Tideland near the plaza is used as a place for environmental conservation and restoration initiatives, to help creatures that once inhabited the Tokyo Bay may return to the area. Come out and relax here, where nature and the city merge, surrounded by greenery and water.

WATERS Takeshiba is a waterfront multiplex with a rich natural environment located in front of the Hamarikyu Gardens. The facilities include a 26-floor tower, a theater relocated from the Gekidan Shiki 2nd Theater, a plaza, and a 10-floor parking lot. Other than offices, the building houses the luxury hotel "Mesm Tokyo, Autograph Collection", the first collaboration between JR East Japan Group's Nippon Hotel and Marriot International, the commercial facility "Atelier Takeshiba" which offers a space that satisfies your curiosity for new creative works with the vision of providing "A playground for the senses", the new theater of the Gekidan Shiki that has nurtured culture and art in Takeshiba for a long time, "JR East Japan Shiki Theater [Spring] [Autumn]", the "Takeshiba Wharf" that makes full use of the riverside environment, the "Takeshiba Mudflat", and more. We will continue to focus on developing the multiplex as a base from which to promote culture and art by making full use of the riverside environment.

Hi-NODE TOKYO HiNODE PiER at Hinode Pier, which is connected to Takeshiba Pier via bridge, opened in 2019 together with the construction of the third pier. The facility integrates a waiting area for cruise ships and other vessels, a restaurant with an ocean view, and a grassy plaza into one. It is attracting attention as a new place for local exchange.
The facility brings together top-notch creators and combines the value of boating with interpersonal interaction. Enjoy a panoramic view of Tokyo Bay and its surroundings, including the Rainbow Bridge and the streets of Odaiba, from the wooden deck of the distinctive triangle-roofed building. The urban seaside location has a romantic atmosphere, like any you might see on TV or in a film.
The grass plaza is filled with the sounds of nature, from the forests, animals, and the beach, creating a calm space in the center of the city. It is a place where families and others can relax. There are also parasols and a stage-like deck where various regular events are held.
The two story building is home to restaurants with great views. BESIDE SEASIDE on the first floor is a restaurant and cafe where you can enjoy a variety of European dishes based on Italian and Spanish cuisine. You can also enjoy barbecue on the terrace. BERTH ONE on the second floor is a multi-cuisine restaurant that uses hand selected ingredients. This restaurant also has terrace seating, which is perfect for a mature night out.
At night, it is lit up, giving it a completely different atmosphere. The panoramic view from Takeshiba Pier will set the mood and adds new color to the Hinode Pier after the sun sets.

Hi-NODE is a new facility facing Tokyo Bay that connects regions and regions, people and people, and now and the future. A lawn plaza surrounded by trees, a café and restaurant with a terrace overlooking the sea, and a bridge connecting sunrise to bamboo turf in fantastic light at night. Surrounded by the sea, although it is located in the city, this Hi-NODE creates a new relationship between the seaand the living.