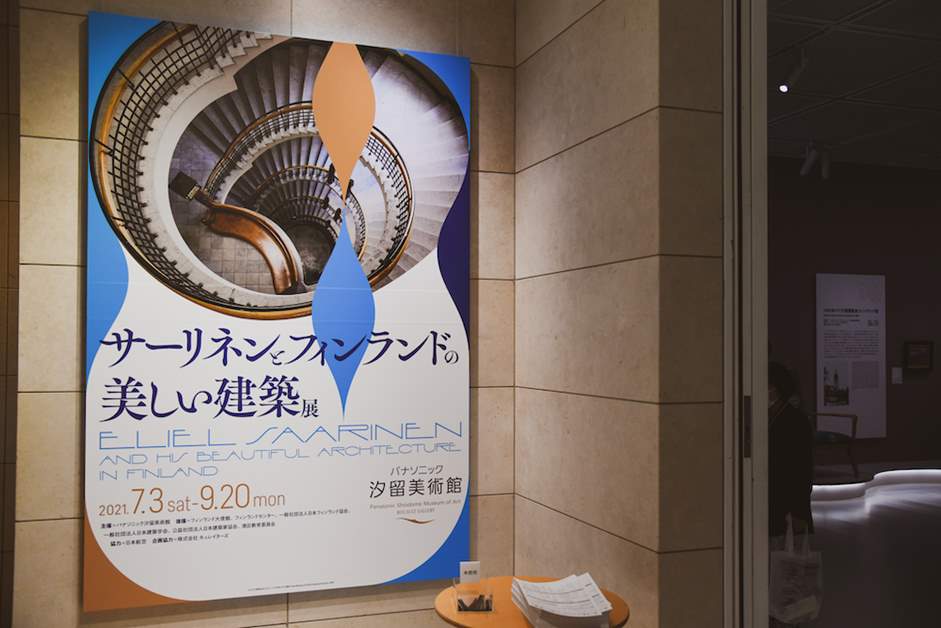 “Saarinen and His Beautiful Architecture in Finland” opened July 3rd at the Panasonic Shiodome Museum of Art. The exhibition, which runs until September 20th, is the first in Japan to cover Eliel Saarinen, who worked from the beginning to the middle of the 20th century, creating unique architecture that merged traditional Finnish and modernist designs, becoming a heroic figure in Finland. Along with actual reporting from the exhibition, this report will introduce the highlights of this exhibition that fans of Northern Europe will be sure to not want to miss.

The first retrospective exhibition of this Finnish national hero

When thinking of Finnish designers, the name of Alvar Aalto (1898-1976), the designer of many famous buildings and products, comes immediately to mind. But this exhibition focuses on the master Eliel Saarinen (1873-1950), a predecessor of his that he is said to have greatly admired. When considering that he worked on such national symbols as Finland’s National Museum, and Helsinki Central Station, it is understandable that he is given the honor of being known as the person who built the foundations of modernism in Finland.
Born in 1873 in Rantalsami, a town in the east of Finland, at the age of 20 Saarinen entered the Archaeology Department of the Finland University of Technology. Along with his friends Henrik Gesellius (1874-1916) and Eliel Lindgren (1874-1929), he established the GLS Architectural Firm. Within the overall trend of art nouveau, they added traditional Finnish accents to create National Romanticist architecture, and in 1904 moved with their families to Hvitträsk, a studio and home near Helsinki. After making the many masterpieces that are presented in this exhibition, in 1922 he took second prize in a competition to design the Chicago Tribune building, motivating him to move to the United States the following year at the age of 49. He remained there until his final years, treating the United States as a base from which to create great works internationally.
The exhibition is made of four parts, which track Saarinen’s steps while he was in Finland. His diagrams and photos, as well as furniture and textiles that he designed are on display. When entering the exhibition, one can hear the symphonies of Jean Sibelius, the famous Finnish composer who was a contemperoryry of Saarinen’s. The sounds will pair with the sights to pull you in to the atmosphere of Finland.

Kalevala, a work which became the basis for Finnish artists.

In the opening prologue, visitors will see a display about Kalevala, the Finnish national epic that had great impacts on the works of Saarinen and Sibelius. The writings, published by the Finnish doctor Elias Lonnrot (1802-1884) in 1835, when Romanticism (a form of art rejecting Classicism by focusing art on feelings, individualism, and nature) was popular across Europe, is a collection of traditional poems written not in Swedish, the official language at the time, but in native Finnish.
Kalevala means “the land of a tribe of brave warriors”. The story tells the adventure of four heroes who fight for treasure. As a symbol of national pride, the story would become a motif for artistic works by Saarinen, Sibelius, and Axel Gallen, the hugely important Finnish painter of the time. A few episodes about these artists are introduced in the exhibition.

Becoming a national hero after his performance at the 1900 Paris Expo.

In the first section “Finland Independence Movement”, displays focus on how young Saarinen gained fame through his honors at the 1900 Paris Expo.
Saarinen and his friends were in charge of designing the Finland pavilion at the 1900 Paris Expo, which would receive over fifty million visitors. Featuring a variety of characters from Kalevala, native animals, and motifs from Finnish history and climate, the pavilion was an example of National Romanticism, and its creativity received wide praise both domestically and internationally. Because of this acclaim, the three came to able to work on large Finnish projects, such as the Pohjola Insurance Company building and the National Museum of Finland. Additionally, the success of the pavilion also led to the strengthening of Finnish national sentiment, which eventually led to the independence of Finland from the Russian Empire in 1917.
The second section, “Hvitträsk, A Collaborative Project”, is focused on Hvitträsk, which was the spot for creativity for Saarinen, Gesellius, and Lindgren, and features a variety of the furniture that Saarinen worked on.
Hvitträsk, built over three years on the shore of a wooded lake, would become both a place of creation as well as a home for the three men and their families. With a similar philosophy to the British Arts and Crafts movement, both the building and furnishings showed a sense of Finnish style, which can be felt by the items on display, such as chairs and candle holders.
This design, mixing art and industry, can be said to have been the start of Northern European product design. In this area, the dining room of Saarinen’s cottage has been recreated. All of the warm, original wooden chairs are beautiful to look at.

The third section “Residential Architecture” is devoted to what could be said to be GLS Architecture’s core work- individual and collective residences.
As can be seen in the elevation views of the Olofsborg residential and commercial complex, collective residences featuring a sense of change and rhythm with high towers became a trend in Finland at the time. Visitors can see that the influence of National Romanticism waned, and the famed young Saarinen focused on making each new project in new ways.
In designing the architecture of private dwellings, such as Suur-Merijoki Manor and Vittorp Manor, GLS placed their distinctive granite entrances and plaster walls, which breathed fresh air upon the design of Finnish homes, which were at that point mainly log houses. As Saarinen and co. would regularly design the interiors a furniture as well, there are displays with the interior decoration also on display. The designs are wonderful, with the usage of Finnish nature and climate being regularly used as motifs also shows a clear through line to current Finnish design.
After that, in the fourth section “Large Public Projects”, light is shone on Saarinen’s work on the national stage, such as Helsinki Central Station, and a proposal for the Finnish National Parliament, before moving on to the epilogue “America, a New Stage”, which focuses on Saarinen’s life there from 1923 until his later years. Towards the end there is also a display focused on his son, Eero Saarinen, who was active in the American mid-century era, leaving the visitor with much to see right to the end of the exhibition.
There is also a video approximately seven and a half minutes long that introduces viewers to a variety of Saarinen’s works. Watching the video and following the flow of great achievements, after viewing the exhibition, might be a good way for visitors to deepen their understanding. Also, in the museum shop there are a variety of products and goods with Northern European designed goods, so be sure to check them out!

“Eliel Saarinen and His Beautiful Architecture in Finland exhibition” runs at Panasonic Shiodome Museum from July 3rd to September 20th. It is a wonderful chance to understand the beginnings of modernism in Finland, and is a must-see for fans of Northern Europe.

Finland is a Nordic country known for its beautiful forests and lakes. Eliel Saarinen (1873-1950) was the origin of Finnish modernism, which has many fans in Japan. Saarinen made a splendid debut with the establishment of a design office with Geselius and Lindgren, who met while studying at the Helsinki Institute of Technology, and the architecture of the Finnish Pavilion at the 1900 Paris World's Fair was well received. The early style of the work was an art nouveau influence that expressed the unique cultural roots of the people, known as National Romanticism, and inspired the Finnish people who were seeking independence at the time. The three of them eventually created Vitresk as an ideal place to live and work together in quiet nature and interact with artists. Saarinen's increasingly wide range of design activities, such as residential, commercial, public, station and urban design, were hand in hand with the modernization of the first half of the 20th century. Its style ranges from an early style that seeks ethnic roots while accepting diverse cultures, to modernism that seeks to present a new Finnishness through its own form. This exhibition highlights the Finnish period until his visit to the United States in 1923, and introduces drawings, photographs, furniture, and life designs through exhibitions. Saarinen's design, which is always in search of innovation, rooted in nature and climate, and with light and shading and rich expressions, will speak deeply to our minds today, when we are at a time when we can stop and reconsider the way we live. * In order to prevent the spread of the new coronavirus infection, please cooperate with the date and time designation reservation on the reservation site. For details, please check the Panasonic Shiodome Museum website from the following URL.

Taro Okamoto, a genius artist known for his masterpieces such as "The Tower of the Sun" standing in the Expo '70 Commemorative Park in Osaka, and "Myth of Tomorrow" exhibited in Shibuya Mark City, greatly influenced the avant-garde art movement of the 20th century. Did you know that there is a home ...

KAWS TOKYO FIRST, the first large-scale exhibition in Japan by artist KAWS who is actively based in Brooklyn, New York, will begin on Friday, July 16th at the Mori Arts Center Gallery in Roppongi Hills, Minato-ku. This exhibition, which will be held until October 11th (Monday), has garnered a lot of...