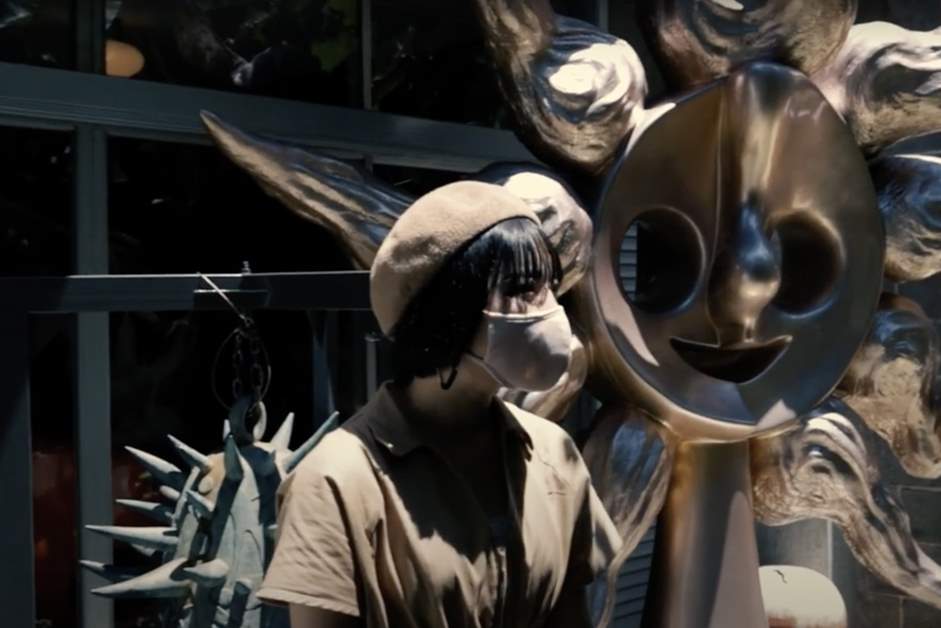 Taro Okamoto, a genius artist known for his masterpieces such as "The Tower of the Sun" standing in the Expo '70 Commemorative Park in Osaka, and "Myth of Tomorrow" exhibited in Shibuya Mark City, greatly influenced the avant-garde art movement of the 20th century. Did you know that there is a home and atelier in Minato-ku, Tokyo, where he lived for more than 40 years until the end of his life? The building is now open to the public as the "Taro Okamoto Memorial Hall", and in it, you can feel the real Taro Okamoto through the space, which has been preserved the same as when he lived in it, and his numerous works on display. Taro Okamoto was known for saying "Art is an explosion". He poured his soul into art. I visited this very building in Minami Aoyama to feel the power pouring forth from it.

A base for life and art, where genius artist Taro Okamoto lived until his later years

The "Taro Okamoto Memorial Hall" is located in a corner of Minami Aoyama 6-chome Omotesando, about a 7-minute walk from Exit A5 of Tokyo Metro Omotesando Station. The building with the giant "eye mark", which often accompanied Taro's signature, was built by connecting the old building, which houses Taro Okamoto's home and atelier, and the new building, which was rebuilt in the place where the sculpture workshop and library were. The old building was designed by Junzo Sakakura, an architect and leader of Japanese modernist architecture who studied under Le Corbusier, a world-famous master of modern architecture of the 20th century. Both buildings feature a roof facade with "a unique shape, like an eye", which is a typical theme of Okamoto's work.
Let's take a quick look at Taro Okamoto's life before entering the museum. Taro Okamoto was born in 1911 in Takatsu-mura, Tachibana-gun, Kanagawa Prefecture (currently Takatsu-ku, Kawasaki City) as the eldest son of Ippei Okamoto, a manga artist, and Kanoko Okamoto, a novelist. When he was 18 years old while attending school (currently the Tokyo University of the Arts), he moved to Europe while accompanying his father on a business trip to London. After that, he worked in Paris for about 10 years as an artist. He was impressed by Picasso's paintings, and built deep friendships with abstract and surreal painters, and in doing so polished keen sensibilities that would lead the Japanese avant-garde art movement.
He returned to Japan in 1940 as a result of the agitation caused by World War II. He would soon be called up by the Japanese army and then sent to the Chinese front of the Pacific War. He was discharged from military service in 1946 after spending half a year as a POW in China. After resuming artistic activities and setting up a work base in Setagaya, he set up his home and atelier in this place where he once spent time with his parents in 1954. After that, he lived here for about 45 years until passing away in 1996. Many of his works were born here.

A Salon and Atelier where you can meet a full-scale "Taro-san"!?

In this memorial hall, based on a home and atelier, is a spot you can feel the real Taro Okamoto through his actual living space and numerous works. When entering the museum and finishing at the reception, the first thing to welcome visitors is the sculpture of the "Jomon people". Having studied ethnology in Paris, Taro Okamoto was shocked by the modeling of Jomon pottery that he saw at the Tokyo National Museum in Ueno after the war. He found artistic value in Jomon pottery that up until that moment had not been seen as anything other than archaeological objects.
The two rooms on the right after the entrance of the old building are where Taro Okamoto lived. The first thing one sees is the salon used for reception and work meetings. In this space that retains remnants of the time when Taro Okamoto lived, his works such as "Tower of the Sun" and "Chairs that deny sitting" are gathered in a narrow space.
On top of the "Hand Chair" found to the right is a portrait of Taro and his adopted daughter and lifelong partner, Toshiko Okamoto, as if to imagine what he was doing during his lifetime. On the left hand side, there is a three-dimensional figure of Taro Okamoto as if to make one think, "Is that the real Taro?"This is Taro Okamoto's mannequin, made to scale. Surprisingly, he himself went into the silicon to create the mold.
According to the staff, the entrance is now on the south side, but in the past it was on the north side. It is said that the living room where he wrote and the kitchen on the second floor of the old building, which isn't open to the public, are still left as they were at that time. I wonder if Taro would've greeted me with "Welcome!" when I was passed through this sunny room from the entrance. When I thought about it, I started imagining the kind of conversations that happened here.
The atrium room in the back is an atelier where many paintings were created. The shelves contain a huge amount of canvas in the memorial hall. Some of them are said to be unfinished, and some are one picture painted on top of another finished picture. Most of the oil paintings since 1954 were drawn here, and it is said that the concept of the "Tower of the Sun" was also refined here.
The brush on the table and the paint stains scattered all over the floor remain as they were in the past, as if you can still feel the breath of Taro Okamoto. Because it remains like that, its power inspires the viewer's sensibilities. Furthermore, the bookshelf on the second floor is packed with difficult-looking books. There is a piano next to the entrance, an unexpected skill of Okamoto's. His entire world is condensed in one space.
Junzo Sakakura designed the Okamoto residence because of the friendship between the two, which deepened during their era in Paris. Taro didn't make too many requests for the plans, but he requested that the atelier window be made on the north side so that he could immerse himself in his work regardless of the direction of the sunlight.

The second floor of the new building, found after climbing the stairwell decorated with famous portraits, is a room for special exhibitions. Here, Taro Okamoto's work can be fully enjoyed, with various different themes each time. A special exhibition titled "The Face is the Universe" is being held until November 14th. For Taro Okamoto, who drew many "lives" throughout his own, the "face" was an important motif that appeared in every work. Not only oil paintings, but also masks and ceramic works are exhibited here. Surrounded by various "faces", you will feel enveloped the world of Taro Okamoto.
After you're done in the building, head to the garden in front of the old building. Even in the garden where many tropical plants grow, many works by Taro Okamoto are scattered as if playing hide-and-seek. From the veranda one can see the Tower of the Sun peeking out! So cute.
As a small bit of trivia, there are actually no blooming plants in this garden. Taro Okamoto, who made "a chair that rejects sitting", said that "chairs have shapes that makes it easy to sit on, but that's just them flirting with humans." As for flowers, he seemed to hate putting them in the garden, saying that "beautiful flowers are flirting with humans." I felt Taro Okamoto's unwavering commitment until the very end.
During my visit, I felt that there were many young visitors who weren't yet born during Taro Okamoto's life. Even now, special features about him are often run on TV and magazines, so I've felt the awesomeness of the writer Taro Okamoto who continues to attract people's attention over the ages. The "Taro Okamoto Memorial Hall" is a place where you can be energized by works of art brimming with passion, and the spaces they have created. After the tour, be sure to take a look at the unique Taro goods as a souvenir. Nearby is the Nezu Museum, where you can see masterpieces of Japanese and Oriental art, and Kotto-dori, where fashionable stores line the street, so enjoy a whole day of art in Minami Aoyama.

After Taro Okamoto (best known for the Tower of the Sun built for a world's fair) died, the atelier and home he worked out of for almost 50 years was converted into this memorial museum. The incredibly expressive artworks in the garden and the unfinished canvases that decorate the atelier almost make you feel like Okamoto were still alive. This space that overflows with creative energy will allow you to truly experience the essence of art.

“Saarinen and His Beautiful Architecture in Finland” opened July 3rd at the Panasonic Shiodome Museum of Art. The exhibition, which runs until September 20th, is the first in Japan to cover Eliel Saarinen, who worked from the beginning to the middle of the 20th century, creating unique architecture ...

KAWS TOKYO FIRST, the first large-scale exhibition in Japan by artist KAWS who is actively based in Brooklyn, New York, will begin on Friday, July 16th at the Mori Arts Center Gallery in Roppongi Hills, Minato-ku. This exhibition, which will be held until October 11th (Monday), has garnered a lot of...