That hug scene in The Full-Time Wife Escapist was also shot in Minato Ward…, Make a pilgrimage to sacred spots: famous movie and TV drama locations in Minato Ward, Tokyo! 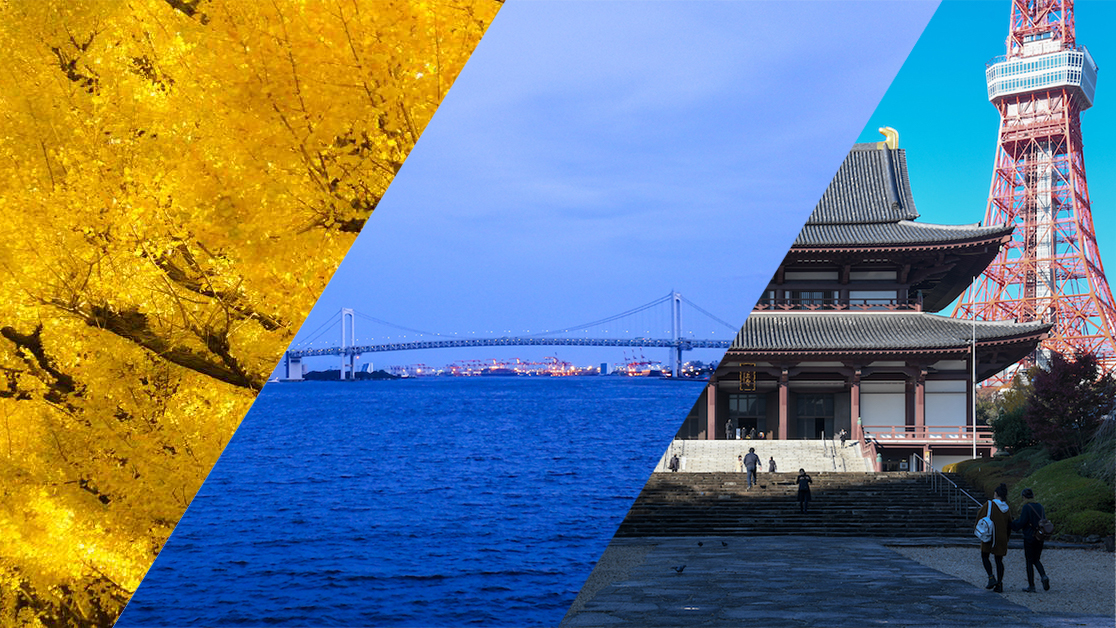 Nowadays, more and more people are making visits to the locations of TV dramas and anime, or the places where they were set, in what has come to be known as the “pilgrimage to sacred spots” boom. Minato Ward, which is home base for most of Tokyo’s TV stations, is not devoid of places that deserve to be called “sacred spots!” This being the case, my theme for today is famous location spots in Minato Ward. From totally classic locations that everyone knows about to the latest ones that everyone is talking about, there are many examples of “that famous scene” that was actually shot in Minato Ward.

When it comes to shooting locations in Minato Ward, the first place that comes to mind is, just as you would expect, Jingu Gaien Ginkgo Avenue. About 300 meters in length, this pleasant, straight avenue is lined with ginkgo trees on both sides and has car lanes running down the middle. It has been an indispensable spot for shooting trendy dramas since the 1990s.
Of these, the most famous are the timeless masterpieces 101st Marriage Proposal and In the Name of Love. Since the 2000s, the avenue has also been used as a location in HERO, Boys Over Flowers, and AIBOU: Tokyo Detective Duo. No matter how old you are, you are bound to know one of these series.

In front of the tree-lined street, there is a Shotoku Memorial art Gallery, which is popular as a picturesque tree-lined street. At the end of November, the leaves of the ginkgo are so golden that they delight people.

Tokyo Tower is another of Minato Ward’s famous shooting locations. In 2007, the movie Tokyo Tower ~ Okan to Boku to, tokidoki, Oton was produced based on the novel by the same name, and Tokyo Tower turned into a spot that symbolized these works.
The gallant figure of Tokyo Tower has appeared in numerous movies and dramas to create a scene representative of Tokyo. Among much-talked-about dramas from the past 10 years, Tokyo Tarareba Musume and Suki na Hito ga Iru Koto are two in which the tower’s main deck has been used for shooting.

Opened in 1958, this symbol of Tokyo, and of Japan itself, saw its 60th anniversary back in 2018. Located in Tokyo's Yamanote area, this 333m tall radio tower has both a main deck (150m high) and top deck (250m high) from which you can look out over Mt. Fuji, Mt. Tsukuba, and all of the Tokyo metropolis itself, making it a popular tourist spot not just among the Japanese, but with tourists from all around the world. The tower's 'Landmark Light' is widely acknowledged to have completely transformed Tokyo's nightscape, and together with the 'Diamond Veil' illuminations launched to mark the tower's 50th anniversary, they're able to paint all manner of pictures in Tokyo's night skyline. The tower's 'Foot Town' building is replete with services including cafes and souvenir shops, and also hosts a variety of events throughout the year, making the tower the perfect spot for a fun-filled day trip. The number of visitors to the tower's observation decks has surpassed the total population of Japan, breaking the 180 million people milestone in 2018. In June of 2013 the tower was officially recognized as tangible cultural property of Japan.

Rainbow Bridge is another of Minato Ward’s famous locations. The bridge opened in 1993 and has made a frequent appearance in dramas and movies as a spot that encourages a mental association with a new and fashionable Tokyo.
One of the most famous of these works is the movie Bayside Shakedown: The Movie 2; or, Close The Rainbow Bridge! set in what was then the fictional Wangan Police Station. As the title suggests, whether the bridge can be closed or not is the yes-no question that drives the movie’s storyline. The Rainbow Bridge can be crossed on foot, so you would expect that men over 30 are likely to want to declare “The bridge cannot be closed!” from the top of the bridge.

The largest bridge in Metropolitan Tokyo, the Rainbow Bridge connects the Shibaura area to the Tokyo Waterfront City, with a length of about 800 meters. The bridge is a symbol of Tokyo and gives a beautiful silhouette to Tokyo Bay. The upper portion is the Shuto Expressway, and the lower portion is a double structure with general roads, pedestrian promenades, and the New Transit Yurikamome Line. You can enjoy a view of Tokyo Tower and Odaiba from the 1.7 km (20-30 walk) pedestrian premenade.

The locations of famous scenes from the latest popular movies

"Next up, I’d like to cover some shooting locations that have appeared in important scenes in movies and dramas that have got lots of attention in recent years.

As a matter of fact, Minato Ward has appeared in more than 100 movies and dramas in the few years since 2015, and has a place that is becoming “a sacred spot within a sacred spot.” I am talking about Shinagawa Season Terrace, which is about a 6-minute walk from the Konan Exit of Shinagawa Station."
Shinagawa Season Terrace has been used as a location in a variety of movies and dramas, a particularly famous example being The Full-Time Wife Escapist, a TV drama that created a craze with it’s Koi Dance, performed at the end of every episode. The “hug-in-advance” scene, where the hero and heroine hug for the first time, was shot at the event plaza that adjoins Shinagawa Season Terrace.
There are also many places, both inside the building and outdoors, that were used as locations. The event plaza is a lawn plaza, which is rare, even in this part of town. The commercial area on the 2nd floor has a variety of restaurants and cafes, with a full range of gourmet dining.

Shinagawa Season Terrace is a success of applying 3D urban planning to a cooperative public and private large-scale development between the Tokyo Metropolis and four private companies: NTT Urban Development Corporation, Taisei Corporation, Hulic Co, and Tokyo City Development Co. The lower floors abound in a variety of shops and restaurants, as well as distributed conference halls, and adjoining the building is 3.5 hectares of open green space where the greenery and waterfront scenery changes from season to season. By creating a landscape of harmonious abundance while bringing all the advantages of a center for business to a place to foster community, it is contributing greatly to the regional community.

Minato Ward’s famous temples and shrines have also been used as locations. Hibiya Shrine in Higashi-Shimbashi appeared twice in the TV drama Stepmom and Daughter Blues as a shrine visited by the main characters.
This shrine in the middle of Tokyo’s office district is a setting that forms a perfect link with the story, whose main character is a career woman.
Hibiya Shrine
Location: 2-1-1 Higashi-Shimbashi, Minato Ward, Tokyo
Reception hours (shrine office): 9:00 a.m.–5:00 p.m.
The area around the canal in Shibaura, where waterways and skyscrapers create a unique landscape, has also been frequently selected as a location. The bridge over the canal is an especially popular spot.
Recently, Rakusuibashi Bridge was used as a location in the drama miu404. In addition, Hyakutaibashi Bridge appeared in Doctor-X: Surgeon Michiko Daimon, which aired two years ago, and Shinshiba Bridge made an appearance in An Incurable Case of Love. A green promenade runs along the Shinshiba Canal, which is crossed by Hyakutaibashi and Shinshiba bridges, so this is the perfect spot to take a walk.

The bridge was replaced in March 1968, completing the steel bridge that is 76m long and 4m wide. The bride is managed by the Tokyo University of Fisheries and was named after the university's alumni association, Rakusuikai.

A concrete bridge with a length of 28.3 m and 8m width was completed in 1962. The name of the bridge is a mind to prosper long.

The noted spot that was the scene of a Hollywood movie

In addition to local productions, Minato Ward also has a place that was used as a location for a Hollywood blockbuster. It is Zojoji Temple, which appeared in The Wolverine (2013), an installment in the X-Men film series. The temple appears in the scene where the hero, who visits someone’s funeral, is suddenly attacked by enemies.
In the middle of the fierce battle scene, you get a glimpse of Tokyo Tower in the background. As the film was a Hollywood blockbuster, it seems that this was a large-scale shoot with more than 400 people, including the cast and staff. If you make a visit to Zojoji Temple and get a feel for its size, I’m sure you’ll agree that this was the only temple that could serve as a location of this scale.

The Main Temple of Jodo Buddhism. On par with the Kan'ei-ji in Ueno and home to the mausoleum of the Tokugawa Shoguns, it is the resting place of 6 of the warlords, Princess Kazu (Lady Seikan'in-no-miya), and the mothers of the shoguns.

Today I’ve selected and written about some of Minato Ward’s top shooting locations that you can visit freely. Tokyo’s Minato Ward also has lots of other wonderful spots that are like scenes you’d see in a drama series. I hope you enjoy your pilgrimage to sacred spots, feeling as if you were the main character in a story.
Categories
Tweet

When you visit Takeshiba Pier or Odaiba and look out over the ocean, have you ever seen a yellow boat that stands out from the crowd? This cute boat is operated by Tokyo Water Taxi. In fact, you can charter this cute boat and order a private cruise with a driver. This time, we ordered a tour of the ...

There are many other recommended spots in addition to Jingu Gaien Ginkgo Namiki! A walk around the "hole-in-the-wall" places where you can enjoy the autumn leaves in Minato City!

The fall foliage season is in full swing from mid-November to early December in central Tokyo. In Minato City, too, the streets are decorated with autumn-colored trees throughout the ward. The most famous autumn foliage spot in Minato City is the "Jingu Gaien Ginkgo Namiki" in Kita-Aoyama, which is ...

Minato Ward is home to around 40 shrines and 280 temples, with some famous places including Zojoji and Nogi Shrine. Out of those, did you know that there are "annexes" that follow the famous head temple and "branch shrines" where the faraway gods of those shrines are enshrined in a faraway place? To...