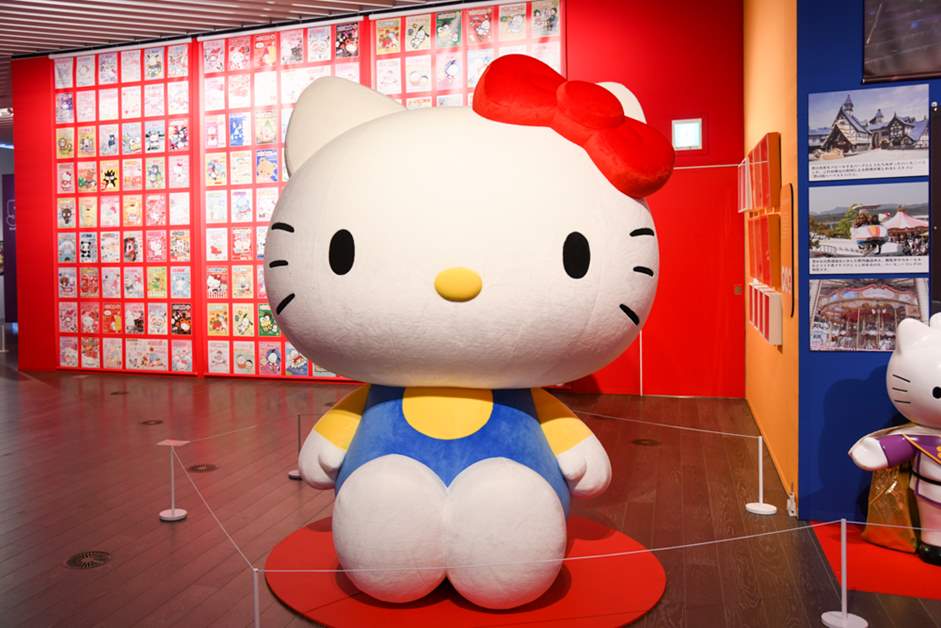 The "Sanrio Exhibition: Japan's 60 Year History of Kawaii Culture" opened on September 17th at the Tokyo City View on the 52nd floor of Roppongi Hills Mori Tower. This exhibition, which will be held until January 10th next year, will explore the 60-year history of Sanrio, known for its characters such as Hello Kitty and My Melody. The special exhibition will feature more than 800 items of artwork, products, and photographs. Here I will guide you through the must-sees of the exhibition during the pre-opening event!

Even Hello Kitty is amazed! The stunning "Sanrio Tower" welcomes you.

On the 52nd floor of Roppongi Hills, Mori Tower is where Tokyo City View is located. If you use the dedicated elevator from the 3rd floor of Mori Tower, you'll be up in the skies, 250 meters above sea level, in a matter of seconds. And the most exciting thing about Tokyo City View is the collaboration of art and the scenery of Tokyo from the observatory. As always, we have displays that won't let anybody down. Here's one.
The "Unforgettable Tower" made exclusively for this exhibition by Masuda Sebastian, a famous evangelist of Japan's kawaii culture, is a stunning work with more than 4000 Sanrio character plush toys glued onto a tower around 8 meters high.
The tower that seems to reach the ceiling of the observatory, backed by the panorama, is filled with Sanrio characters. Hello Kitty came here that day as a special guest and she seemed to be happy as well.

The history of Sanrio before the creation of Hello Kitty

Yamanashi Silk Center, which was founded in 1960, is one of Sanrio's predecessors. In August last year, Sanrio celebrated its 60th anniversary. Sanrio's history began in an era where leisure was still rare, and it is not an exaggeration to say that Sanrio is the history of Japan's Kawaii culture itself. This exhibition looks back at its history through 6 zones and 10 themes, and it's "100% Sanrio" from beginning to end.
In the first theme, "The Beginning of Kawaii", the history before the creation of original characters such as Hello Kitty and My Melody are introduced. The first displays show Sanrio's first hit, "Ichigo Series". Next, you'll see early Sanrio goods that are adopted works of popular illustrators of the time.
Illustrators include Ado Mizumori, nicknamed "Ado-chan", who was popular in an educational TV program, Rune Naito, known for fashionable girl's manga and the "Runepanda" design, who made an impact on Sanrio later on, and Takashi Yanase, the creator of Anpanman.
From the braided girl character "Patty & Jimmy" from the "Love is" series, Sanrio started its original character development that continues up until now. In 1979, Hello Kitty, and on the next year, "Little Twin Stars" better known as Kiki and Lala, and "My Melody" were born.

In the next "Sanrio Characters" zone, the cute Sanrio characters all unite. Famous characters such as Hello Kitty, KikiLala, My Melody, Goropikadon, Hangyodon, Pochacco, Cinnamoroll, and Pom Pom Purin are displayed. Also, characters that colored the 60-year history of Sanrio are displayed in panels.
In the main displays, not only are their profiles and characteristics listed but also their "inside stories" of how they were born are introduced. These stories were published on Sanrio's bulletin paper "Ichigo Shimbun" dating back from 1975. Also, there are displays of valuable early character goods and are full of content. There is not enough time to look at each and every display here.
On the other hand, on the panels are characters of Sanrio all lined up, more than 450 of them. They are categorized into concepts such as "Abroad-like characters" and "Funny characters". You can see that Sanrio kept creating new "Kawaii" that always incorporated the latest trends at the time. By the way, as a person in my thirties, I was amazed to be able to "reunite" with "Kero Kero Keroppi", "Pokopon Nikki", and "Monkichi the Monkey", which were popular and often designed on stationery when I was a child.
The theme of the third zone is "Social Communication", something Sanrio has continued cherishing. With a large Hello Kitty statue in the center, there is a wide variety of displays that show the "connection" of Sanrio and its fans. Displays include "Ichigo Shimbun", a reader-interactive community, memories of Sanrio shops in Shinjuku and Ginza, and an introduction of Sanrio Puroland, which opened in 1990.

Let's immerse ourselves in the world of Sanrio from beginning to end!

In the next zone, we dissect again how Hello Kitty became a loved character for many years. From the 70's where it was rare for adults to own character goods to modern days where Hello Kitty went through numerous collaborations with luxury brands, we trace back the Kawaii trend that Hello Kitty has created. You'll be amazed to see displays of Lady Gaga's "Kitty dress" and the first-ever Hello Kitty product, a petit purse. There should be something that "resonates" for fans of any era.
After that, there are displays of collaboration goods of Sanrio and up-and-coming modern artists, and we get to the finale, where Sanrio's hopes for the future can be seen. I had a great time immersing myself in the history of Sanrio right until the end where I took a photo with a statue of My Melody.
However, this is not the complete end of the world of "100% Sanrio". After going through the exhibition, there is a special store and THE SUN&MOON Café right next door. With more than 100 types of products and cute collaboration menus, it can be said that they are also part of the excitement. Of course, please enjoy the spectacular view of Minato ward from Tokyo City View before exiting!
"Sanrio Exhibition: Japan's 60 Year History of Kawaii Culture" is open until January 10th next year in Tokyo City View, the 52nd floor of Roppongi Hills Mori Tower. Moreover, with COVID-19 precautions under practice, entry is only allowed through reservation at Lawson, Ministop stores, or on the web.
"Sanrio Exhibition: Japan's 60 Year History of Kawaii Culture"