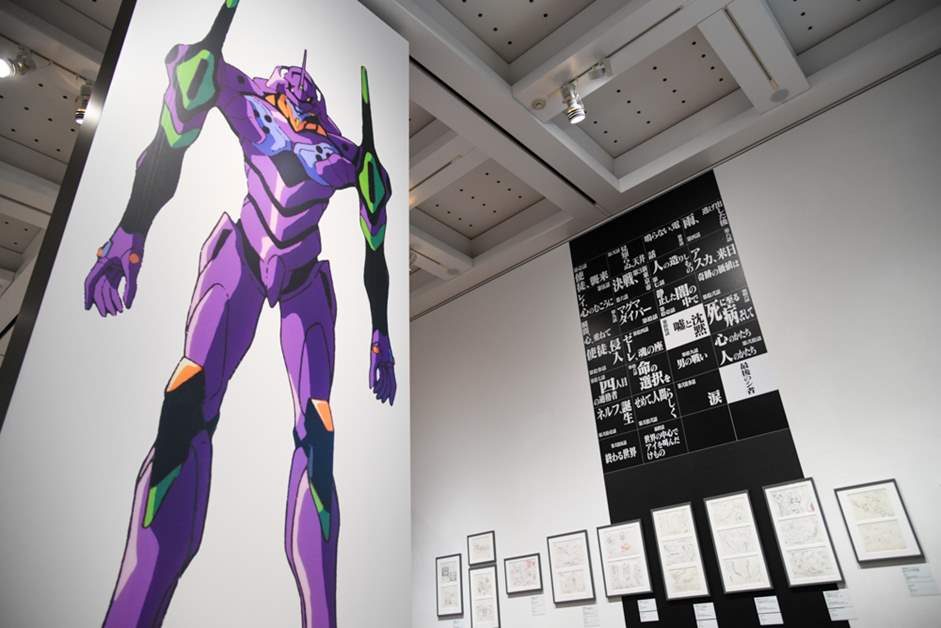 Hideaki Anno, the general director of the "Rebuild of Evangelion" series and "Shin Godzilla." The world-first exhibition that traces his path until now, the "Hideaki Anno Exhibition," opened on October 1st at The National Art Center at Roppongi, Minato Ward. Here I will introduce the must-sees of the exhibition and report on the preview event the day before the opening.

Everything started from one "sewing machine"

Hideaki Anno was born in 1960 in Yamaguchi prefecture.
He participated in the creation of the TV anime show that started in 1995, "Neon Genesis Evangelion," and created a frenzy until the "Rebuild" series was released in the 2000s. Also, he vigorously produced live-action films and directed the 2016 movie "Shin Godzilla".
Throughout the five chapters of the exhibition, in the "1st Chapter: Origin or Curse", documents and sculptures relating to anime and special effect works that young, robot-loving, mecha-loving Anno was all into, are displayed. The first display somehow is a sewing machine.
In fact, the foot-operating sewing machine that his parents had been using gave young Anno his passion for mechanisms. The precise movements of gears and belts of pedals gave a great interest to young Anno.
And inside the large space, many nostalgic items that nurtured young Anno's imaginations all come to one place. In the displays are masks of "Kamen Rider" and "Ultraman", and also sketches of "Gundam". On the 3m × 15m large LED screen, opening movies of old anime and special effect works that Anno loved are projected on an impressive scale.

Becoming a Creator, and into the World of Professionals

In the "2nd Chapter: Enthusiasm or Selfishness", you can see the paths Anno took from the start of his drawing career through his university days where he worked on independent productions until entering his professional career. First, you can see displays of 6 oil paintings that he drew during his art club days in Junior High School. The landscapes and still-lifes, reminiscent of the Impressionists, are quite skillful. We're able to feel the beginnings of his attention to detail that would later lead to his works.
From there, the independent works he created in groups during his university days are displayed. In one of them, called "DAICON FILM ver. Ultraman Returns", Anno himself acts as Ultraman. You can feel the strange fate of a man who created "Ultraman" as an amateur later went on to direct the movie "Shin Ultraman".
The exhibitions, including the later ones, also have finished films of each scene, so you can look at the differences between the creative process and the finalized work.
And finally, into a professional career. "Super Dimension Fortress Macross", "Nausicaa of the Valley of the Wind", "Nadia, The Secret of Blue Water", and many other famous works that color Anno's pre-Evangelion career are shown. Here, many sketches, cells, and documents that show the background of the works are displayed.
For example, in the "Nausicaa of the Valley of the Wind" display, 15 drafts of the original paintings of the Giant God Warriors that Anno drew, entrusted by Hayao Miyazaki, can be seen.
The scenario memos of "Nadia, The Secret of Blue Water", which Anno directed, show detailed settings that are written down in Anno's own handwriting.

Evangelion, Shin Godzilla, and to the Rebuild of Evangelion

The "3rd Chapter: Challenge or Run Away", where the huge NERV logo awaits, begins with displays of the TV anime show "Neon Genesis Evangelion".
First, there is an introduction to the process of creating the design of what could be the base of Unit 01 and Unit 00, and documents that set the main characters Shinji, Misato, Rei, and Asuka. There are also early correlation diagrams that Anno wrote in his own writing to explain the complex relationships.
Other than that, the exhibit is full of documents where you can see how detailed the world of Evangelion, the revolutionary robot anime, was created. Documents about Apostles that attack Earth, the Central Operations Command Center which comes up multiple times in the series, Misato's apartment where Shinji lives, and the mobile audio which is a key item of the story, are included.
After going through some exhibits of live-action films such as "Shin Godzilla", we go back to the world of Evangelion. The exhibits of the "Rebuild of Evangelion" series, which were released in the 2000s, and the last of the movies, "Shin Evangelion".
After taking a step into this zone, every single person will hold their breath. Because here, you can see the miniature set of the "3rd Village", which comes up in the movies. This is one of the materials created to design the movie screen. The detailed set that makes the scenes of the movies come to life is one of the highlights of the whole exhibition.
Here, the exhibit is full of many documents of things that appear in the movies. Please experience the real excitement and discovery that can't be felt only with words and photos throughout the whole exhibit.
In the "4th Chapter: Admiration and Regeneration", and "5th Chapter: Appreciation and Reward", displays of upcoming movies such as "Shin Kamen Rider" and "Shin Ultraman", and new creative works are shown. In the end, feel free to take a picture with three large statues of Kamen Rider, Godzilla, and Ultraman!
Hideaki Anno Exhibition
Venue: National Art Center, Special Exhibition Room 1E
Dates: October 1st (Fri) to December 19th (Sun)
Closed: Every Tuesday (Also closed on November 23rd)
Open: 10am ~ 6pm (Every Friday/Saturday until 8pm, last entry 30 minutes before closing time)
For more information, see also the exhibition homepage on the URL below.
https://www.annohideakiten.jp/
Categories
Tweet