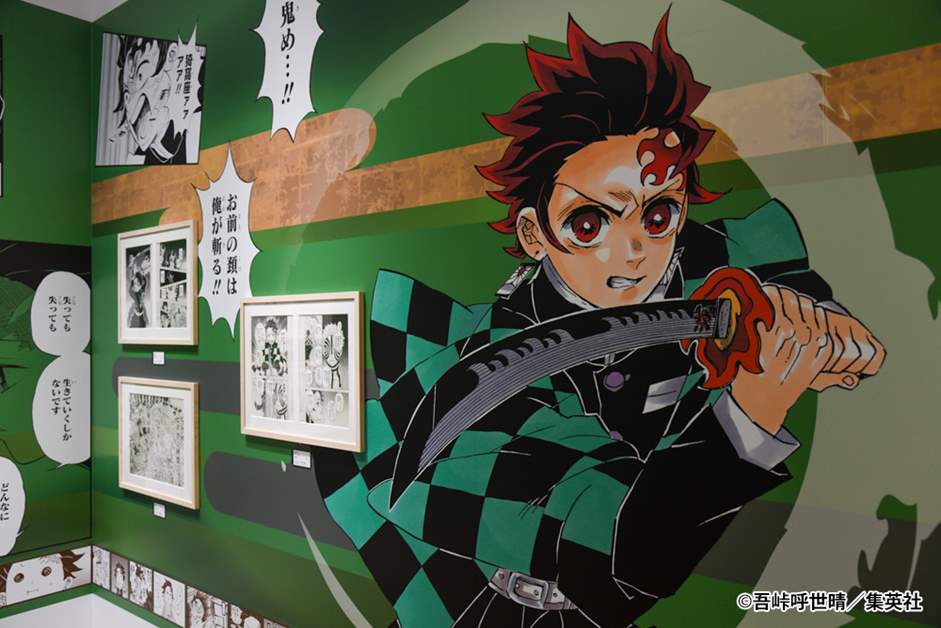 "Demon Slayer" is a manga that was published by Koyoharu Gotouge from February 2016 to May 2020 on Shukan Shonen Jump. The story is set in Taisho-era Japan. Centered around Tanjiro Kamado and his sister Nezuko, whose family was slain by man-eating demons, it depicts the drama of the fierce battle between the demons and the demon-hunting organization "Kisatsutai," which Tanjiro joins.
In "[Preface] Kirameki ~The Journey to Immortality~", where the exhibition introduces itself, the 23 manga book covers are shown on a largescale panel. In the center, you can see the "Volume 0 Figure" of the Kamado siblings.
The exhibition is divided into 9 chapters, including the preface, the 2 special chapters, and the prologue. Of the 5 main chapters, "Chapter One" shows Tanjiro and his friends, "Chapter Two" shows the head of demons Kibutsugi Muzan and the higher demons that follow him. "Chapter Three" shows the swordman of the "Hashira" who has the best strength of the Kisatsutai. "Chapter Four" shows the people who support Tanjiro, and "Chapter Five" depicts the last battle between the Kisatsutai and the demons.
Now I'll condense the best parts of the venue into three points and introduce them.

1. Amazed by more than 450 sketches where Gotouge drew with spirit!

The highlight of the exhibit is all the original sketches that the author Koyoharu Gotouge handwrote. More than 450 of them are shown.
"Chapter One: Bond ~Brother, Sister, and Friends~" starts with displays of the first chapter of the book "Cruelty", where the adventure begins. Here, famous scenes of Tanjiro, Nezuko, and Kisatsutai colleagues such as Zenitsu Agatsuma, Inosuke Hashibiru, can be seen.
From the opening scene of the memorable first chapter where Tanjiro monologues, "How did this happen?", there are many exciting scenes from the beginning. Scenes include his Hinokami Kagura swordplay and Water Breathing. You can see Zenitsu with his usual goofy appearance and cool "Thunderclap and flash", and Inosuke, who jumps into enemy territory.
The brightness of life can be felt from the flowing touches of the original copies by Gotouge. Looking at handwritten sketches by the author is a special experience. I'm sure you can feel the moment when Tanjiro and Nezuko had their life breathed in.

2. Overwhelmed by the spatial design full of "Kimetsu love" with famous scenes and lines!

The walls full of original copies in this exhibition are impressive. For example, in "[Chapter Two] Demon ~The End of Man, Endo of Sorrow~", a monolith decorated by original copies of high demons
Every monolith is shown with a comparison of the high demons' "demon appearance" and how they looked like "when they were humans". It is an exhibition where the deepness of the work can be felt, which cannot be described in terms of good or evil.
Also, the emotional words of the characters of "Demon Slayer" are another fascinating point. These words are depicted on the walls, and the inspiring story revived inside my heart.

3. The special move of Rengoku-san and the Infinite Castle is depicted as well! The 3-D figures pull you into the world of "Demon Slayer"!!

The third emotional point is the many 3-D figures that express the world of the work.
The 3-D figure of "[Chapter Three] Hashira ~Its Absolute Breathing~", where famous scenes of the nine swordsmen, "Hashira", left an impression. The nine have the best skills within Kisatsutai and include Giyu Tomioka, Shinobu Kochou, and Kyoujuro Rengoku.
Each swordsman of the Hashira has mastered a way. Here, 3-D depictions of sword skills are displayed. Tomioka's "Flowing Dance", Kocho's "Caprice", Tengen Uzui's "Constant Resounding Slashes", and Muichiro Tokito's "Moonlit Disappearance"… Surrounded by the Hashiras that dance on the wall with presence, the sound effects that fly around, and the sword skills that fly out, you will feel as if you have gone into the world of "Kimetsu".
In the next "[Chapter Four] Connect ~Everything at Stake~", you can see the "Great Lantern Dragon of Life", which supported Tanjiro and was created by the people who have lost their lives.

Secret emotional points that were not shown inside the manga…

Hideaki Anno, the general director of the "Rebuild of Evangelion" series and "Shin Godzilla." The world-first exhibition that traces his path until now, the "Hideaki Anno Exhibition," opened on October 1st at The National Art Center at Roppongi, Minato Ward. Here I will introduce the must-sees of th...