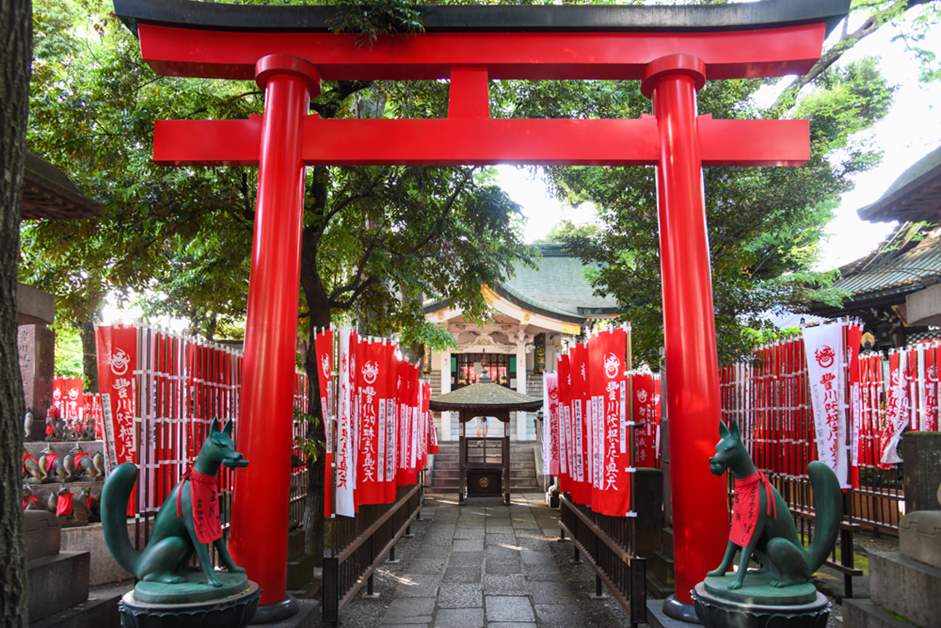 Minato Ward is home to around 40 shrines and 280 temples, with some famous places including Zojoji and Nogi Shrine. Out of those, did you know that there are "annexes" that follow the famous head temple and "branch shrines" where the faraway gods of those shrines are enshrined in a faraway place? Today, we will be going on a tour of four of those annexes and branch shrines.

Koyasan Tokyo Annex: The Temple of Kobo Daishi Where You Can Even Experience Pilgrimage

First, we visited the "Koyasan Tokyo Annex" in Takanawa. For those visiting from outside Tokyo, the nearest station is Takanawa Gateway Station of the JR Yamanote Line.
Koyasan is where Kobo Daishi Kukai started Shingonshu 1200 years ago. The whole mountain, which is located in Koyacho, Wakayama prefecture, is worshipped as the temple precincts of Kongobuji. It is one of the most famous temples in the country.

The annex in Tokyo was founded in 1956 as the office of the student monks (A place for learning for monks researching Buddhism). After that, it moved to its current place in 1673 and served its role as a connection between Kongobuji and the Edo Shogunate. It got its current name right after the beginning of the Showa Era.
At the front gate along Nihonenoki Street, there is the statue of the Great Kukai Shonin. After going through the Sanmon Gate which was refurbished last year, rows of stone columns with Buddha statues on them will catch your eye. This is "Shikoku Hachijuhakkasho Osunabumi," derived from the Ohenro pilgrimage of Shikoku, which is the birthplace of Kobo Daishi. Under the stone blocks in front of the stone columns are the sands of the 88 sacred grounds. It is said that if you pray as you step on the blocks, you can receive the same benefits as the pilgrimage.
On the right, there are the "Hyakudoishi," which is the standard of the Hyakudo Mairi, and the "Myoujinja," which was rebuilt in 2015 to commemorate 1200 years of the opening of Koyasan. Other than that, there is the "Houisokuteikiten," where there is the footprint of Buddha showing the direction of Buddhagaya, India, where Shaka had its Enlightenment. There are many places that resemble the Koyasan Temple, which is often called "The Buddhism Theme Park."
Inside the Henshoden, the main building, there is the wooden Kobo Daishi statue donated in 1703 by Keishouin, the mother of Tsunayoshi Tokugawa. Also, Aizomemyouou and Fudoumyouou statues, side chaplains, are enshrined as well.
Shakyo events are open every day from 9 AM to 3 PM. Also, twice a month, on Saturday at 10 AM, the "Ajikan Jisshuu Tea Ceremony" is held (currently not held because of COVID-19). The temple holds many other events, so go check out their official website for more information.

This is a branch temple of the Toyasan Shingon Sect main temple, Kongobu-ji. In the Keicho era, it was established as the workplace of the scholarly monks, Homon and Jumon of the Mount Koya. It was created as the "Koyasan Edo Zaibansho Koyaji". It negotiated general religious matters with the Tokugawa government and was used as a "furegashira" (a temple designated by the government) which notified the Old Shingon temples throughout the country of government communications. It played an important role, such as being the place where important officials from Mount Koya took turns visiting, a learning space for scholarly monks, and a place to practice Daishi worship.

The next temple, "Eiheiji Annex Hasedera," is a 15-minute walk from Izumo Taisha Tokyo Branch. It can be accessed from its nearest station, Omotesando Station in 10 minutes.
Eiheiji is the headquarters of Sotoshu, opened by Dogen Zenshi in 1244 in the Kamakura Era. The main temple in Fukui prefecture is known as a dojo where monks practice.

Before the Edo Period, the place where Hasedera was built was called "Shibuyagawara," and it is said that there was a small Kannon Hall that enshrined the Kannzeon Buddha Statue made with the same piece of wood as the Juichimen Kanzeon Buddha Statue in the Hasedera in Nara. With the Kannon Hall as its foundation, Hasedera was built by monk Monnanshoukan, a childhood friend of Ieyasu Tokugawa, after the opening of the Edo Shogunate.
The Eiheiji Office was founded in the mid-Taisho Era. Then, in 1949, it became the annex of Eiheiji. It held the role not only as a place of worship but as a practice dojo in Tokyo.
The temple was given 20000 tsubos of land at its founding, and it still retains its vast temple premises with a Dharma Hall, Monks' Hall, and Kannon Hall. There is also a garden where koi fish swim in the pond in the corner. It is filled with a quiet atmosphere where one wouldn't feel the hustle of the surrounding area.
The "Azabu Daikannnon" inside the Kannon Hall has been watching over the area with the enshrined Shakamuni-butsu. After it was built in Shotoku 6 (1716), the Juichimen Kanzeon Buddha Statue was burnt to the ground during World War II. It was then rebuilt in Showa 52 (1977). The 10-meter Buddha statue, which was sculpted from a piece of Camphor wood is one of the largest in Japan.
Every Monday night, a meditation session, "Monday Sanzenkai" is held (not held for COVID-19 prevention). You can sometimes see young monks practicing inside the temple premises. Looking at them practice makes us tighten up as well.

Its history is very old and begins early in the Edo period in the Tokyo Betsuin of the Nagaira Temple of Soto-Shu Daihonzan. Many famous people such as the doctor and the culture person in the late Edo period (the district designated historic site), the former Isao Inoue Kaoru of the Meiji era and the western painter Kuroda Kiyoteru, and the comedy King Enoken are sleeping here. In April, 1977, the Bodhisattva statue, the world's largest, was completed as a single carving, although the rodent Kannon statue, which was the same work of Hasedera in Yamato and Kamakura, was involved in the war.

To get to the fourth destination, "Toyokawa Inari Tokyo Annex," we ride the Minato Ward community bus "Chiibus" from "Minami Aoyama 7-chome" bus stop, close to Eiheiji Annex Hasedera. We ride on the bus that goes to Akasaka Mitsuke Station and hop off at "Toyokawa Inari-mae" bus stop.
You may imagine a shrine with foxes if you hear "Oinarisan," but the Toyokawa Inari, which is located in Aichi prefecture, is a Sotoshu temple named "Enpukuzan Myougonji." It opened in the Muromachi Period in the year Kakitsu gannen (1441) by Tokai Gieki Senshi. The Chinju of the temple, Toyokawa Dakinishinten, has the appearance of carrying rice and riding a white fox, therefore being named the Toyokawa Inari.
The Tokyo Annex has its roots in Oooka Echizennokami Tadasukekou, a famous administrator of Edo, inviting part of Toyokawa Inari to his residence in Akasaka Hitotsugi. It moved to its current location in Meiji 20 (1887), formally making it an annex of Toyokawa Inari. The nature-filled premises, while facing the lively Aoyama Street, has a quiet, calm atmosphere.
Toyokawa Inari is known for its benefits in a prosperous business. Also, the Yuuzuu Inari, known for benefits in treasures, the Kanae Inari, known to fend off bad relationships, and the Shiho Kannon, known for blessings of receiving children, are all there on the premises. Also, the seven gods are there in the area, such as the Ebisu-ten and Daikoku-ten. You can visit the Shichifukujin here.
Though the area can be seen in 10 minutes, there are many things to see. Many statues of foxes are placed all over the temple. There are many other photogenic spots such as the mountain path to the Okunoin lined with streamers dedicated by people whose wishes have been granted.
The tour is good to go around in a day, but you can divide it into a span of a few days, going one by one. It's difficult to go around Wakayama, Shimane, Fukui, and Aichi. Why not receive benefits from annexes and branches of these temples and shrines in Minato Ward?

This branch temple is a direct branch of the Enpukuzan Myoganji Temple (commonly called Toyokawa Inari) in the city of Toyokawa, Aichi. During the Edo period, the impressive Buddha statue worshipped by Ooka Tadasuke of Echizen was moved from the Ooka mansion on the Hitotsugi Street of Akasaka to the current location here in 1887.

Wanting to wish for true love? Or do you want to tell your feelings to someone you love? Choosing where to go pray or tell your feelings is important. So this time, we selected "love fulfillment spots" in Minato Ward, Tokyo from our perspective. Here are some great locations that are matchmaking pow...

[Minato City History Walk] Minato City, a meeting place between Takamori Saigo and Kaishu Katsu that led to the "bloodless surrender of the Edo Castle"

Takanawa Gateway Station was established last year as the first new station on the JR Yamanote Line in 49 years. The name of the station, "Gateway" (meaning entrance) was chosen with the aim of turning the area into a hub of international exchange, but it also has the meaning carrying the history of...