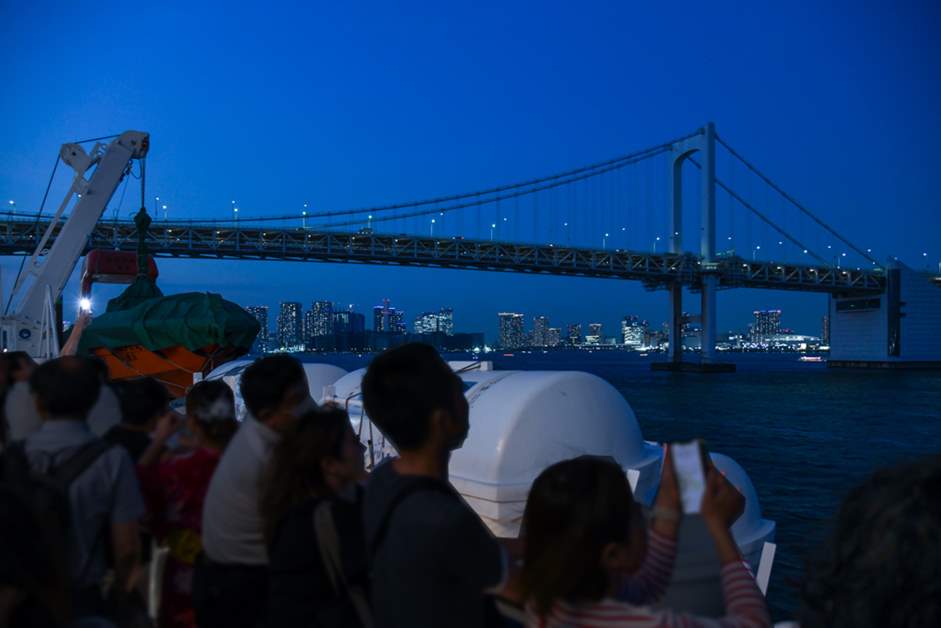 One summer tradition in Tokyo Bay is the "Tokyo Bay Noryosen" that departs from Takeshiba Wharf. The ship was canceled last year and the year before due to infection prevention measures, but this year, it is scheduled to be held in three years. Furthermore, the ship was renewed to "Sarubiamaru III" this year. We went aboard the ship on its first day of operation, July 1st, and found what attracts people to the Tokyo Bay Noryosen!

People Waring Yukatas Get a "500 yen OFF" Discount!

The 2022 "Tokyo Bay Noryosen" is held from July 1st (Fri) to September 11 (Mon / Holiday). The ship departs from Takeshiba Cruise Ship Terminal, the same place as where the Tokai Kisen ships that go to the Izu Islands depart. The Takeshiba Cruise Ship Terminal, with a statue of a mast, is connected to Takeshiba Station, four minutes on the Yurikamome Line from Shimbashi Station. The terminal is also accessible from JR Hamamatsucho Station and Tokyo Metro Daimon Station by foot. The departure time of the summer pleasure boat is 7:15 PM. It will cruise for 1 hour and 45 minutes and will return at 9 PM.
The fees are 1500 yen per adult and 500 yen per child. Adults who are wearing yukatas receive a 500 yen discount except for Fridays, Saturdays, and Holidays. Also, reservations can be made online via the official website 1 month before the departure date. Also, there are plans where boat tickets with designated seats, food, and drinks are also served (4000- yen per adult, 3500- yen per child). We recommend you choose this plan if you wish to sit down and relax inside the boat.
Also, if you want to wear a yukata but cannot because of reasons such as coming directly from your workplace, the official "Yukata Shop" built inside the terminal is convenient. For women, there is a plan where the boat ticket, yukata rental, and dressing are included in 5800 yen (5300 yen until July 28).

The Scenery of Tokyo Bay Dyed with the Color of Sunset

"Sarubiamaru III" operating from 2020 summer as an Izu Islands route ship will be used as the Noryosen this year. The large-scale cruise ship with a length of 118m is white-colored with blue-colored waves. It gives out a unique presence within the ships berthing in the Takeshiba Wharf. For those with boat tickets, the top deck floor (6th floor) and part of the 5th floor are the main riding spaces. Also, there is a free space for you to take a break on the 3rd floor.
If you arrive at Takeshiba Cruiseship Terminal a little early, there are many people in yukatas in the waiting room. We are allowed to embark on the ship 25 minutes before departure at 6:50 PM. It is around the time of sunset, and you can see water buses from the Sumida River direction and Yagatabune that are about to depart. Also, the lighted-up Tokyo Tower can be seen in the other direction.
The faces of the crews look bright as they busily start to get ready for departure. And with the announcement, "We will depart!" the ship starts its journey from Takeshiba Cruiseship Terminal!

We got on the ship in early July, so the sky was still a little bright, with the buildings starting to light up in Harumi and Odaiba creating a beautiful contrast with Tokyo Bay. As it was the first day of the cruise, celebratory fireworks went up. Also, the yellow Hashimaru ship that came from Hachijo Island goes past us, as if the sister ship is celebrating our departure. After going through the Rainbow Bridge, gasps of wonder rose from around us.
On the left is Odaiba, and on the right is Oi Container Wharf and Haneda Airport. We also can take a look at the Tokyo Gate Bridge, and go back the same route. The scenery during the day is beautiful, but the night view is also wonderful with a romantic mood. As we go offshore, we feel the sea breeze, creating an atmosphere that can only be made by a Noryosen. The DJ talking about the sightseeing spots of the surrounding area and the 11 islands of Tokyo increases the fun and excitement.
On the other hand, the view is not the only fascinating thing about the Noryosen. The gourmet sold inside the ship is also something not to miss out on. On the 6th floor, we can get a variety of food such as Tokyo gourmet and snacks for beer. These include "Ashitaba Tempura" (600 yen) and "Island Suchi" (900 yen). On the 5th floor, sweets such as gelato and apple candy are sold. You can enjoy all-you-can-drink soft drinks at 300 yen, a very reasonable price. Time spent talking with close friends while eating delicious food would surely become a special memory. By the way, I got "Island Nori Yakisoba" (600 yen), which uses Island Nori from Hachijo Island. Eating the nori-flavored yakisoba in the ocean breeze made me feel as if I were on a slow-life tropical island.
Some take selfies of themselves in yukatas, some are enjoying the view, saying "Oh! There's the Skytree!" and some are acknowledging each others' hard work with a drink in hand…as many conversations light up around us, the ship approaches the Tokyo Gate Bridge, where it will turn back.

A music live show starts on the stage where the DJ booth is located. Singer-songwriter Fujii Megumi, who sings 'Islands Blue,' the image song of "Sarubiamaru III," sings a few songs. Also, the Tokyo Islands Hula Team performs to celebrate the opening of the Noryosen. A special collaboration was performed. The gentle voice of Fujii-san and the hula dance on the stage created a united atmosphere as if we were at a summer festival.
As the Tokyo Tower comes closer, the fun times are almost over. As we look back from where we came, the night view of Rainbow Bridge gives out a different look from what we saw before. As we get off the ship after a 1 hour and 45-minute ride, I thought that I'd like to visit the islands of Tokyo next time I ride this ship.
Here, you can enjoy and experience the night view of Tokyo Bay at only 1500 yen! Why not visit Takeshiba Wharf to enjoy night cruising in this yukata season?
(DATA)
Tokyo Bay Noryosen
Operating Dates: July 1st, 2022 (Fri) to September 11th (Sun)
Fare: 1500 yen per adult, 500 yen per child in elementary school and under
<Yukata Discount>
Adults riding the ship wearing a yukata receive a 500 yen discount, making the fare 1000 yen.
* Tickets and Taxes included in the fare. Drinks and food are not included.
* Yukata discount does not apply on Fridays, Saturdays, and Holidays. Only applicable to adults. Cannot be used with any other discounts. Jimbeis and Samues are not applicable.

The Deep History of Optics at the Nikon Museum, Presented by a Nikon Fan of 15 Years!

Nikon is a world-famous camera manufacturer headquartered in Japan. You can learn about Nikon’s 100+ years of history and the various products they’ve made at the Nikon Museum located in Minato, Tokyo. The writer of this article has been a user of Nikon cameras for 15 years, and will guide you on a ...

Recommended rainy day sightseeing spots in Tokyo's Minato Ward, which you can reach from the station almost without getting wet.

The rainy season will soon be upon us again this year. On a wet day in the rainy season, there are few places you can visit comfortably. Here we will feature some recommended sightseeing spots that you can reach from the nearest station without getting wet, even when it's raining. There are some spo...