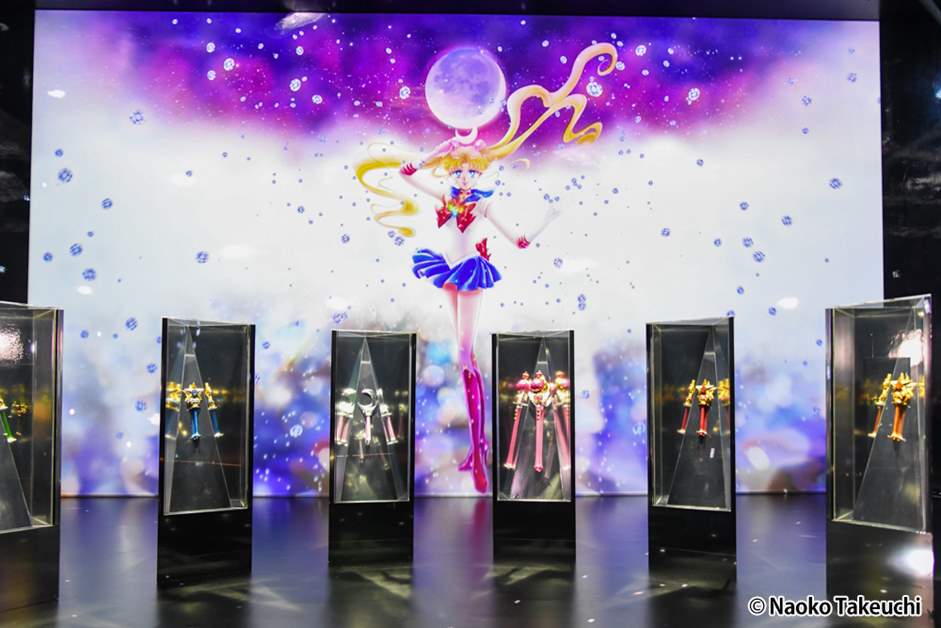 The "Sailor Moon Museum," celebrating the 30th anniversary of the serial publication of "Sailor Moon," a milestone in girls' manga, opened on July 1st at the Roppongi Museum in Roppongi, Minato Ward, and will be held for three periods until December 30th.

The manga "Sailor Moon" was serialized in Kodansha's monthly magazine "Nakayoshi" from 1991 to 1997. The novel storyline of girls transforming into heroes attracted a lot of attention at the time, and the series was adapted into anime in 1992. Not only did it become a social phenomenon, but the activities of the Sailor Warriors gave courage to many children.
Did you know that this work has a strong connection with Minato Ward? The town where the main character Usagi Tsukino and her friends live was modeled after Azabu Juban, which is located near the venue. Many places modeled after Azabu Juban appears in the work, including the Azabu Juban shopping street and the Azabu Hikawa Shrine.
The exterior of the Roppongi Museum features a cool illustration of all 10 Sailor Warriors. A huge illustration of Sailor Moon can also be seen in the waiting area where visitors wait to enter the museum. In fact, the original author, Naoko Takeuchi, wrote this illustration for this exhibition. Her attention to detail is hidden not only here, but in the exhibition space as well.

The music and immersive visuals of "Miracle Romance♪" have already got me excited!

The entrance to the museum is... a "door of time and space" that probably needs no explanation to fans. Even if you have been a fan of Sailor Moon for 30 years, going through this door will take you back to your childhood when you first met Sailor Moon!
Beyond the door is an immersive theater. Here you will watch an introductory video, but before that... your eyes are glued to the six display cases in the center of the space. To my surprise, there on display were the sticks used by the Sailor Warriors for transformation and purification. The cute and cool sticks were impressive from the very beginning, as they were realistic reproductions of the shapes we admired in the manga and anime.
Then, "Moonlight Legend," which was the first opening song of the anime, began to play with a familiar melody, and the images of the Sailor Senshi were projected on the screen. Sailor Moon's Moon Tiara Action, Sailor Mercury's Shabon Spray, Sailor Mars' Fire Soul, and other special moves unleashed on the big screen have already got me excited!
Next up is "Sailor Guardians History," a space with glittering and dazzling holographic walls depicting famous scenes from Sailor Moon Part 1 to Part 5. The first panel is, of course, the scene of Usagi waking up late with the classic opening line from the anime, "I am Usagi Tsukino, 14 years old, eighth grade."
On the other hand, the handsome face of "Mamo-chan," a.k.a. Tuxedo Mask, is right next to her. A mirror ball overhead emits particles of light, themed to each of the warriors, transforming the space into an even more luminous atmosphere. If you love Sailor Moon but have forgotten some of its stories, this is the place to go for a quick review.

In the following room, more than 600 related goods on Sailor Moon, which has expanded beyond manga to anime, merchandise, musicals, and other multimedia, are displayed in several areas. The first area is devoted to setting materials from TV anime and other visual works.
The exhibition is full of important and interesting characters including the first Sailor Warriors and setting materials for the stage. Among them, in the "Sailor Moon S" corner, where Sailor Uranus and Sailor Neptune make their first appearance, visitors can see storyboards drawn by Hideaki Anno, director of "Neon Genesis Evangelion," who was involved in the production of this work at the time.
In the next area, there is a large collection of Sailor Moon transformation compacts and other related goods that fans of the work during its boom period must have owned one. In the center of the room, a wedding dress made in collaboration with Sailor Moon is also on display. The costumes used in the musical version of the series are also on display, allowing visitors to take a closer look at the 30-year history of the series.

Original color drawings by Mr.Takeuchi, restored to their original brilliance by himself

While there is plenty to see and do at this point, the highlight of the exhibition begins here. At the entrance is a collection of covers and door illustrations from the time the magazine was serialized in "Nakayoshi".
Those who know the serialization of the magazine will surely feel nostalgia for the many illustrations. Copies such as "The super hit Sailor Suit action flying around the world" and "The Sailor Warriors spreading their wings fly more beautifully and more splendidly!" and other such phrases, which, as Fumio Osano, the editor who actually wrote the copy, humbly states, "are lame" when read today. These dusty, old-fashioned words are one thing to see.
The next space is the "Sailor Crystal Gallery," which displays original color drawings handwritten by Mr.Takeuchi. Here, a total of 180 works, including 60 works exhibited for the first time in each period, will be displayed, changing exhibits from the first period (Vol. 1) to the third period (Vol. 3). A number of original paintings of the artist's best work are displayed. Some of the original watercolor drawings from the time of the serialization had faded over time, but for the exhibition, Mr.Takeuchi himself has reworked them to bring back their original brilliance. This is another example of Mr.Takeuchi's passion for this exhibition.
This is also a valuable original picture that Ms. Osano says, "I think this will be the first and last exhibition of its kind." It will be a great opportunity for fans to be able to see up close the original color drawings depicting the love and friendship of the Sailor Warriors, or off-screen shots of them at rest.
In addition to viewing the original works, visitors can also enjoy a collaboration café where they can taste gourmet foods that depict the world of Sailor Moon, such as the "Oshioki on the Moon Omurice" (1,650 yen) and the "Meizerifu Art Latte" (770 yen), and a museum store full of original goods from the exhibition. Enjoy yourself to the fullest and take your memories home with you!
The Sailor Moon Museum attracts people of all ages, from adults who once dreamed of Sailor Moon to today's children who have become new fans. The museum offers a variety of exhibits from the first to the third seasons, so we recommend visiting not just once, but twice or even three times. And on your way home, be sure to stop by Azabu Juban, the model for the Sailor Moon stage, and reflect on the town where Usagi and her friends live.
(DATA)
"Sailor Moon Museum"
Dates: July 1 (Fri.) - December 30 (Fri.), 2022
Vol. 1: July 1 (Fri.) - September 4 (Sun.), 2022 *Original drawings mainly from Parts 1 and 2 of the original story will be exhibited.
Vol. 2: September 10 (Sat) - November 6 (Sun), 2022 *Original drawings mainly from Parts 3 and 4 of the original work will be exhibited.
Vol. 3 November 12 (Sat) - December 30 (Fri), 2022 *Original drawings from Part 5 onward of the original work will be exhibited.
Place: Roppongi Museum (5-6-20 Roppongi, Minato-ku, Tokyo)
Closed: September 5 (Mon.) - 9 (Fri.), November 7 (Mon.) - 11 (Fri.)
Hours: 10AM - 6PM (last admission 5:30PM)
Prices:
Advance sale
Adults 2,000 yen, Junior high and high school students 1,200 yen, Elementary school students 600 yen
At the door
Adults 2,200 yen, Junior high and high school students 1,400 yen, Elementary school students 800 yen
Ticket sales date: <Vol. 1> May 4, 2022 from 10AM
Date and time to be determined. Advance tickets are available on e-plus. Same-day tickets will be sold at e-plus or the museum counter only if there is room for more people to stay in the museum.
Ticket sales details will be announced on the official website.

Hideaki Anno, the general director of the "Rebuild of Evangelion" series and "Shin Godzilla." The world-first exhibition that traces his path until now, the "Hideaki Anno Exhibition," opened on October 1st at The National Art Center at Roppongi, Minato Ward. Here I will introduce the must-sees of th...