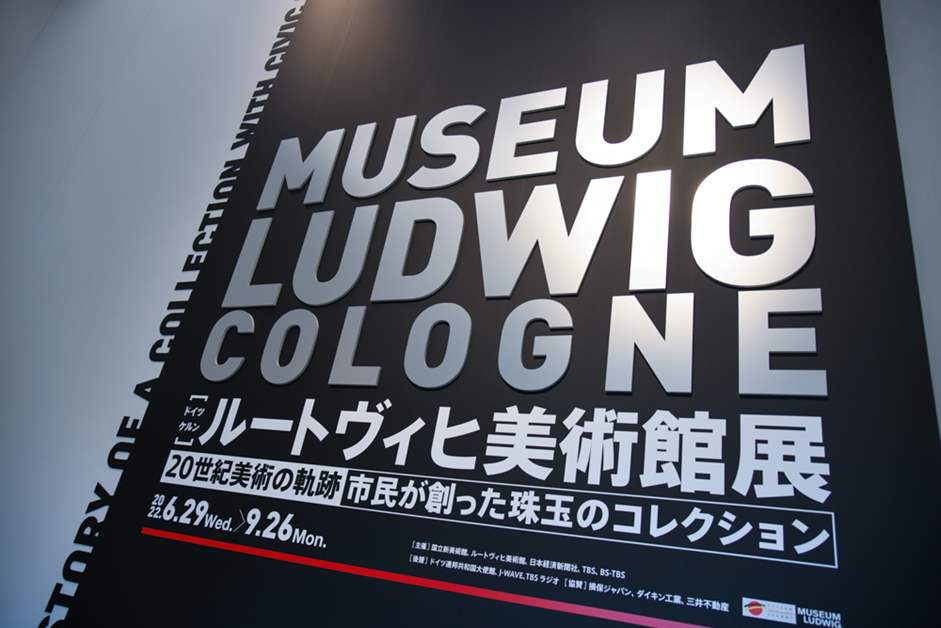 The "Ludwig Museum Exhibition: Trajectories of 20th Century Art - A Pearl Collection Created by Citizens" featuring 150 works of art from the Ludwig Museum in Cologne, Germany, opened on June 29 at the National Art Center, Tokyo in Roppongi, Minato-ku, and will run through September 26. The exhibition features works by Picasso, Chagall, Warhol, Lichtenstein, and many other masters of the 20th century and beyond. The first half of the exhibition is designed to allow visitors to appreciate the masterpieces of German Expressionism and Russian Avant-garde that took place in the early 20th century, while the second half is designed to provide an understanding of the trends from Surrealism and Pop Art to contemporary avant-garde art through numerous works. Here we introduce the highlights of the exhibition in five easy-to-understand points, along with a glimpse of the actual exhibition venue.

The Ludwig Museum, which houses the works in this exhibition, is located in Cologne, a city in western Germany. It opened in 1986. The collection of modern art from 1900 onward was transferred from the Walraf-Richartz Museum, which housed art from the Middle Ages onward in the same city, and art works of the same period donated by citizen collectors were gathered there to create an art museum focusing on art from the 20th century onward.
Among the citizen collectors, Josef Hauprich and Peter Ludwig, whose portraits are displayed in the prologue at the beginning of this article, made particularly significant contributions. Josef Hauprich, a lawyer, donated much of the art he had collected since the 1920s to the city of Cologne in 1946. Before the war, many modern German art works were persecuted by the Nazis as "degenerate art" (stupid and immoral art), and he had a desire to restore the value of such works.

On the other hand, Peter Ludwig, for whom the museum is named, and his wife Irene were prominent collectors of modern art. The Ludwig Museum became one of the most well-known in Europe for its collection of Picasso and Pop Art works, which the couple donated to the museum. In addition to the Pyle family, modern and contemporary works were donated by citizen collectors, including the Pyle family's collection of modern art. This exhibition also sheds light on these citizen collectors.

The first part of the exhibition focuses on the avant-garde art movements that took place at roughly the same time in modern Eastern and Western Europe. Chapter 1, "German Modernism - In Search of New Artistic Expression," collects works of German Expressionism and New Immediacy (Neue Zahlichkeit), which occurred from the end of the 19th century to the first half of the 20th century, with a focus on Hauprich's donated works.
While Impressionism, which arose in the latter half of the 19th century, depicted the external appearance of visible things, German Expressionism focused on expressing internal things such as emotions and spirit. The painters of the "Brücke" and "Blue Knights," two artistic groups whose works have been included in this exhibition, played a central role in this movement.
On the other hand, under Nazi rule, modern art in Germany was sometimes persecuted as decadent art. Portrait of Dr. Eduard Preitsch," a work of Neo-Impressionism, which was born after German Expressionism and was tinged with social criticism, is another work that was once confiscated by the Nazis.
The next section, "Russian Avant-Garde - Revolutionary Innovations in Art," features works in the painting styles of "Rayonisme" and "Suprematism," which occurred in Russia at about the same time as German Expressionism. This exhibition focuses on the collection of Mr. and Mrs. Ludwig, who advocated "world art" and also collected Russian art, which was under a different political system from that of the West.

➂ Masterpieces from the Picasso Collection, the world's third largest collection of Picasso's works, will come to Japan

The Ludwigs were known as one of the world's leading Picasso collectors. Chapter 3, "Picasso and His Surroundings - Liberation of Color and Form," features eight Picasso works from the couple's collection that came to Japan, along with works by masters who were active during Picasso's time, including Georges Braque, Modigliani, and Matisse.
The "Glass and Cup," created at the stage of establishing cubism, the "Woman with Artichokes," created at about the same time as his masterpiece "Guernica," also with an anti-war sentiment, and the "Sleeping Woman" and "In the Studio," which show the maturity of Picasso's later years, are all must-see works that trace each period of his life.

④ The currents of contemporary art that have continued from the postwar period to the present can be understood.

The latter part of the exhibition, Chapters 4 through 7, presents a chronological flow of artworks from Surrealism, Pop Art, and the subsequent avant-garde and abstract art. Pop Art was one of the Ludwigs' favorite genres, and visitors can see works by masters whose names are well known even to non-art fans, such as Jasper Johns' "0-9," Warhol's "White Brillo Box," and Lichtenstein's "Tkacha, Tkacha. The exhibition will feature works by many masters whose names are well-known even to art fans.
Most of the other works were collected by citizen collectors, and through these valuable works, visitors will be able to experience a retrospective of contemporary art from the postwar period to the present.

⑤ Look out for one of the world's greatest collections of photographs!

Another important aspect of the Ludwig Museum's photography collection, which was purchased and donated by Mr. and Mrs. Gruber beginning in 1977, is the overwhelming quality and quantity of the photographs on display throughout the exhibition. The Ludwig Museum's collection is also an important aspect of the museum.
In addition to photographs of prewar Germany, the works depicting Soviet Russia in the past and vivid photos of women living in New York City in the 1970s convey their respective eras.
These are the highlights of the "Kunstmuseum Ludwig" exhibition. The exhibition, which covers a wide range of genres, is deeper the more you dig, and we highly recommend that you take the time to view it there. The summer heat wave is already upon us. Enjoying art indoors is a perfect way to take in the sights while staying cool. We hope you will visit the National Art Center, Tokyo to enjoy 100 years of modern and contemporary art.

[Video Article] Experiencing "Madame Tussaud's" at Odaiba! Into an Area of Dreams Where Lifesize Figures of Superstars Such as Michael Jackson, Masaki Suda, and Yuzuru Hanyu Come Together!

Maybe some of you might have thought looking at this picture above, "Is this the real Masaki Suda!" Actually, this is a lifesize figure displayed at "Madame Tussaud's Tokyo" inside DECKS Tokyo Beach in Odaiba. Of the 25 permanent facilities, the Odaiba facility is the only one in Japan. The facility...

One summer tradition in Tokyo Bay is the "Tokyo Bay Noryosen" that departs from Takeshiba Wharf. The ship was canceled last year and the year before due to infection prevention measures, but this year, it is scheduled to be held in three years. Furthermore, the ship was renewed to "Sarubiamaru III" ...

Minato Ward, Tokyo is home to many unique exhibition facilities. Of those facilities, some have museum shops built next to them, where you can find original items suitable for souvenirs. Here, we will be introducing goods from museum shops. In this second article of the series, we will be showing go...