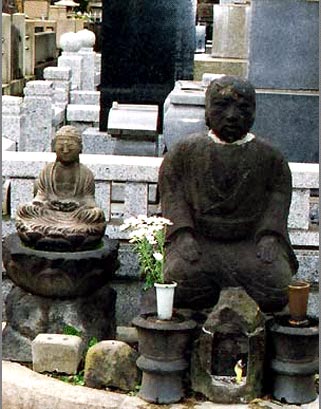 In the 8th year of the Bunmei era, this temple was founded by Dokan Ota, and was then moved to its present location in the 5th year of the Keicho era. The cemetery is on high ground that leads to Mount Atago. At the entrance, built in the shape of a person, is the grave of the Pike Bearer. The Pike Bearer (whose real name was Ashida Yoshikatsu) is a footsoldier from the Mimasaka Tsuyama Domain (present day Okayama Prefecture), who served Nobutomi Matsudaira, the head of the Matsudaira clan and director of Echigo. At that time, Echigo footsoldiers carried very long, heavy pikes. They were easily capable of decapitating when brought down, making them fearsome things. So that he wouldn't cause any hardship to others, the Pike Bearer, in his unwavering chivalrous spirit, cut the base of his pike handle, causing it to disembowel him. It's said that this took place in September of the 14th year of the Genroku era. The Matsudaira family, fearing the pike being cut again, was said to have reinforced the base of the pike with iron. The Pike Bearer's grave is also called the Yakko Jizo (yakko meaning servant, and Jizo referring to a bodhisattva who looks after the souls of children, often seen as statues in cemeteries.) Praying to it is said to be effective in treating sexually transmitted infections and gynecological disorders, and those who have made full recoveries may leave containers made of cut bamboo with alcohol in it as a show of gratitude. On these spacious grounds, there are a number of other sites designated as historical remains by the city. They include the grave of Kinga Inoue, a Confucianist from the Edo period, a Hourindai Kannon statue, a bamboo grove, and a freshwater spring.