Site of Yoshio Oishi and 16 Others' Unswerving Loyalty 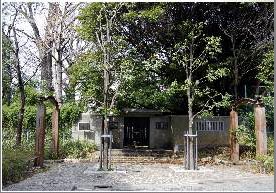 This is the site of the villa of the Kumamoto Domain's Hosokawa Etchu no Kami, where 17 Ronin, including Yoshio Oishikura, were held after the attack. During the Meiji era and the Taisho era, it became the Takanawa Imperial Residence and the Tomiya Imperial Residence for periods of time. A part of the garden, which is said to be a place where seppuku was committed, is surrounded by a wall and is preserved; although it is not open to the public, it can be glimpsed through a gap in the door.