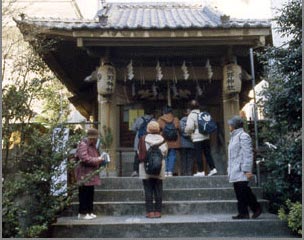 It is said that the Genroku of Kumano Shrine is not understood by the fire of 16 years and the old record has been burnt down. In the past few years, new benefits have been added to this shrine, and a soccer amulet will be awarded. According to the shrine, the gods of the Kumano Shrine, eight company chops, which has three legs, is a symbol of the J. League, so the number of people who worship has increased, rather than the player himself, there are many families and supporters. "Soccer Amulet" approved by the Football Association is white and blue. It shows the presence with the clay of the Ebisu-sama.

One of the seven Lucky gods of Minato-ku, Ebisu-sama is enshrined. Ebisu-sama has a fishing rod on his right hand and a sea bream on his left hand. Originally, it was the god of the fisherman, and it has been believed as a god which brings the safe sailing and the voyage safety. When commerce became popular, it came to gather the faith as the god of the business. This neighborhood was a very good stroll road, and it was one of Fujimura's favorite places according to "Ikura near" which I wrote when Shimazaki Fujimura lived in Ikura.