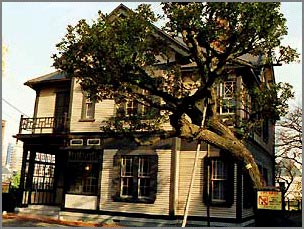 Founded in October, Meiji 19. Dr. Hebon, who became the first president, was the inventor of the Roman alphabet. At a cram school in Yokohama, I was teaching English to students, such as Masjiro Omura and Kiyoshi Takahashi. Dr. wrote the first Japanese-English dictionary Japan, but the copyright transfer fee was about 10,000 yen, and the Hebon Pavilion that the tower which hit the fifth floor in the center of the wooden four stories building was erected. The Hebon Museum was burnt down on September 21, Meiji 44, but the same day, Dr. Hebon, who lived in the United States, died. The tree of the memorial tree Kusunoki, which was planted in Meiji 24 by Shimazaki Fujimura and was carved with the initials in the boyhood, was cut down because it withered in 1968, and the San Dam Pavilion that Shimazaki Fujimura learnt was lost, too, but the Inbury Pavilion (National Important Cultural Property), Memorial Hall (GU) , the Warlis design Chapel (GU), the school song of the Showa 12-Ken Shimazaki-Fujimura, and the monument of his autograph in existence.