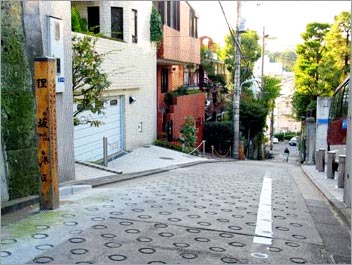 It is said that the raccoon of a person is infested. The reason for Asahi-Zaka is that it rises to the east. It divided into four slopes of one solitary pine of the Azabu Seven wonders, and there was "big Kurosaka" that there was one daikokuten of "tanuki slope" and seven lucky gods that the raccoon had gone out, and the tree was dark even in daytime lush "The Darkness slope", and "solitary Matsusaka" named after the Pine Go up to the Hikawa shrine in front of the seven Lucky gods Bishamonten.