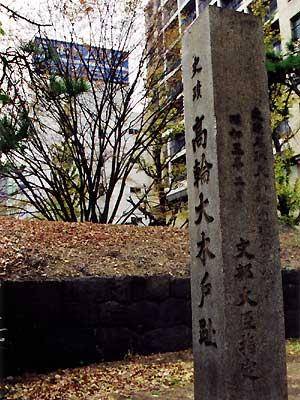 During the Edo period, a wooden gate was erected at each town, where guards would stand watch at a guardhouse. As the entrance to Edo city, Takanawa was called "Okido" (large wooden gate); it was a place of greetings and farewells, where travelers would arrange their traveling garb before setting off. A stone wall remains along the Daiichi Keihin track side. In order to create an accurate map of Japan, Tadataka Ino used Takanawa Okido as the starting point for his measurements. For 17 years he walked all across Japan, pushing the measuring cart he had devised himself. April 19th of year 12 of the Kansho era (1800) at the age of 55. Three years after Ino's death at the age of 74, his apprentices completed the map and presented it to the shogunate. Philipp franz von Siebold was discovered trying carry the map out of Japan and was deported as a result.