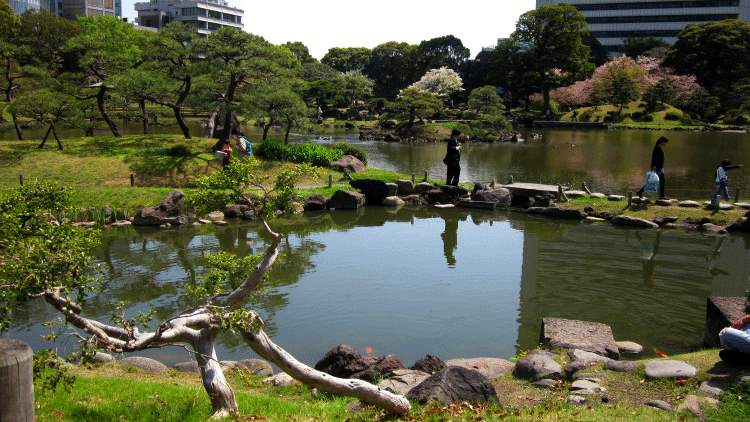 The Kyu-Shiba Rikyu Garden is one of the oldest gardens owned by a feudal lord, estimated to have been built between 1678 and 1686. It is a circular pond typical of the early Edo period, with a well designated garden in the heart of the pond and exquisitely arranged ring of boulders around it, designated as one of the 'National Places of Scenic Beauty'. This was place originally part of the sea, but was later reclaimed and served as the residence of Elder Ōkubo Tadatomo. Tadamoto had a garden built at the same time as the main mansion and named it "Rakujuen". Several owners later, it became the Shiba mansion of the Kishu Tokugawa family at the end of the Edo period. It was acquired by the Arisugawanomiya family in 1871, subsequently purchased by the Department of the Imperial Household in 1875, and became the Shiba-Rikyu the following year. It was damaged during the Great Kanto Earthquake, but was restored in the following year by the city of Tokyo to commemorate the marriage of the Crown Prince (Emperor Showa). It has been open to the public since 1924.