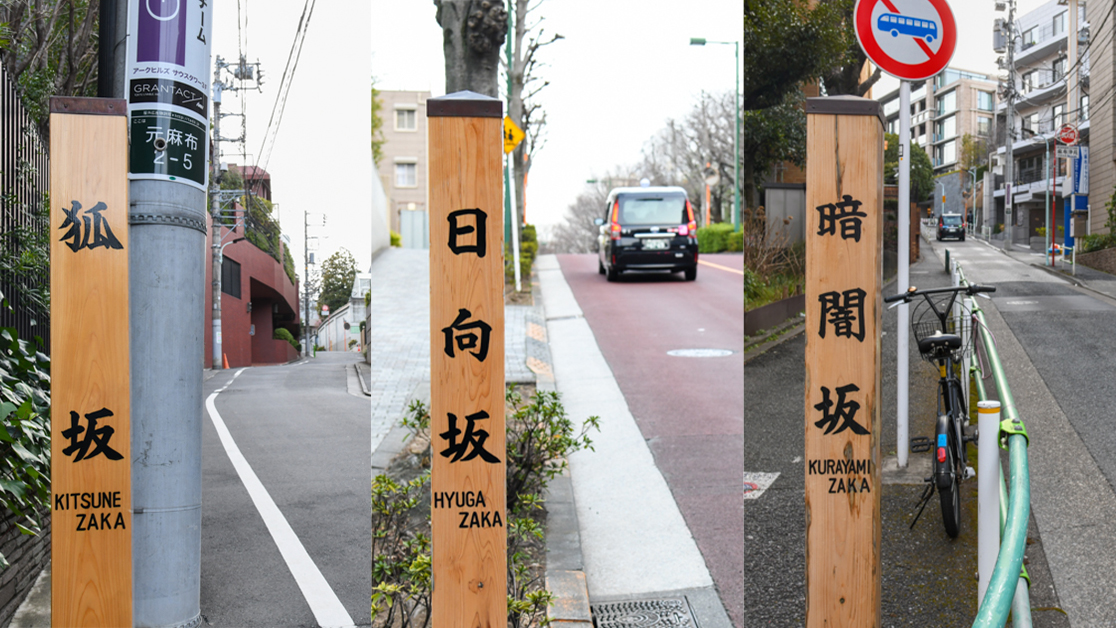 The geography of Minato Ward is mainly divided into the Musashino Plateau in the West and the Bay Area in the East. The city, built on geography with many elevation differences, has many slopes. More than 70 wooden guides stand. It is said that there are more than 100 slopes in Minato Ward.
What is interesting is that the slopes in Minato Ward were named long ago in the Medieval Era and Edo Period. Some of the names of places from which the names of the existing slopes were derived are written on historical maps from the Edo period.
Many names of the slopes are derived from the spots, stores, and events that happened here. "Kinokunizaka" was closeby the residence of Kishu Tokugawa Family. "Hottazaka" was the road that led to the lower residence of Hotta, the feudal lord of Sakura until the end of the Shogunate. Many slopes related to Daimyo residences remain in Minato Ward.

Nogizaka 46, Sakurazaka 46, Hinatazaka 46… All these groups were derived from Minato Ward

2011-debuting idol group Nogizaka 46 and sister groups Sakurazaka 46 and Hinatazaka 46 are called "Sakamichi Series." Did you know that the slopes where the group names were derived from are all located in Minato Ward?

The first slope is "Nogizaka," close to Nogizaka Station. This slope ran close to the former office of the production company of Nogizaka 46 and is a road with heavy traffic.
Many slopes in Minato Ward have names from Medieval times, but this slope was called Nadare Slope, Yukiai Slope, or Hizaori Slope. Until the Meiji era, the slope was called Yurei Slope. The residence of Meiji Shogun Maresuke Nogi was located by the slope. However, the slope was renamed Nogizaka to pay respect to Shogun Nogi after his death.
The Nogi Shrine which was built in 1923 and enshrines Shogun Nogi, stands close by. The shrine is famous for Nogizaka 46 members participating in the Coming of Age Ceremony every January. It has become a "pilgrimage" spot for Nogizaka fans.
Next, "Sakurazaka," which is the origin of Sakurazaka 46, is in the South of "Roppongi Keyaki Street" within Roppongi Hills. Compared to "Keyakizaka," a famous spot in Roppongi and the name where former group Keyakizaka 46 got its name from, Sakurazaka has a quiet atmosphere.
Someiyoshino cherry blossoms are planted along both sides of the street, and they bloom in the Spring, just like the name, "Sakurazaka." Also, "Sakurazaka Park," also known as "Roborobo Park," is along the slope. The unique park has robot sculptures and 10 slides.
Hinatazaka, where Hinatazaka 46 got its name from, is in between Mita 1-chome and 2-chome. It is a three-minute walk from Exit 2 of Azabu Juban Station, just ahead of Ninohashi over Furukawa.
Its correct name is not "Hinatazaka" but "Hyugazaka." In the early Edo Period, there was the residence of Tokuyama Domain Hyugamori Mori.

The name of the ghost Slope was abolished at the same time as the funeral of General Nogi Taisho, and it was changed to Nogizaka. In addition, it was also called the avalanche slope.

In the middle of the Meiji era, this name was created by a large cherry tree until the war was made in the new route. 150 Someiyoshino are planted on the perimeter road of Ark Hills which leads from Sakurasaka to Spain slope. Cherry tunnels are lit up at night and many people visit each year.

There was a mansion of the Tokuyama clan Mori Hinata Mamoru on the south side of the early Edo period. The origin is not known though it was good with the sleeve shaking slope. It was called the Hinata slope by mistake.

The slope that appears in Chushingura! A must-go slope for history lovers.

Every slope in Minato has a profound history. Of those, some names of slopes are derived from Watanabe-no-Tsuna, a samurai in the mid-Heian Era. He served samurai Minamoto-no-Yorimitsu and was one of the "Yorimitsu Shitenno" along with Kintaro model, Sakata-no-Kimitoki. He is known to have beaten Shutendoshi and fought against Oni at Rashomon.
Tsunasaka and "Tsunanotebikizaka," close to Hyugazaka, were named because the house of Watanabe-no-Tsuna was nearby. Also, "Dokizaka," a three-minute walk from Akabanebashi station, is said that it was named that way because Watanabe-no-Tsuna bought a riverbank-haired horse there.
On the other hand, "Nambuzaka," close to Roppongi Icchome station and Tameikesannno Station, was the setting of the famous "Nambuzaka Yuki no Wakare" scene of 'Chushingura,' a show based on the Raid of Akoroshi. The Asano Tosamamori residence, where Reizeiin lived after the seppuku suicide of her husband, Asano Takuminokami, was just by this slope. And on the day before the raid, Oishi Kuranosuke said farewell to the wife of his lord and walked down the snowy slope.
This is a dramatized story created afterward, but many Chushingura fans visit the slope. By the way, there are two "Nambuzakas" in Minato Ward. The Nambuzaka related to Chushingura is not the Nambuzaka of Minami Azabu, but the Nambuzaka of Akasaka, so keep that in mind.

The origin of the name of Tsunasaka is a legend that one of the four kings of the Heian period, "Watanabe Rope", was born in the vicinity famous for the demon extermination of the Rashomon gate.

The rope's Guide slope is the name of "Watanabe Tsunabe" as well as Tsunasaka. "Watanabe Rope" is one of the four great kings of the Heian period, famous for the demon extermination of the Rashomon, and the legend that he was born in the vicinity. It is called the uba slope, and there is a theory of Baba slope, too. The tenement House of the old samurai mansion faces the slope and stands.

Famous both for having been the spare residence of the Nanbu family in the early Edo period and for "Chushingura" (fictionalized stories of the 47 ronin).

Next, I would like to pick up three slopes with unique names. The first slope is in Akasaka 6-chome, called "Korobizaka." As it is named, it was easy to trip while walking this rugged road during the Edo Period.
Nowadays, the road is paved and is easy to walk, but you can see that the slope is bumpy if you look from the bottom, and it is not hard to imagine how hard it was to walk this slope long ago. Nearby, there is the Nambuzaka, the Katsu Kaishu Residence with sculptures of Katsu Kaishu and Sakamoto Ryoma. Also, Akasaka Hikawa Shrine, which is close to the slope, would be a must-see for history lovers.
Kurayamizaka, which is close to Azabu Juban Station, is a narrow slope with traffic. If you go up the slope there are "Warning" and "Slow Down" signs. That is because the top of the slope has a curve and is covered with trees, making it "darker" even in the daytime.
Yureizaka, nearby Shirokane Takanawa Station, is one of the seven Yureizakas in Tokyo. Many temples such as Zuioji, Ninganji, Butsuoji, and Gyokuhoji surround the slope. Because of its melancholic atmosphere, it is said to have been named Yureizaka. On the top of the slope are two parks that explain the history of this land, Kamezuka Park and Mitadai Park

It was called because the road was bad from the Edo period, and the passing people often fell. The former Hikawa-Zaka side of the temporary Moritokuji temple was also called Fall aka.

One of the three wonders of Azabu is divided into four slopes. It is big Kurosaka where there is one daikokuten of the tanuki slope and the seven lucky gods that the raccoon who is bewitched has come out. There is a beautiful red brick Austria Embassy in the middle of the dark slope that the tree was dark even in daytime lush. It goes out to the Hikawa shrine before the bishamonten of the seven lucky gods when going up the solitary Matsusaka which is named after the pine.

The temple is lined up on both sides of the hill, and because it is a lonely hill, this name seems to have attached, and there is a theory of Arisaka slope, too. There are Nagamatsu-ji temple with the tomb of Hagou Sorai, Tamhouji temple with a makeup Jizo, and a temple with a Morning Glory mound. There are about seven ghost slopes in Tokyo.

Slopes with names of Tanukis, Foxes, Snakes, and Animals

There are many slopes with names of animals in Minato Ward. The first one I will introduce is "Tanukizaka," close to the already introduced Kurayamizaka.
The slope was named that way because a tanuki that deceives humans appeared in the area. The slope, which runs through a residential area is quite steep and is not easy to walk up.
By the way, further up the slope is another slope named "Kitsunezaka." This slope has a new guidepost that was built last year and is said that a fox appeared close by. Getting deceived by a fox after a tanuki… The two slopes have a strange connection, but they are in a calm neighborhood, so no worries.
Another animal-named slope along Sakurada Street near Yureizaka is "Hebizaka." It was named after a snake that appeared in the closeby ravines. If you go there yourself, you can see that the slope is narrow, wide enough for one car, and its shape is long like a snake.

It is said that the raccoon of a person is infested. The reason for Asahi-Zaka is that it rises to the east. It divided into four slopes of one solitary pine of the Azabu Seven wonders, and there was "big Kurosaka" that there was one daikokuten of "tanuki slope" and seven lucky gods that the raccoon had gone out, and the tree was dark even in daytime lush "The Darkness slope", and "solitary Matsusaka" named after the Pine Go up to the Hikawa shrine in front of the seven Lucky gods Bishamonten.

It is imagined that the snake came out from the vicinity of the bush.

Lastly, I would like to introduce three slopes with great scenes of Tokyo Tower
The first slope is "Keyakizaka" in Roppongi Hills. The 400-meter slope is a great location to look at Tokyo Tower in the East. The scenery of tree-lined streets and Tokyo Tower is a fascinating view. The Christmas illumination held every year is becoming a regular Winter event.
Moreover, "Nagaizaka" and "Kiritoshizaka" in Shiba Park, right under the tower, are recommended. You can see many views of Tokyo Tower around Shiba Park. However, these two viewpoints can give you a great scene with a clean composition.

In March 2003, the slope was able to be resumed at Roppongi 6-chome. At the time of illumination, a lot of people visit every year.

From the Edo period to the early Meiji period, this name came from a place such as Shiba Nagai Town.

That's the end of our slope tour in Minato, Tokyo. How was it? Knowing the names of slopes and spots nearby would make a great day of sightseeing.
Categories
Tweet

"Maxell Aqua Park Shinagawa" is right in front of JR Shinagawa Station Takanawa Gate. The facility has many attractions and an aquarium with around 350 species, 20000 organisms displayed. It is a place where cutting-edge technology such as projection mapping and aquatic organisms collaborate, receiv...

Places in Minato, Tokyo Where You Can Feel the Sustainable Development Goals (SDGs)

With Christmas Season just around the corner, illumination events have started in many parts of Minato Ward, Tokyo. Here, we will be reporting on the latest information and the actual events themselves.https://visit-minato-city.tokyo/en/articles/442 Maxell Aquapark Shinagawa "NAKED STAR AQUARIUM" ...

The illuminations start to light up cities as everyone gets ready for Christmas. Roppongi, where two major spots, Roppongi Hills and Tokyo Midtown, reside, attracts attention not only from Tokyo but from all over Japan. This year is no exception as various places in Roppongi start their original ill...