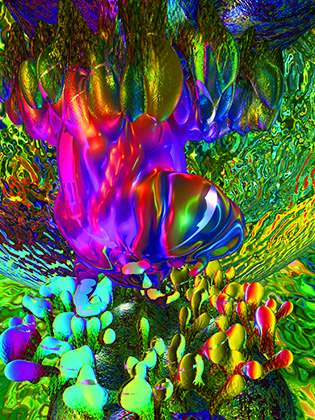 Let's imagine the future of five billion years after mankind may not exist. As a pioneer of CG artists, Yoichiro Kawaguchi, who has been active on the world stage since the 1970s, says that. The "five billion years after life" exhibited here are both programmed to form, grow and evolve, and are mathematically simulated under certain laws.
It is the one that the living thing was learnt in the history of 500 million years, and the appearance of evolution after 500 million years was created. "There is no creature in the universe without a vortex. The beginning of life is all a vortex. "
Mr. Kawaguchi, who talks so, has continued to express the birth and energy of life by making full use of the self-propagating "growth model". In the same way, Taro Okamoto left a work that expresses the birth and energy of life. This is the tree of Life, which was installed inside the tower of the Sun during the Osaka Expo in 1970. The history of the evolution drawn there is up to the Cro-Magnon person though it is the one that the time of "life" over four billion years was modeled. Mr. Kawaguchi's attempt to shape the life of five billion years later may be said to be a sequel to this "Tree of life" in a sense.