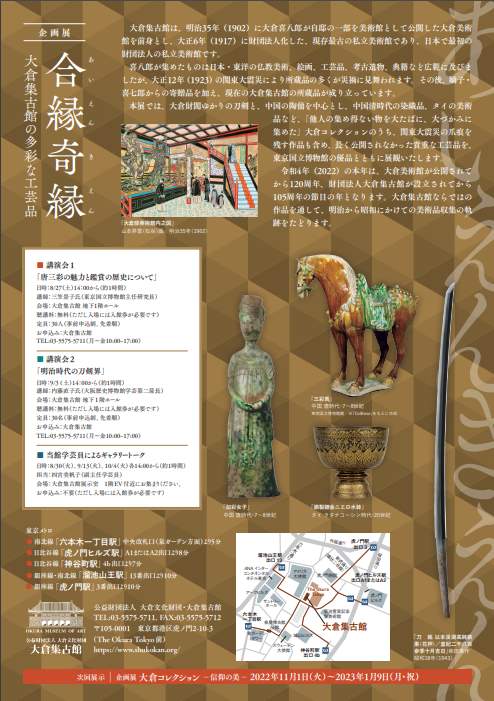 The Okura Shukokan is the oldest existing private art museum and the first private art museum in Japan, having been incorporated as a foundation in 1917 with the predecessor of the Okura Museum of Art, which was opened to the public as a part of his residence by Okura Kihachiro in 1902.
Kihachirō collected a wide range of Buddhist art, paintings, crafts, archaeological relics, and scriptures from Japan and the Orient, but many of his holdings were devastated by the Great Kanto Earthquake of 1923. Later, donations from his illegitimate son, Kishirō, were added, and the current collection of the Okura Shukokan is now in place.
In this exhibition, we will see valuable crafts that have not been exhibited for a long time, including works that leave traces of the Great Kanto Earthquake, among the Okura Collection, which "collected in large taba and large scales things that others could not collect" such as Chinese dyeing and weaving and Thai art objects, centering on swords associated with the Okura zaibatsu and Chinese pottery, together with the fine works of the Tokyo National Museum.
This year, Reiwa 4 (2022), marks the 120th anniversary of the opening of the Okura Museum of Art and the 105th anniversary of the establishment of the Okura Shukokan Foundation. Through works unique to the Okura Shukokan, we will trace the trajectory of art collection from the Meiji era to the Showa period.