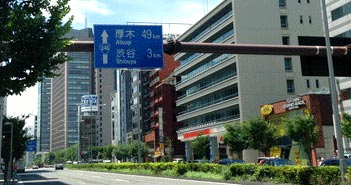 From Miyakezaka to the intersection of the Meiji Dori (east exit of Shibuya Station), the Chiyoda-ku and Shibuya are in between, including Akasaka, Aoyama, Omotesando and Curio Street. There are many greenery, such as Higashimiya Imperial Palace, Meiji Jingu Gaien, Aoyama Gakuin, and other buildings that face the United Nations University, Kostuya Castle, Aoyama Gakuin and Ao (multi-commercial building). There are many companies, and it is popular as an office town and a fashion street.