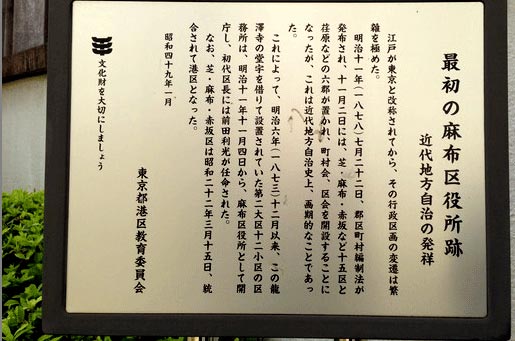 In the current port area, Akasaka-ku, Azabu-gu and Shiba-gu were established in the district by the municipal organization of the municipality on July 22, Meiji 11. The range of Azabu-ku is mainly present in Azabu and Roppongi. In Ryuzawa-ji temple, the second district of December, Meiji 6, was placed in the ward office of 12 small, but it was decided to open the office of the Azabu Ward as a ward office on November 4, Meiji 11. The first mayor was appointed by Toshimitsuru Maeda. The number of units at the time of the opening was 7813 units and the population was 26000. On March 15, 1947, the Akasaka-ku, Azabu-ku and Shiba-ku were integrated, and the current Minato-ku was born.