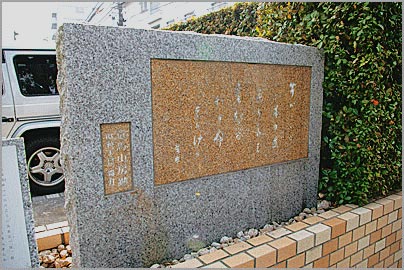 It is Mokichi who written a lot of songs on the stage in Aoyama, but the song monument is located beside the parking lot of the luxury condominium nearby. This phrase was announced in Taisho 3, "The dirt dirt and the way of the one road and the Spirit Kokuta (Tamatsu) become my life." It is said that the song Wind showed one leap along with it although there was a death of mother and a teacher Ito, and a tragic thing one after another to the personal affairs in the previous year. The Red sun is blazing, and we must walk on this one road. It is a view of Mokichi's own feelings which overlapped with the scenery of Aoyama at that time. While getting the reputation as a poet, Mokichi was crushed for the reconstruction of the hospital, but once he left Aoyama, he did not return until he died at the age of 72 in Showa 28.

Mokichi was devoted to the creation of the tanka called the Douma Mountain bunches in the hospital management.