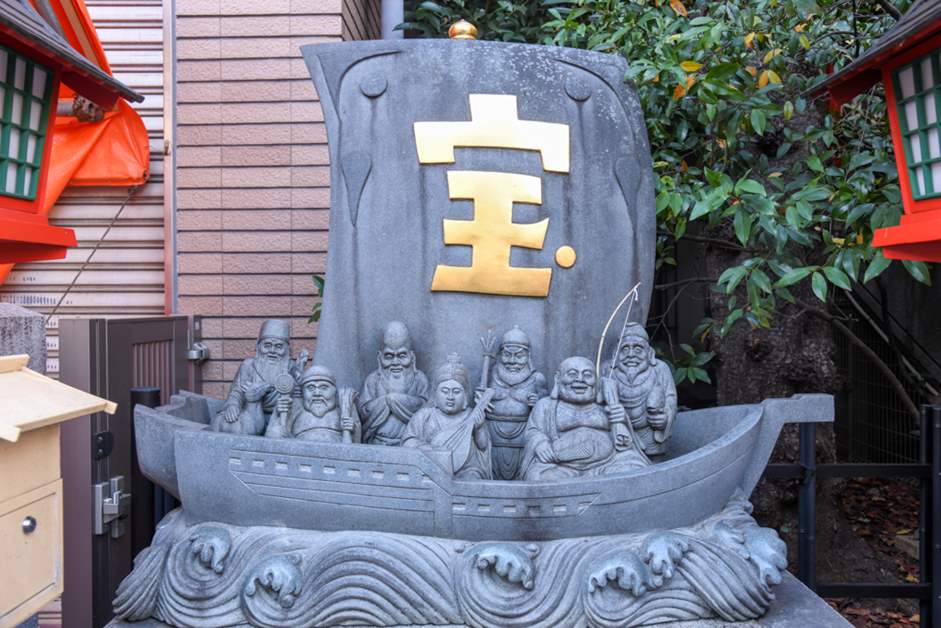 The "Minato Shichifukujin Meguri", which tours around the 8 shrines and temples in Minato Ward, Tokyo. It will be held in 2022 from the 1st to the 10th of January. In the Hatsumoude season, the Shichifukujin Meguri takes you to 6 shrines and 2 temples in Shiba, Azabu Juban, and Roppongi. Also, one characteristic of this tour is that you can sightsee the famous Tokyo Tower and Roppongi Hills as well. In this article, I will show you the rules of going around and the official recommended course for those who will be doing it next year.

Minato Shichifukujin Meguri began in 1966. Its predecessor was the "Azabu Inari Shichifukujin Moude", which was practiced in the early Showa era. Right now, Hoshuin (Benzaiten), Iikura Kumano Shrine (Ebisu), Daihoji (Daikokuten), Azabu Hikawa Shrine (Bishamonten), Sakurada Shrine (Jurojin), Tenso Shrine (Fukurokuju), Hisakuni Shrine (Hoteison), and the Juban Inari Shrine "Treasure Ship" are included in the tour. Every year, it is held from the 1st of January to the Coming of Age Day, and in 2022, it will be held from the 1st to the 10th of January. (Goshuin stamps will be supported every day from 9 AM to 5 PM, and on the last day until 2 PM)
During the Minato Shichifukujin Meguri, you can receive the Shichifukujin Goshuin stamps on either the "Exclusive Signing Paper" that you receive in your first spot or a pre-stamped washi paper. (One Goshuin stamp is 500 yen)

First, let's think of a route that suits your objective!

Minato Shichifukujin Meguri is 6 km long in total. If you're only going around all the shrines, it only takes around 3 to 4 hours by foot. However, if you consider the crowds in the shrine and the breaks you take in between, you should estimate a few more hours for the whole tour. Also, what is important is the route. There is no fixed route or order in Minato Shichifukujin Meguri. It would be best to choose your route thinking of "where to get lunch" and "places you want to visit".
This time, I would like to walk the actual course modeled on the reference route above posted on the port seven lucky gods tour official site.

The first place to stop by is the "Hojuin", where Benzaiten-sama awaits.

We start at Tokyo Metro Akabanebashi Station before 10 AM and walk for 5 minutes to our first temple "Hojuin (Benzaiten)".
Hojuin is inside the park of Shibakoen, under the Tokyo Tower. It is a Tacchu (sub-temple) of Zojoji. Though it began in 1685, it has a modern-taste main building.
Here, Benzaiten-sama is enshrined with the main Amida Nyorai. The Benzaiten enshrined is said to be the "Kaiun Shusse Daibenzaiten", which was held as a small Buddha statue by Ieyasu Tokugawa. You can feel the powerful aura from the small temple with the hidden Buddha statue, which is only disclosed on April 17th, the day Ieyasu passed away.
There are also seasonal Goshuin stamps and mini stamps. It is a popular temple for Goshuin touring and is always people visiting the temple.
Also, be sure to visit the joined woodblock Emmadaiou statue. With a height of 2 meters, it is registered as a designated tangible cultural property of Minato Ward. Other than that, there is the "Sukumi Statue" of a frog, a snake, and a slug. Also, there is the "Emmamimi" where you can confess your wrongdoings. There are many things to look at even at our first stop.

The Sunomi I of Zojoji Temple of the Jodoshu temple is founded in 1685 in the second year as a separate temple, with the King Enma and the dialectic-year-old angel of the white hasuike. The Benzaiten, which has become one of the seven lucky gods of the port, received the adoration of the sculpture, the Genyorasa and Tokugawa Ieyasu in the Takeko Island in 858 when the Kimiidera founder. The Enma king statue of the Minato-ku important cultural property is enshrined.

After exiting Hojuen, walk the Sakuradadori for approximately 10 minutes. The front of the Iikura intersection in the middle of Kawarakezaka is where our next stop is, the "Iikura Kumano Shrine (Ebisu)".
There are no certain records of the founding of Iikura Kumano Shrine. However, legends say that around the 7~8th Century, it was founded beside the oceans in Shibaura, and was reconstructed in its current location around the Bunmei period in the 15th Century, solicited by Dokan Ota.
Dokan often visited the shrine, bringing with him red snappers to offer after prevailing in battles. From its relevance with Ebisu, who holds a red snapper in its left hand, it was called the "Ebisu Inari" and became one of the shrines of the Minato Shichifukujin.

It is said that the Genroku of Kumano Shrine is not understood by the fire of 16 years and the old record has been burnt down. In the past few years, new benefits have been added to this shrine, and a soccer amulet will be awarded. According to the shrine, the gods of the Kumano Shrine, eight company chops, which has three legs, is a symbol of the J. League, so the number of people who worship has increased, rather than the player himself, there are many families and supporters. "Soccer Amulet" approved by the Football Association is white and blue. It shows the presence with the clay of the Ebisu-sama. One of the seven Lucky gods of Minato-ku, Ebisu-sama is enshrined. Ebisu-sama has a fishing rod on his right hand and a sea bream on his left hand. Originally, it was the god of the fisherman, and it has been believed as a god which brings the safe sailing and the voyage safety. When commerce became popular, it came to gather the faith as the god of the business. This neighborhood was a very good stroll road, and it was one of Fujimura's favorite places according to "Ikura near" which I wrote when Shimazaki Fujimura lived in Ikura.

To get to our third stop, "Juban Inari Shrine (Treasure Ship)", we walk the road along Furukawa for 20 minutes. The river flows from the Shibuya direction to Tokyo Bay. There is a kid's park with public restrooms, so taking a break on one of the benches is recommended.
Not only the order of visiting but the way you visit can be arranged as you like. For example, here you can use the subway from Akabanebashi Station to Azabu Juban Station. it's also fine to use shared bicycles which has various places to park them. You may also take a few days to go all the stops and do some sightseeing in between. You can choose how you visit the temples and shrines.
You might be enticed to go to the bustle of the shopping district at the Azabu Juban intersection. However, let's go to the Juban Inari Shrine first.
Juban Inari Shrine is a "Treasure Ship Shrine", unique in the Minato Shichifukujin Meguri. Next to the Torii gate with a grand Shimenawa (sacred festoon), there is a stone statue of a treasure ship with all seven of the Shichifukujin riding on it.
The shrine has its roots in Suehiro Shrine built in the Keicho era and the Takenaga Inari Shrine built in the year 822. After both shrines were destroyed during World War II, they merged as one and became the Juban Inari Shrine.
Other than that, some places would make you want to take photos, such as the stone statue from the Legend of Gama Pond, one of the Seven Wonders of Azabu.

The 2 shrines of Suehiro Shrine and Takecho Inari Shrine merged after the war and it was renamed Juban Inari Shrine. The original shrine was said to have been founded more than a millennia ago. As it was conferred with the Amulet of Fire Protection from the legend of the Frog Pond, the frog talismans are very popular. In November, they have the Festival of the Rooster, the only one in Minato district, and many people come looking for rakes. In the Pilgrimage of the 7 Gods of Maritime Fortune during the New Year, it becomes a pilgrimage site for the Treasure Ship.

Lunchtime at the Azabu Juban shopping district, where it's fun to walk and eat

After collecting three of your Goshuin stamps, it's time to eat lunch. The Azabu Juban shopping district, full of traditional restaurants and stylish open cafes, is right in front of Juban Inari Shrine. You won't find it hard to look for a place to eat. You can eat inside the restaurants. Also, though it is quite cold, you can buy bento boxes and take out food and eat them in the Patio Juban park, where the "Kimichan Statue" stands.
Another fascinating point of this shopping district is that there are many stores where you can buy snacks such as Taiyaki and Obanyaki. You can then eat them as you walk around. If you want something related to the Shichifukujin, you should go to "Kibundo" in Zoushuki Street. Here, you can purchase great-tasting Shichifukujin Ningyo-yaki. The store was founded in Meiji 43 (1910) and the owner has been making it for more than 50 years, using the traditional technique.
Now, after finishing lunch, recharged, and ready to go, it's time to go back to Minato Shichifukujin Meguri. We still need to go to 5 stops in order to visit all of the temples and shrines. What awaits us in the latter half of our journey? Find out in the second half of this article!

This shopping street extends from Azabujuban Station toward Roppongi, and its history goes all the way back to Japan's Edo era. The street is lined with many long-standing shops, and even though it's located right in the center of the city, it still has that calm, friendly downtown atmosphere that it once had in years past. There are also many rows of newer stores as well that have a stylish ambiance and attract large numbers of shoppers from abroad. The rest spot Patio Juban features a statue of a girl named "Kimi-chan," who watches over the Azabujuban neighborhood.

Minato Ward is home to around 40 shrines and 280 temples, with some famous places including Zojoji and Nogi Shrine. Out of those, did you know that there are "annexes" that follow the famous head temple and "branch shrines" where the faraway gods of those shrines are enshrined in a faraway place? To...

Wanting to wish for true love? Or do you want to tell your feelings to someone you love? Choosing where to go pray or tell your feelings is important. So this time, we selected "love fulfillment spots" in Minato Ward, Tokyo from our perspective. Here are some great locations that are matchmaking pow...

[Minato City History Walk] Minato City, a meeting place between Takamori Saigo and Kaishu Katsu that led to the "bloodless surrender of the Edo Castle"

Takanawa Gateway Station was established last year as the first new station on the JR Yamanote Line in 49 years. The name of the station, "Gateway" (meaning entrance) was chosen with the aim of turning the area into a hub of international exchange, but it also has the meaning carrying the history of...