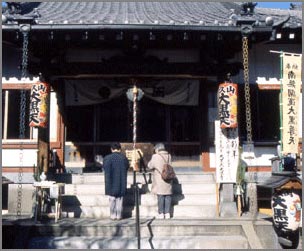 Daihoji used to hold a festival for the Daikokuten (a Japanese deity) on the "Nenohi" (day of the rat), but this no longer takes place. The slope in front of the temple is called the Daikokuten-saka (slope of the Daikokuten) named after the Daikokuten enshrined in the temple.
At Daihoji, which is known by local residents as the "solitary pine tree of Lord Daikoku", and it enshrines Daikokuten who is said to give visitors good luck and fortune. During the Setsubun festival, the temple holds a grand bean-throwing event.