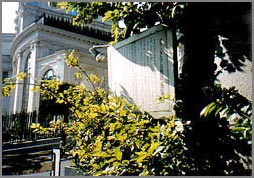 It is a Netherlands that was the temple of long-ji. Netherlands was a country that was trading while the Japan was closed, based in Nagasaki, and then moved to Yokohama. Long-ji temple was used as an embassy in Edo and became the stage for diplomatic negotiations with the shogunate and European countries. Unfortunately, long-ji temple is not in existence, but the chalk mansion (Shuwa Takanawa Regtens) is built on the other side of the road reminiscent of the former approach.