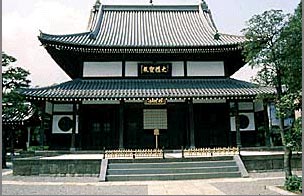 During the Edo period, when new religions were strictly forbidden, the only exception was the Obaku school of Buddhism, brought by the Ming monk Ingen, who was invited to come to Japan. In the 10th year of the Kanbun era (1670), the temple was founded by Mokuan, Ingen's disciple. Mokuan's calligraphy is so famous that he is called one of the "Three Calligraphists of Obaku," along with Ingen. The main hall is thought to have been built after the mid-Edo period, and is an Important Cultural Property. There are tombs of famous people, including the parents of Hirobumi Ito, but you must obtain permission from the temple before visiting them.