Touring the Memory of Eiichi Shibusawa that remains in Minato City, Tokyo and Industrial Places of Origin from the Meiji/Taisho era 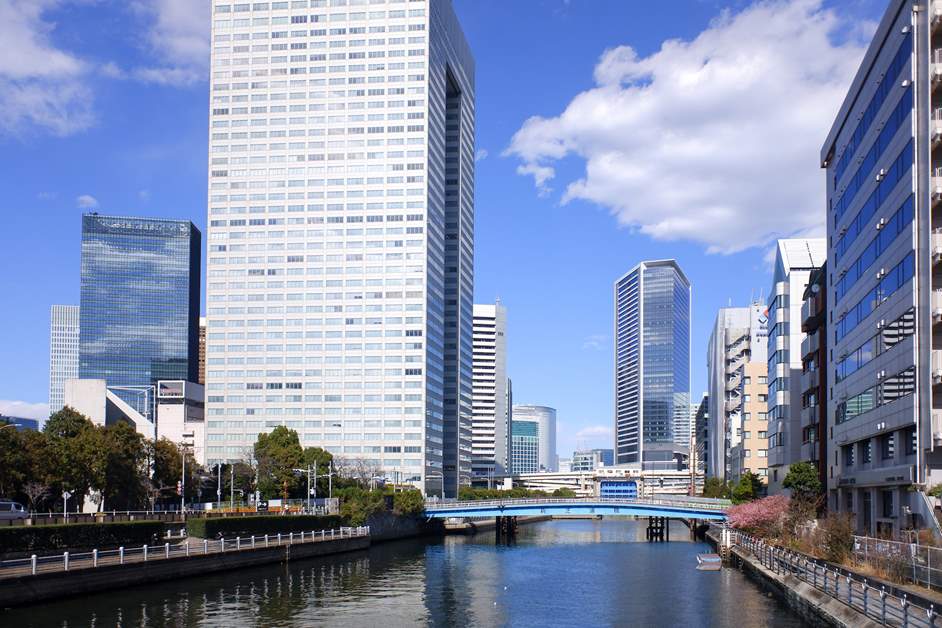 This year’s NHK Taiga historical drama started this month. The drama depicts the life of a businessman in the Meiji era/Taisho era, Eiichi Shibusawa. He was involved in establishing over 500 companies, including Japan’s first commercial bank, Daiichi Kokuritsu Bank, and the Imperial Hotel. Shibusawa is referred to as the “father of Japanese capitalism.” He has roots in Minato City, Tokyo, having his residence in Mitatsunamachi. There are many companies in Minato City that were established in relation to Shibusawa, and there are famous companies that still exist today. In this month’s issue, we will discuss the achievements of Eiichi Shibusawa that remains in Minato City and tour the “places of origin” that tell us about the history of the Meiji and Taisho era when Shibusawa was active in.

“Minato City” at the beginning of the Meiji era

In 1868 (Keio 4), Takamori Saigo and Kaishu Katsu held a meeting at the Satsuma Domain residence in Tamachi Tokyo that would lead to the bloodless surrender of Edo-jo Castle. Minato City, Tokyo, was a place that led to the restoration of imperial rule. At the domain residence in Tokyo site near JR Tamachi Station, there is a monument, “Monument of meeting place, Takamori Saigo and Kaishu Katsu for the surrender of Edo-jo,” that tells the records about the time (it is currently not open to the public due to construction in the area). It was 1878 (Meiji 11) when Shibaku, Azabuku, and Azabuku were established, which were the names before Minato City. After that, in 1947 (Showa 22), the three wards merged to establish the current Minato City.
In the Meiji era, Japan adopted the policies: enrich the country, strengthen the army, and promote industrial development. Japan achieved significant modernization by inviting technicians from the West. Minato City at the time was before the landfill of the coastal areas, and the coastline reached the current JR Tokaido Line. In 1872 (Meiji 5), Japan’s first railway opened between Shimbashi and Yokohama. The first Shimbashi Station in Shiodome District became the gateway of Tokyo, and the Shimbashi area developed as the hub of cargo and transportation.
After that, Tokyo Station opened in 1914 (Taisho 3), and the first Shimbashi Station was renamed Shiodome Station (it was a different station from the current Toei Oedo Line and Yurikamome Shiodome Station), making it a station reserved for cargo. Meanwhile, Karasunomori Station, where the current Shimbashi Station is, became the second “Shimbashi Station.” Furthermore, Shiodome Station was abolished in 1986 (Showa 61). Currently, the site has Kyuushinbashiteishajouato, which reproduces the first Shimbashi Station.
When the Meiji era began, Eiichi Shibusawa was 28 years old. At the time, Shibusawa was a shogunate retainer working for Yoshinobu Tokugawa. He worked as an attendant for Yoshinobu’s younger brother, Akitake Shimizu, and visited various places in Europe for almost two years, including Paris, where the international exposition was held. He had just returned to Japan that year after experiencing Western culture first hand. When Shibusawa returned to Japan, the shogunate had already fallen. Shibusawa moved to Shizuoka following Yoshinobu, working for the Shizuoka Domain. After that, he worked for the Ministry of Popular Affairs and the Ministry of Finance. In 1871 (Meiji 4), he moved to Tokyo and retired from his job as a Ministry of Finance bureaucrat two years later, taking his first step as a businessman.

From Meiji to the Taisho era, Shibusawa was involved in countless businesses, leaving behind many accomplishments in modernizing Japan. According to materials published by The Shibusawa Eiichi Memorial Foundation, Shibusawa was involved in 35 businesses in Minato City. One of the famous achievements was the establishment of the company before the current Tokyo Gas, Tokyo Gas Co., Ltd.
In 1874 (Meiji 7), the gas industry was government-owned when Tokyo’s first gas factory was established in Hamasakicho, Shibaku (current Minatokukaigan 1 chome). After that, in 1885 (Meiji 18), Shibusawa and others bought the business when it was sold to be private, establishing Tokyo Gas Co., Ltd. Shibusawa became the first president. He worked as the president for 35 years after that, and the gas industry is one of Shibusawa’s famous achievements.
Right outside the South Exit Connecting Road on JR Hamamatsucho Station, there is the “Foundation Monument” that shows the place of the Tokyo Gas establishment. The monument reads, “In 1883 (Meiji 16), we began to supply gas, installing gas lamps in Ginza in the following year. The pedestrians were amazed at the sight.” It described the dawn of the gas industry in Tokyo.
When the company was first established, gas was mainly used as fuel for street lamps. In 1883 (Meiji 16), 85 gas lamps were built from Kanasugibashi in Minato City to Kyobashi, Chuo City, lighting up the nights in Ginza with modern light. Shibusawa became involved in the gas industry after that, but the lights were special for Shibusawa as he experienced the Western culture when he was young, such as in Paris with streets with gas lamps.

”I arrived at the Mitatsunamachi house at 6 o'clock. It is magnificent and excellent. It has a good view, sun, and breeze. It is also comfortable and convenient to live in.”
−Ryumon Magazine Issue 254 (reference from The Shibusawa Eiichi Memorial Foundation “Eiichi Shibusawa Biography” Volume 29)
Mitatsunamachi is located in an elevated area up Hyugazaka from the direction of Azabu-juban Station. Fukagawa residence’s front room was relocated to this residence. It was a Japanese-style two-story wooden building. In 1929 (Showa 4), it was partially demolished to add a Western-style building. Although the area is surrounded by skyscrapers now, at the time when Shibusawa lived, he must have been able to overlook the surrounding sceneries. This passage is a record of how much Shibusawa loved the newly built house in Mita.

In later years, the mansion was inherited by Eiichi’s grandson, Keizo Shibusawa. Keizo helped Eiichi with the business for many years and practically inherited Eiichi’s position. Keizo was also known to be related to Minato City, working as the Governor of the Bank of Japan and the Minister of Finance. Keizo had a deep knowledge of folklore and built the Attic Museum on the second floor of the garage, storing everyday articles from throughout Japan. After the war, in 1949 (Showa 24), the building and land became the property of the government. It was the public residence of the Minister of Finance, and now it is called the Mita Conference Hall. The Shibusawa family's building was relocated in 1991 (Heisei 3) when the house was renovated from Misawa City to Komaki Hot Springs in Aomori Prefecture. The building has been decided to be relocated again next year to Tokyo.

Other than the traces that Eiichi Shibusawa left behind, there are other areas in Minato City with the fragrance of Japanese modernization during the Meiji era.

After the restoration of imperial rule, many daimyo mansions under the Edo-jo castle were confiscated by the Meiji government and were used for many purposes. The current Minato City also has many places that used to be daimyo’s mansions. For example, Keio University’s Mita campus was built in the Shimabara Domain’s Tokyo suburban residence site, and Aoyama Cemetery was built in the Gujo Domain, Mino’s Tokyo suburban residence site.

Daimyo’s mansion sites were also used as places for construction. In 1875 (Meiji 8) in Minato City, the Ministry of Engineering’s Akabaneseisakusho (Akabanekosakubunkyoku) was built near the Kurume Domain residence in Tokyo, near Akabanebashi, which played a significant role in the industrial development in Japan.
The Ministry of Engineering led the industrial development policy in the Meiji government. In machine manufacturing, Akabaneseisakusho was Japan’s first government-owned factory with more than 50 kinds of advanced crafting machinery such as boilers and lathes. The factory built metal materials for the railway and bridges, greatly contributing to industrial development.

The area long Furukawa, where Akabaneseisakusho was, was a major industrial site where large and small factories gathered. From the Tengenji bridge, the name changed from Shibuyagawa river, and Furukawa, which flows in Tokyo Bay through Furukawabashi, Ichinohashi, Hamasakibashi with about 4.4km in length, was excellent for transportation by boat. The areas along the river became major industrial areas, with gradually more shops and houses. There were famous factories along Furukawa, such as Shibaura Seisakujo, later known as Toshiba, with the headquarter building in Shibaura 1 chome. Tokyo Gas Co., Ltd. that was mentioned earlier, also had a famous factory along Furukawa.
The place where Akabaneseisakusho used to be is now an area with the Tokyo Saiseikai Central Hospital and others, and there are no sights that remind you of the time in the past. The industrial area along Furukawa remains ever slightly now. On the other hand, these areas where town factories used to gather are among the “sought after neighborhoods” in Tokyo, such as Shirokane and Azabu-juban. Such changes in Minato City may come as a surprise.

Atagoyama’s Tokyo Broadcasting System, which later became NHK, was a place Eiichi Shibusawa visited several times in his later years. On November 11th, 1926 (Taisho 15), Shibusawa, who was 86 years old and working as the United Nations Association chairman, commemorated World Peace Memorial Day and gave a lecture on the “Peace Memorial Day.” It was a time of continuous wars, including the Russo-Japanese War, Sino-Japanese War, and World War I centering in Europe. Through the new media of radio, Shibusawa asserted the importance of peace, and he continued the lecture until 1929 (Showa 4).
Atagoyama’s Tokyo Broadcasting System had two pairs of symbolic steel towers that stood 45m tall. In 1939 (Showa 14), its role as a broadcasting station finished, and from 1956 (Showa 31), it started being used as the world’s first Museum of Broadcasting. The building was then renovated in 1968 (Showa 43), and it is still used as the NHK Museum of Broadcasting to tell the history of Japanese broadcasting.

Toranomon (1 chome) has a commemorative monument that tells us about the beginning of Japan’s famous major newspaper. ”The Place of First Newspaper Issue” monument was built in commemoration of the start of Yomiuri Shimbun (newspaper) in 1874(Meiji 7) by a letterpress printing shop called Nishusha, in an old samurai residence.
The Place of First Newspaper Issue” monument in Sotoboridori is att a place where Yomiuri Shimbun (newspaper) was founded. A company called Nishusha, which was running a letterpress printing shop in Nishusha, moved to an old samurai residence in the area and started a small newspaper for ordinary people in 1874 (Meiji 7). At the time, the area address was Kotohiracho Ichibanchi, so the monument has inscriptions to the area as a reference.

The company took its name from “Yomiuri Kawaraban,” which was a communication method during the Edo period. The newspaper used easy Furigana instead of only Kanji for people to understand. When established, people who never received Kanji education welcomed the newspaper saying, in reference to the address, “News travels quickly (Toranomon), and Hiragana letters are the best.”

Yomiuri Shimbun (newspaper) was easy to understand and read, so it solidified its current position as the newspaper for the mass.