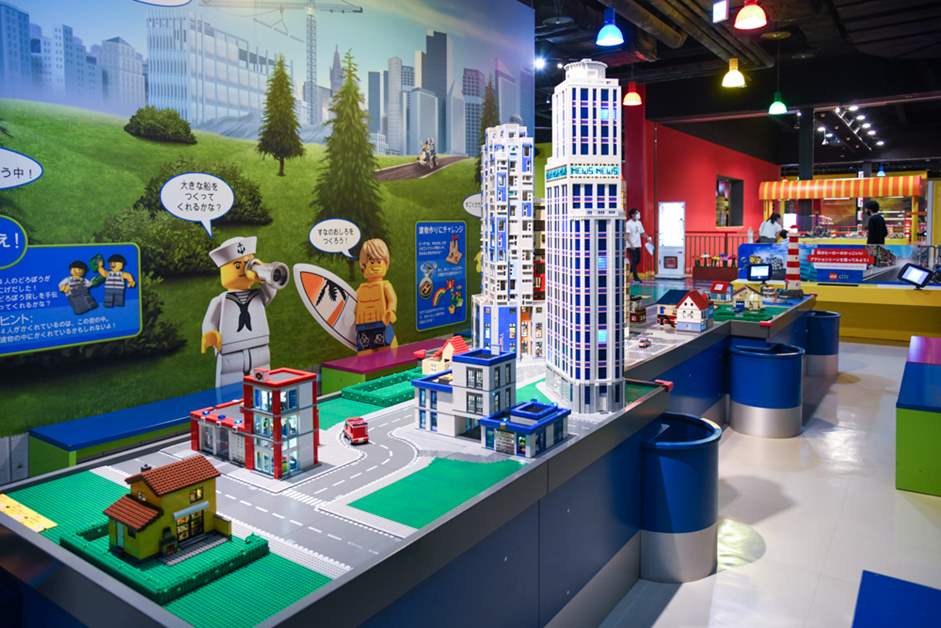 At the beginning of autumn when the temperature drops, don't you think it would really help if there was a nice place indoors to go have fun with your family? Here I'll introduce you to "Legoland® Discovery Center Tokyo" at DECKS Tokyo Beach, one of the most popular indoor sightseeing spots in Minato Ward, Tokyo.

"Legoland® Discovery Center Tokyo" (from here as Legoland Tokyo), an indoor theme park with 11 attractions with Lego motifs, is one facility in DECKS Tokyo Beach, where large-scale entertainment spots such as Joypolis and Madame Tussauds Tokyo gather. In the two buildings in the facility, Island Mall and Seaside Mall, Legoland Tokyo has its entrance on the 3rd floor of Island Mall. Note that this place is for families, so children must be accompanied by a guardian. Also, with entry restrictions from current COVID prevention measures, an online reservation is necessary to enter the facility. (See facility data at end of article)
After having your online ticket checked at the reception, it's time to go through the entrance gate with a "Minifig" silhouette, the small Lego figure, into the world of 3 million Lego blocks. First, we get on the elevator to the 7th floor. There are Lego characters everywhere and it looks exciting!
The facility is laid out in a way where if you follow the route, you can enjoy all 11 attractions. The first attraction you'll meet right as you go off the elevator is the "Lego Factory". Here you can have fun and learn how colorful Lego blocks are created from plastic grains inside a factory-like space.
The flow of "mixing materials", "melting materials", "shaping into a block", "coloring the block" is introduced with exhibits where you can learn hands-on. It is really easy to understand for Lego-loving children how "Lego blocks are made", something they would've wondered at least once.

A view of the "City of Tokyo" created by more than 1.6 million blocks

After getting knowledge about Legos, you go through "Kingdom Quest", a ride-type attraction where you become a knight and go on a quest with a laser gun to save the princess. Next up is "Miniland", where the miniature city of Tokyo is created by Lego blocks.
Walking into the overwhelming space with more than 1.6 million blocks, you can see Odaiba on the left. Behind the place you're in, DECKS Tokyo Beach, is the Fuji TV Headquarters Building with the spherical observation deck. On the other side of the Rainbow Bridge watched over by the Statue of Liberty, you can see the Tokyo Tower. All of them are created from just Lego blocks (no offense to Lego blocks). You'll be amazed to see the lifelike reproduction of the landmarks of Minato Ward.
Of course, the streets of Ginza, the Parliament Building, Sensoji Temple, and other landmarks of other wards in Tokyo are also shown. People relaxing in the city, walking across the roads, and working are all depicted by Minifigs. Also, when the room is covered in a night-like atmosphere, the buildings change into night scenery as well. The neon lights and the room lights are well reproduced and look real when you cut the scenery.
In the next space, "Creative Workshop", a staff who knows Lego well teaches you the fun of playing with Lego blocks. In some days, you might be able to get taught directly from a "Master Model Builder", one of the best Lego builders in the world with only 25 people around all Legoland Discovery Centers. The works you create change themes every season, and today I tried to create a beetle!
Other than that, there are attractions such as "Marlin Apprentice", where you fly around a fantasy world on a pedal-powered ride, "Lego NinjaGo® City Adventure", where you move your whole body in a Ninja-like tricky setting, "4D Cinema", where you can enjoy a 4D movie with 3D images with special effects. It's a series of excitement where families can enjoy a wide variety of experiences.

Lots of fun with Legos! At the shops, Legos are "sold by weight"

On the other hand, having areas where you can play with Lego blocks is one of the best parts of places with the name "Legoland". In "DUPLO® Village" for small children, there are jumbo-sized blocks that children and their siblings can play with only in Legoland Discovery Center.
You can play with blocks you don't have in your house, or you can show your skills at the "sacred land of Legos". If you move your hands, you'll love Lego even more. By the way, all places where people touch, such as blocks, attraction seats, and handrails in the facility are cleaned every day, so you don't have to worry when you let your children play around.
In the "Lego Racer Build Zone & Test Zone", you can make your own "Lego Car" with blocks and make timed runs around a variety of courses. In "City Builder", you can use your imagination to create new fictional cities. There are many places where not only children who love Legos but also children start playing with Legos can play around.
After creating a stop-motion animation with Lego blocks at "Dino Explorer -Discovery! Dinosaur Kingdom!" and finishing all 11 attractions, the last exciting thing is the souvenir shop. In the more than 400 types of Lego items, the one that catches our eyes is the "Pick-a-brick" area in the center of the store where you can buy Lego bricks per weight, and the "Build-a-Mini Figure" area where you can create your original Minifig.
At "Pick-a-Brick", Lego blocks of all shapes and colors are all sold at 10 yen per 1 gram. Here, using your imagination you nurtured from the attractions, why not choose the blocks while imagining what you will create? The Lego shop is one of the largest in the Tokyo metropolitan area, and there are also Legoland Tokyo limited items that even adults want.
Legoland Tokyo also lets you communicate between parents and children. Also, with the COVID-19 situation, it Is shortened and will be open from 10 AM to 4 PM. Also, every Tuesday and Wednesday are closed. In Odaiba, there are many indoor sightseeing spots other than LegoLand Tokyo, so it's the perfect area to go outside and walk around this time of year.
Legoland® Discovery Center Tokyo
Place: Minato Ward Daiba 1-6-1 DECKS Tokyo Beach Island Mall 3rd Floor
Phone Number: 0800-100-5346(10AM~2AM)
For opening hours, closing days, ticket prices, and other details, please take a look at the official website
Official Website
https://www.legolanddiscoverycenter.com/tokyo/
Categories
Tweet

Let's find out "the one and only truth" with Conan! Experiencing the Roppongi Museum "Detective Conan Live Museum: The Gift of Halloween"

Detective Conan is a famous mystery manga by Gosho Aoyama. "Detective Conan Live Museum: The Gift of Halloween" is a self-participatory entertainment where you can experience the world of the work, also popular in anime. The event is held at Roppongi Museum from February 11th (Fri) to June 5th (Sun)...

"Tamiya" is a famous model manufacturer. Did you know that the only Tamiya-operated company store in Japan is in Shimbashi, Minato, Tokyo? In this article, we will be making sweets decorations, a popular hobby, at "Tamiya Plastic Model Factory Shimbashi." To the hall of plastic models, "Tamiya Plast...

In the studio of the Japan Candle Association built inside Kameyama Candle House Aoyama in Minami-Aoyama, Minato Ward, Tokyo, you can experience original aroma candle making in a 2-hour lesson. You don't need to have to gather any equipment. Aroma candle making is getting more popular as an easy hob...

The Yurikamome Is Not the Only Option to Go to Odaiba! Full Comparison Between Odaiba Rainbow Bus & Tokyo Cruise