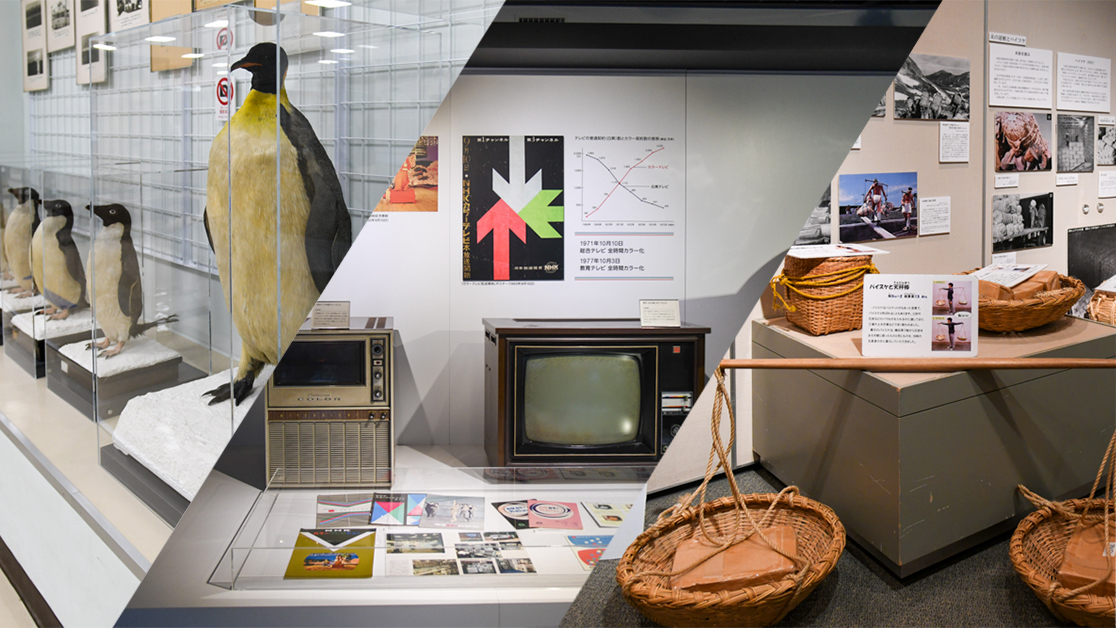 Minato Ward, Tokyo. Many exhibition facilities such as the New National Art Museum and the Minato Science Museum are here. In this article, we will introduce museums that focus on "learning" that stimulates intellectual curiosity.

The "Marine Science Museum" inside the Tokyo University of Marine Science and Technology Shinagawa Campus is a facility where you can learn the ecosystem of marine animals and the history of marine research of the school. It is themed on "Invitation to the Ocean".
The whale gallery can be seen first after going through the main gate. Here you can see the skeletal specimens of two rare whale species. The power of the over 17-meter specimen of the Right Whale cannot be felt without seeing it with your own eyes.
You can see the specimen not only from the side and the front but also from below, which looks like a bone tunnel. The other specimen, the Gray Whale, is also a rare specimen. It is the only female specimen from the Asiatic group.
The main part of the exhibit is the specimen of marine creatures that the university stored for education and research. For example, in the first "Antarctic and Galapagos Observation" corner, there are specimens of the Galapagos Sea Lion, Crabeater Seal, and the "largest penguin on Earth", the Emperor Penguin.
From there, there are many specimens of other creatures that are familiar to our daily lives to the rare creatures of the distant seas. Some of those include the Sunfish, Sea Bream, Sailfish, and the Dugong.
Being able to observe the mystery of nature's creations close by is a great thing about specimens.
Also, there is a static exhibit of the "Unyoumaru" training ship outdoors around 3 minutes from the exhibit room. 17 training ships have been used in the university from its predecessor.
The second training ship, Unyoumaru, contributed to the establishment of fundamental pelagic and marine fishery studies and the development of fishing grounds in the Kamchatka region. Why not take a picture with it?

Museum on the Shinagawa campus of the Tokyo University of Marine Science and Technology. The main building displays samples of stuffed marine life and skeletons, including sea turtles, lobsters, crabs, and otters, as well as fishing gear and models of training ships. In the whale gallery, a 17 m long complete skeleton of a North Pacific right whale is also on display. * Reservations are required for field trips. To make a booking, please see our website.

The first main radio broadcast in Japan started in 1925 (Taisho 14) by the Tokyo Broadcasting Station in Atagoyama. The "NHK Broadcast Museum" is built on the site.
The route starts from the reception on the 1st floor, up the elevator to the 3rd floor, and goes down to the 2nd floor. The history zone on the 3rd floor introduces the timeline of the history of the broadcast in Japan, from the beginnings of radio to the latest technologies.
Four months before the opening of the main broadcast station on Atagoyama, the first radio broadcast started in the Tokyo temporary broadcasting station. The station was built in a corner of Tokyo Higher School of Arts & Technology in Shibaura. In the exhibit "The beginning of Broadcasting", the reproduction of the temporary broadcasting station can be seen, with one mic on the desk.
From there, the exhibit shows the radio broadcast that spread in the Taisho to Showa era and the creation of television.
There are also displays of actual radios used in each era.
In February 1953 (Showa 28), the main broadcast started. In one corner of the building, it introduces the history of television commercialization experiments that have been conducted since before World War II, along with actual test equipment.
After that, the exhibit introduces Showa era television history with spatial reproductions. In the Showa-era, many people gathered around televisions on the streets to watch pro-wresling and Sumo, and the television coming to houses was a big event within the household. And then, the television spread in ordinary households and continued to the history of the NHK television era.
The left side shows the history of technology innovation, and the right side shows the history of broadcasting programs. The marriage of the current Emperor and Empress Emeritus, the first Tokyo Olympics, the landing of the Apollo 11, and the "Oshin" boom that came put from the diversification of television... You can learn the emotions of the time from the narration script and composition documents.
After learning, you may go on to the "Theme Exhibit Zone" on the 2nd floor. Here, four displays themed on drama, Olympics, music, and children's programs are shown. There are many mechanisms that which both adults and children can have fun.
There are also areas where you can experience 8K super high-vision videos and a broadcast experiment studio where you can experience becoming a newsreader. Here you can learn the technology and history of NHK.

the Logistics Museum in Takanawa is a facility where you can learn the history and present of logistics.
On the first floor, "History of Logistics Exhibit Room", you can learn the advancements of the logistics industry from the Edo to Showa era.
In the Edo era, under the instruction of Ieyasu Tokugawa, a transportation system called "Demmasei" was created along with the development of the transportation network centered around Edo. Here, what role the inns play in the process and how the Hikyakus were able to transport between Edo and Osaka in three days are shown. The "rise of the logistics industry" can be understood in this exhibit, making it a great opportunity to learn the Edo period culture from a profound perspective.
In the Meiji era, the logistics industry was modernized. With the Rikuunmotokaisha (later as Naikokutsuunkaisha) found at Meiji 5 at its center, a nationwide transportation system was created. Also, around the same time, trains started to run between Shimbashi and Yokohama. Long-distance transportation methods shifted from horses and ships to trains.
And in the Showa era, the "Takuatsukai", a similar service to modern delivery, began. After the war, new transportation methods such as airplanes and trucks began to show up, and the logistics industry went through a change. The exhibit shows the change not only through photos but also with real cargo tags and advertising pamphlets. It also shows the evolution of packaging methods in detail.
On the underground floor, "Modern logistics exhibit", you can learn about the modern-day logistics industry. There are panel displays that introduce the fundamentals of logistics, easy to understand even for children. Also, models of logistic transportation methods such as cargo trucks, ships, and planes are shown. In a large-scale diorama that shows a land-sea-air logistic terminal, you can understand the flow of logistics while watching the vehicles move from a bird's-eye view.
Also, on the 2nd floor, there is a "Hakobikurabe" experiencing spot where you can experience old transportation tools such as the tenbinbou and shoiko that can be seen on historic TV dramas.

Opened in August 1998, the museum house many sources which tells us about the history of distribution such as the Denma Shuinjo (red seal license) from the Edo Period and Nishikie (color print) of railways. On the second floor, there is a video room where you can watch information related to distribution.

Increase Your Luck in Minato, Tokyo! Go on a Trip to Get All of the Popular Goshuin Stamps While Riding on a Rental Bicycle

Collecting goshuin has been attracting more and more enthusiasts recently as a hobby that anybody can pick up casually. Minato, Tokyo also has many miracle-working shrines and temples with a never-ending presence of goshuin enthusiasts. Although it would be possible to visit several shrines and temp...

Support tourist spots that are doing their best! Special feature on tourist facilities in Minato-ku, Tokyo, where infection control measures are in place

A complete ending to the novel coronavirus is still not in sight. The size of the impact that these infections have had on the tourism industry goes without saying, and there have been more than a few tourist spots in Minato-ku, Tokyo that have been forced to impose self-control on their operations....