The Yurikamome Is Not the Only Option to Go to Odaiba! Full Comparison Between Odaiba Rainbow Bus & Tokyo Cruise 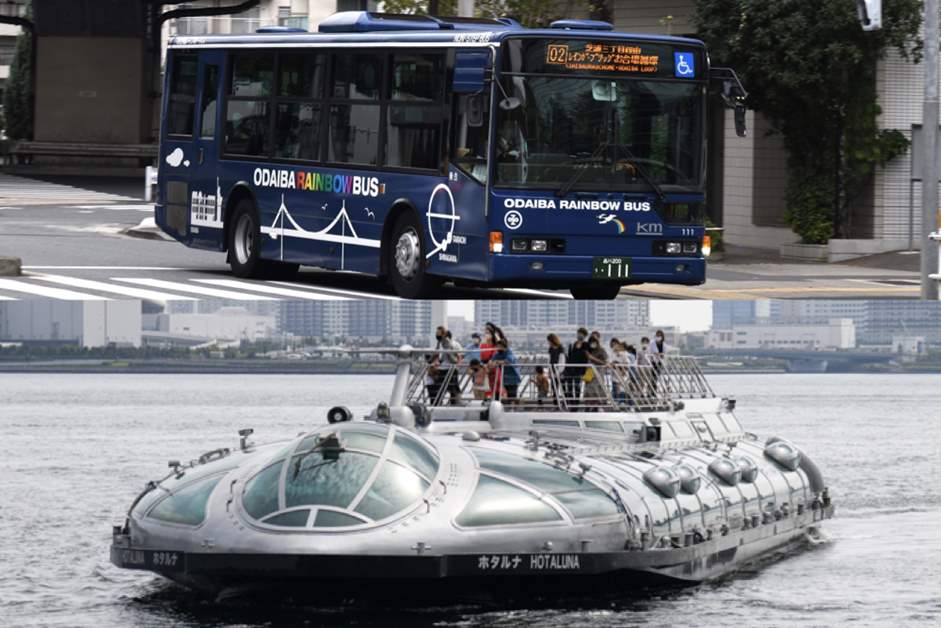 Trains, subways, buses, water taxis… A variety of transportation is available in Minato Ward, Tokyo. Here, we will focus on two public transportation methods that connect the inland Minato and Odaiba.

"Odaiba Rainbow Bus" departs from Shinagawa station, crosses the Rainbow Bridge, and circulates around Odaiba. There are two routes: 01 goes via Tamachi Station East Exit and 02 goes via Shibaura 3-Chome, and the two routes are mostly the same. It takes around 17 minutes to get from Shinagawa Station to Odaiba Marine Park Station. It runs every 10 to 20 minutes from 7:00 a.m. to 10:00 p.m. on weekdays and weekends.
The blue-colored bus is reminiscent of the blue Tokyo Bay. Under the front windshield, you can see the letters "ODAIBA RAINBOW BUS" and the Minato Ward symbol, a seagull. Two of the buses that are in operation today have a special Tokyo Joypolis livery.
The five main attractive points of Odaiba Rainbow Pass are the following:

Let's experience the Odaiba Rainbow Bus from Shinagawa Station to Fuji TV (Aqua City Odaiba).
To get to the bus stop, you take a right from the Konan Exit of Shinagawa Station and descend the stairs with the boarding area information. There is an elevator close to the stairs and is suitable for families with a stroller.
The bus will arrive after a few minutes' wait. Ride on from the front of the bus and pay as you ride on.
The 25-seater bus has wider aisles than the city municipal bus. Many commuters use the bus in the morning and evenings, so there are poles and handrails that you can hold on to.
Soon after departure, voice guidance will begin. The announcements will be made in both Japanese and English.
After crossing a few bridges over the Shibaura canals, suddenly we're on the loop of Rainbow Bridge. After looping and going up, you can see Tokyo Bay on the right side.
After running parallel with the Yurikamome, we finally arrive at Odaiba. The bus stops at Odaiba Marine Park, Daiba 2-Chome (Tokyo Joypolis), and Fuji TV (Aqua City Odaiba).
If you look above after hopping off the bus, you can see the Fuji TV building that we see a lot on television. I felt that it was very convenient to be able to go to Odaiba from Shinagawa Station directly.
Odaiba Rainbow Bus Official Website
https://www.km-bus.tokyo/route/odaiba/

"Tokyo Cruise" is a water bus that operates on Sumida River and the Wangan Area. Here, we will introduce the route from Hinode Terminal to Odaiba. The route takes around 20 minutes and runs twice on weekdays and 10~11 times on weekends. Of those runs, the weekday runs and three of the weekend runs are run by the flagship "Hotaruna".
Hotaruna, which is designed by "Galaxy Express 999" author Reiji Matsumoto, has an appearance like a spaceship with silver coloring and gullwing doors.

These are the five reasons to choose Tokyo Cruise:

- Can easily experience ship riding in Tokyo Bay
- The scenic view of Tokyo Harbor
- Being able to ride on Reiji Matsumoto designed ships
- In the special design ships, the voices of guides are done by famous anime characters
Being able to enjoy the ocean scenery is something you can only experience by riding on a ship. The Hotaruna has an open-roof observation deck on the top floor, so you can enjoy the 360 view.

Hinode Terminal is a one-minute walk from Yurikamome Hinode Station. You can also get there by walking 15 minutes from JR Hamamatsucho Station. The terminal has a waiting space, so you can wait there after buying your ticket at the vending machine. (One-way: 860 yen for Hotaruna, other ships: 520 yen)
The Hotaruna that carried passengers from Odaiba will arrive at the pier. The gullwing doors open, and into the "spaceship" we go.
The 120-people carrying ship is covered in windows, letting sunlight inside with a futuristic build. The driver's seat even looks like a cockpit of a spaceship pilot.
After departing, an announcement by the "Galaxy Express 999" train conductor. "Welcome aboard the Hotaruna."
The deck gives you access to a 360 panorama of Tokyo Bay. The body of the Hotaruna reflects the clouds like a mirror, quite a splendid view. After a few minutes, the Rainbow Bridge appears in front of us. It's a different powerful sight, looking at the bridge from below!
After going under the Rainbow Bridge, we go through Shinagawa Third Daiba and Third Daiba, which are where the name "Odaiba" derived from. We then go towards the terminal inside Odaiba Marine Park. The Fuji TV building, Aqua City Odaiba, and Decks Tokyo Beach get closer as we get excited.

In this article, we introduced two ways of access to Odaiba. Taking the two different methods when going and coming back may be a good option. Many events will be held at Odaiba in the future, so why not go there using one of these transportation methods?
Categories
Tweet

At the beginning of autumn when the temperature drops, don't you think it would really help if there was a nice place indoors to go have fun with your family? Here I'll introduce you to "Legoland® Discovery Center Tokyo" at DECKS Tokyo Beach, one of the most popular indoor sightseeing spots in Minat...

In the studio of the Japan Candle Association built inside Kameyama Candle House Aoyama in Minami-Aoyama, Minato Ward, Tokyo, you can experience original aroma candle making in a 2-hour lesson. You don't need to have to gather any equipment. Aroma candle making is getting more popular as an easy hob...