A luxury residential area since the Edo period? The reason why Minato has so many temples & shrines 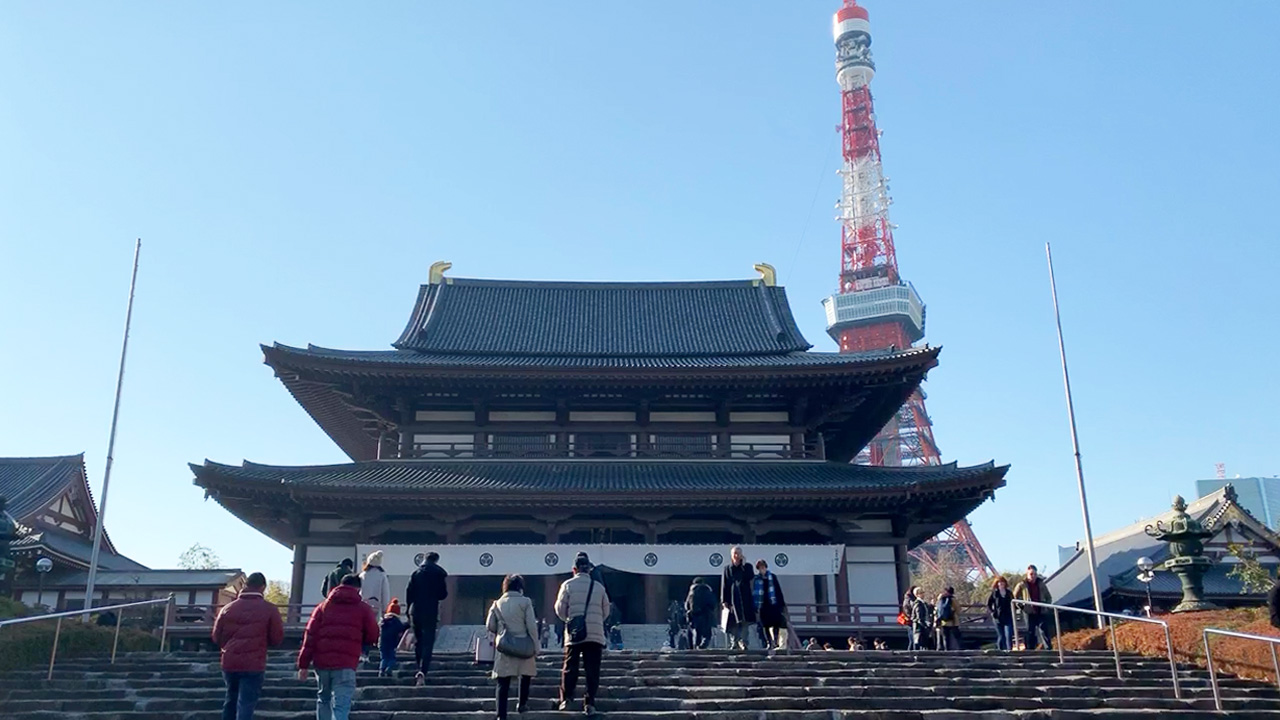 Have you ever been stopped in your tracks by a beautiful shrine appearing out of nowhere between the modern buildings of Minato-ku? That's no surprise - there are about 40 shrines, and 280 temples in Minato-ku alone.

Minato-ku has had areas of high ground since even the Heian period, so many temples and shrines have been built there. In the Edo period, lots of Daimyo's mansions were build there, along with many temples as it was a key security point at Edo's entrance along the Tokaido route. At the end of the Tokugawa period, Japan's first foreign diplomatic establishments were established at four temples including Zenfukuji. In the Meiji period, the Daimyo's mansions were turned into other mansions and embassies. It may not be an overstatement to say that this history is what lead to it becoming the luxury residential area it currently is.

Zenpukuji was founded by Koumi Daishi Kukai in 824 and is said to be the second oldest temple in Tokyo after Sensoji in Asakusa.
It is said that the oldest ginkgo biloba tree (a designated national treasure) in Tokyo was seeded by the founder of Jodo Shinshu, Shinran when he visited Zenpukuji and inserted his cane into the ground. It is estimated to be over 750 years old. At the end of the Bakumatsu period, the first American consulate was set up by Harris, and now a monument stands in it's place.

This temple was founded by the Buddhist monk Kōbō Daishi in the year 824, the first year of the Tencho era of the Heian period. Shinran, a monk designated bodhisattva, visited this temple in the Kamakura period. The priest Ryoukai who received him had such esteem for Shinran's virtue that he converted the entire temple complex to Jodo Shinshu (True Pure Land School) Buddhism. During the Bakufu (the closing days of the Tokugawa Shogunate), the first American envoy, Townsend Harris, was received here. This temple, where the bonds of Japanese-American friendship were deepened, was also frequently visited by such eminent figures as Yukichi Fukuzawa and Masuda Takashi, who built the foundation of modern Japan. On the temple grounds, the "Ginkgo Tree at Zenpukuji" has been designated as a protected natural monument, it is over 750 years old.

The three gods Susano-no-mikoto, Kunishinarihime-no-mikoto and Ōna mudji-no-mikoto are worshiped here, and they were enshrined in the year 951 near what is now Akasaka 4-chome.

By the order of the eigth Tokugawa Shogun Yoshimune, it was transferred to it's current location where the Asano family house was located in 1730. The current shrine was expanded at this time and has been designated as an important cultural asset of Tokyo, escaping many earthquakes and war damage.
The Akasaka Hikawa festival is held in September every year, and stands out with the portable shrines surrounded by 13 Edo style floats, since the god of Yoshimune was highly venerated by the Shogunate. Even today, in the state-of-the-art city where many skyscrapers stand, this unique "Edo festival" still takes place.

One of the ten shrines of Tokyo. Founded in 951 (Tenryaku 5), the current shrine was built in 1729 (Kyoho 14), on the orders of the 8th Tokugawa shogun of the Edo era, Yoshimune. Since then it miraculously escaped being damaged in the Great Kanto Earthquake and is designated as a Tokyo cultural property that exists as it did during its original construction. The grounds include great numbers of Edo era sights, from natural monuments to torii gates, stone lion-dog guardians, hanging lanterns and more. It is well known as a marriage shrine, with many weddings held there.

The Shiba Daijingū shrine, which worships the two pillar gods of Ise shrine (Amaterasu Omikami and Toyouke no Ookami) was founded in 1005.

Initially it was settled in Īgura-san (present Shiba Park) and was called Shiba Shinmeigū Temple, but was moved in the Keicho period to it's current location and renamed in 1872. In the Edo period, it prospered under the protection of the Tokugawa Shogunate and now enjoys the reverence of many people as the "Ise of Kanto". The festival held in September is famous and called "Daradara festival" or "Shōga festival".

According to the shrine's history, it is one of several ancient shrines in the city used to house the divided spirits (bunrei) of the Ise Shrine during the middle of the Heian Period. It got its name of Shiba-daijingu starting from the Meiji Period, before which it was called by other names including Iikura-shinmeigu and Shiba-shinmeigu. The name of Shiba-shinmeigu is known for the famous "Megumi Fight" that took place in March 1805 inside the shrine, where Kanjin-sumo wrestlers such as Yotsuguruma Daihachi and Mizuhiki Seigorou fought with the Megumi-no-tobi, a group of firefighters who considered the area their territory. Even back then, the Minato ward lying in front of the shrine's gates was a lively business district. During the Edo Period, the shrine was a thriving venue for entertainment such as sumo matches and theatrical performances, which were allowed in the shrine grounds. The theater was a type of Edo-sannomiya theater, and is said to have been first held inside Shiba-shinmei in 1645. In September of every year, the "Daradara Festival", an event supposedly named due to its long duration (daradara means lengthy), is held, during which ginger is widely sold inside the shrine and its vicinity, giving the shrine its nickname as the "Ginger Market". As famous as the "Betterazuke market" of Kodenma-cho, the festival was such an enjoyable event for Edo commoners that it was even depicted in ukiyo-e art. During the festival, ginger, chigibako, and amazake are sold. Chigibakos are oval boxes made of cypress, said to bring additional clothing when put into a cabinet, a good luck charm of sorts, whose name comes from the idea of a thousand pieces of wood (chigi) leading to a thousand pieces of clothing (chigi). Beneath the stairway is a savings mound built to commemorate Makino Motojirou's achievements in establishing the Real-estate and Savings Bank (Fudo-chokin-ginkou).

Zojoji - The family temple of the Tokugawa Shogunate

Zojoji is one of the seven headquarters of Jōdoshū sect. It was founded in Edo Kaizuka (near the current Hirakawacho in Chiyoda-ku) by priest Yuuyo Shosu. With the expansion of Edo castle, it was transferred to its present location by Tokugawa Ieyasu in 1598.
The Sangedatsumon gate standing at the front of Zojoji temple was built in 1622, and it is designated as an important national cultural asset as the oldest existing wooden structure in Tokyo.

The Main Temple of Jodo Buddhism. On par with the Kan'ei-ji in Ueno and home to the mausoleum of the Tokugawa Shoguns, it is the resting place of 6 of the warlords, Princess Kazu (Lady Seikan'in-no-miya), and the mothers of the shoguns.

Sengakuji - the temple where the 47 Ronin sleep

Founded by Tokugawa Ieyasu in 1612 in the area of Sotosakurada, close to Edo castle. It was destroyed by the Oke-machi Fire of 1641, but due to the efforts of Mohri, Asano, Kutsuki, Niwa and Mizutani it was rebuilt in the present Takanawa area.
On this basis it became a family temple of the Asano family, and after the Akō incident also known as "the revenge of the 47 ronin" occurred in 1702, the Harima Akō clan lord Asano Takumi no Kami and the 47 ronin were buried here. In addition, there are many things related to the 47 ronin in the grounds, including the Ako Masterless Samurai Memorial Hall.

The famous Sotozen temple was built by Ieyasu Tokugawa in the year 1612. Home to the tombs of the Asano clan and the Forty-Seven Rōnin of the Akō Incident, visitors can also see various objects and landmarks related to these legendary warriors, such as the Chikara-no-Ume plum tree. The Gishi Festival, which takes place on December 14th, the anniversary of the Akō Incident, attracts many visitors from all over Japan. Additionally, the Spring Gishi Festival takes place here from April 1st to 7th. 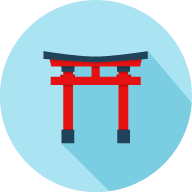 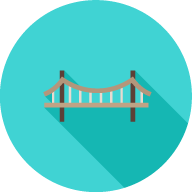 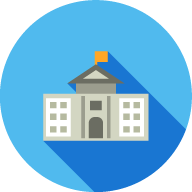 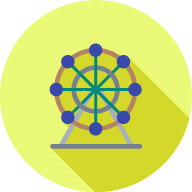