A one-day pass for the Minato City Community Bus "Chi-Bus", a stopover trip from Roppongi Hills to Aoyama to Akasaka-mitsuke. 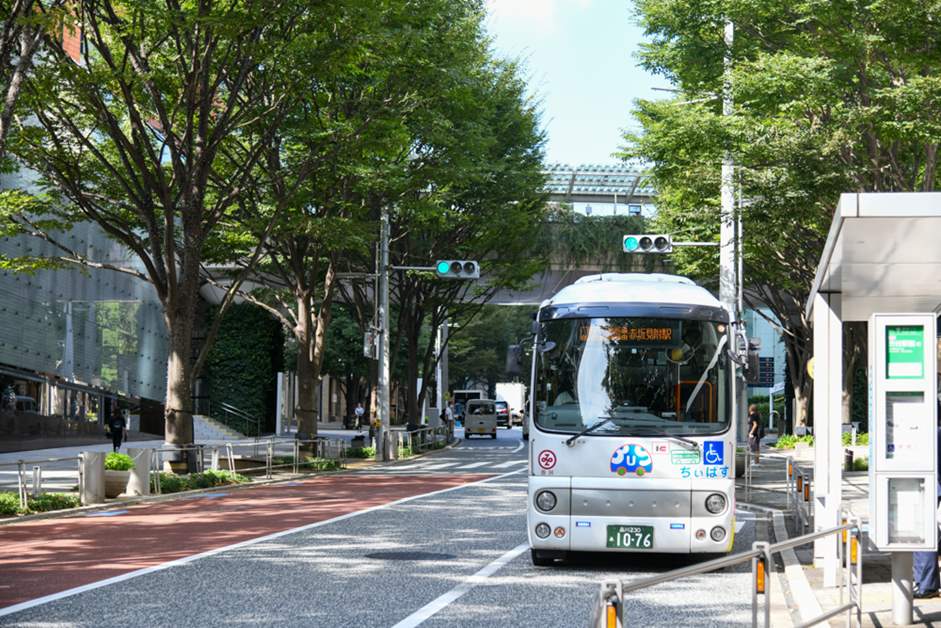 When you walk around Minato City, you often see a little white bus. This bus is called "Chii Bus," a Minato City community bus. When you hear the term "community bus," you may think of it as a "citizen's footstep" for daily life, but Chi-Bus is also convenient for sightseeing purposes. Moreover, the fare is 100 yen per ride no matter where you get on and off, and a one-day pass allows unlimited rides for 500 yen, which is a little more economical than other transportation systems. This time, I would like to take a short trip in Minato City by Chii Bus.

Chi-Bus" operates on eight routes: the Tamachi Route, Akasaka Route, Shiba Route, Azabu East Route, Azabu West Route, Aoyama Route, Takanawa Route, and Shibaura Konan Route. The "Chii Bus" is marked by the logo of the word "BUS" in blue letters, which was selected from among publicly solicited applications. Four types of buses, illustrated by elementary and junior high school students in Minato City, and two types of EV buses, for a total of six types, are running.

There are more than 200 stops along the entire route, and the fare is 100 yen per ride no matter where you get on or off (the second preschool child accompanying a passenger of school age or older rides for free). Moreover, a one-day pass, which is shared with the Odaiba Rainbow Bus from Shinagawa Station to Odaiba, costs only 500 yen and allows unlimited rides, making it a very wallet-friendly means of transportation.

Three of the eight routes depart from or arrive at Roppongi Hills. This time, I chose the "Aoyama Route" among them to enjoy a stopover trip.

The Aoyama Route is a 42-43 minute route that departs from the bus stop on the first floor of Roppongi Hills Mori Tower and goes to the stop in front of Akasaka-mitsuke Station, running every 20 minutes from 7:00 to 20:00, or you can take the reverse route back to Roppongi Hills.
While waiting at a bus stop with a bench, a bus a little smaller than a local bus came in. It was very cute with a heartwarming illustration on the side of the body. We boarded the bus together with people who seemed to be on their way home from shopping. As soon as we departed, we were soon on Roppongi Keyakizaka, with a refreshing view of the tree-lined avenue spreading out before us.
The bus heads toward Minami Aoyama, passing through Nishiazabu with Roppongi Hills in the background. The bus stops at "Minami Aoyama 6-chome" and gets off at the first stop.
The Kotto Dori neighborhood, where this bus stop is located, is an area where fashionable cafes and general merchandise stores are concentrated, and at the same time, it is dotted with a variety of art spots.
The Nezu Museum of Art, which holds a variety of special exhibitions of Japanese and Oriental art throughout the year, the Taro Okamoto Memorial Museum, which is located in the renovated studio and residence of the painter Taro Okamoto, the Yok Mok Museum, which houses a collection of Picasso's valuable ceramic works, and the Shotaro Akiyama Museum of Photography, which is located in the renovated studio of photographer Shotaro Akiyama, are all located nearby.
From this area, Omotesando is within walking distance. I enjoy window shopping on Miyuki-dori, a brand street, and take a quick stroll. While I was there, I saw Chi-isu passing me and running down the tree-lined avenue.

Established in 1945, the museum houses 7000 items, mainly antique works, and teaware collected by the first generation businessman, Kaiichiro Nezu (founder of Tobu Railway). The garden, with a tea room, is known as one of the quietest and excellent gardens in Tokyo, taking advantage of the natural atmosphere, incorporating the mountain stream that runs on a slope. You can enjoy the changing leaves in the garden in the fall.

The old atelier of Shotaro Akiyama's residence in Minami-Aoyama, Tokyo was opened to the public as the "Shotaro Akiyama Photographic Art Gallery" on June 24, 2007. Shotaro Akiyama said to his family, "Please help me turn my atelier into an art gallery. I want to display my art collection too." After his passing, his family processed his enormous volume of photo films to establish the museum in his memory. The building itself has been renovated for structural and operational purposes, but the basic designs have been preserved as much as possible, while his work materials from his base of operations as a photographer at the "Akiyama Studio" and studio/atelier "Yamayoso-tei" in Tohoku have been reused to decorate the gallery. Various pieces by Shotaro Akiyama are displayed to promote artistic photography.

After enjoying shopping and dining in Omotesando, take the Chii Bus again from the Omotesando Station bus stop and continue toward Akasaka on the wide arterial road of Aoyama-dori. On the way, you will see a view of Stadium Street with a large signboard depicting the Yakult Swallows players standing in the window on the left side of the car. In addition, in-train announcements are available in English, and the in-train monitor displays in English, Chinese, and Korean as well, so foreign tourists can use the bus with peace of mind.
And when you get off at the "Aoyama 2-chome Intersection," you are right in front of the "Meiji Jingu Gaien Icho Namiki," one of Minato City's most famous landmarks. On the green-arched sidewalk, you will see runners and dog walkers throughout the day.
The tree-lined avenue is an especially popular point of interest when the leaves change color. In addition to cafes with terraces, there are benches in the middle of the walkway, making it a great place to rest between trips. Also nearby is the Meiji Kinenkan, a historical building associated with the Emperor and now popular as a wedding hall, so having lunch in the garden here is also a good option.

The Ginkgo Avenue is about 300 meters long. In that span, 146 ginkgo trees are planted about 9 meters apart, creating unique scenery when walking through this tunnel steeped in yellow. The expert in early modern landscape architecture who managed this, Yoshinobu Orishimo, was called a master in the field. The ginkgo trees were placed based on perspective, calculating the gradient of the gently sloping ground and the height of the trees as seen when facing the gallery. This view is like a masterpiece; the beautiful sight of the interwoven trees is exceptional.

You can take the Chi-Bus to Akasaka again, but before that, we would like to introduce you to a relaxing spot just a little bit further away from here.

The "Memorial Park for Mr. Korekiyo Takahashi," where he served as Governor of the Bank of Japan, Minister of Finance, and Prime Minister from the end of the Meiji Era to the beginning of the Showa Era.
The park was built on the site of the former residence of Korekiyo Takahashi, a politician who served as Governor of the Bank of Japan, Minister of Finance, and Prime Minister from the late Meiji Era to the early Showa Era, and made great achievements, especially in the fields of economics and finance. It is also a historical spot that was the site of the 2.26 Incident that took place in 1936.
From the view along Aoyama-dori, the park looks ordinary with playground equipment and benches, but once you step into the back, you will find a pond with a stone bridge and a Japanese garden-like landscape dotted with stone lanterns and stone monuments.
The scenery spread out on the cobblestone pavement is so photogenic that you may forget that you are in the heart of the city. Like Meiji Jingu Gaien Ginko Namiki, this is also a spot with beautiful autumn leaves, and in early summer the hydrangeas are at their best. At the far end of the park stands a dignified statue of Korekiyo Takahashi, so why not take a commemorative photo with the gentle face of Korekiyo and ponder the history that has accumulated in this area?
In addition, in this neighborhood of automakers' showrooms, you can also drop by Honda Welcome Plaza Aoyama, which features Honda's latest cars and a collaborative cafe.

The ruins of the Hontei of Takahashi Korekiyo. Okina was born in front of Zojoji temple in Ansei, as a child of the Shogunate painter Kawamura Shoemon. He was adopted by the Sendai clan, who studied English at the Yokohama Hebon Juku at the age of 11 and went to United States at the age of fourteen. It was sold to the slave from the accommodation, and returned home in the Meiji era after hardship. He entered the political world through the Governor of the bank, and in Taisho 12, he served as the minister of the past cabinet after the Manchurian incident. He had a strong mental power in the English language and the predicament, and was nicknamed "Dharma", but was assassinated here at the time of the 2.26 incident on February 26, Showa 11. With a pond and a Japan garden, the park is a place where hardwood, such as maple, Mokoku and Quercus salicina, colors The Four seasons and entertains visitors.

For more information about Honda Welcome Plaza Aoyama, click here.
Recommended rainy day sightseeing spots in Minato Ward, Tokyo, where you can go almost without getting wet from the station.
https://visit-minato-city.tokyo/ja-jp/articles/414

At the end of the trip, visit a famous temple where countless foxes are waiting for you.

A 10-minute walk from Toyokawa Inari Tokyo Betsuin will take you to the final stop, Akasaka-mitsuke Station. If you are still looking for more fun, you can change here to the "Akasaka Route" and return to Roppongi Hills, taking a side trip along a different route from the one you came in on.

Chii Bus routes cover the entire Minato City, so the more you use your one-day pass, the more you can enjoy sightseeing in Minato City at a reasonable price. For more detailed information, please visit the official website of "Chii Bus".

Takarazuka Revue has fascinated Japanese theater fans for more than 100 years and has its own theater in Yurakucho, Tokyo. Takarazuka" is not only about the acting and singing of the leading stars of each troupe, the fascinating script and direction, and the gorgeous stage sets, but also about the m...

This is the season when various illuminations begin to light up the streets in anticipation of the Christmas season. In Tokyo's Minato Ward, you can enjoy heartwarming illuminations at various locations only available at this time of year. Roppongi, in particular, is one of the most popular areas in...

When you visit Takeshiba Pier or Odaiba and look out over the ocean, have you ever seen a yellow boat that stands out from the crowd? This cute boat is operated by Tokyo Water Taxi. In fact, you can charter this cute boat and order a private cruise with a driver. This time, we ordered a tour of the ...

[Video Article] TEPIA Museum of Advanced Technology, Meteorological Science Museum, Suntory Museum of Art, and other spots in Minato-ku, Tokyo, where you can find hints for "free research"!

The summer vacation season brings an increase in outings with children. While it is great to go out and have fun, it would be great for parents to give their children something to learn while sightseeing. With the theme of "free research" in mind, we have gathered together a list of spots in Minato ...